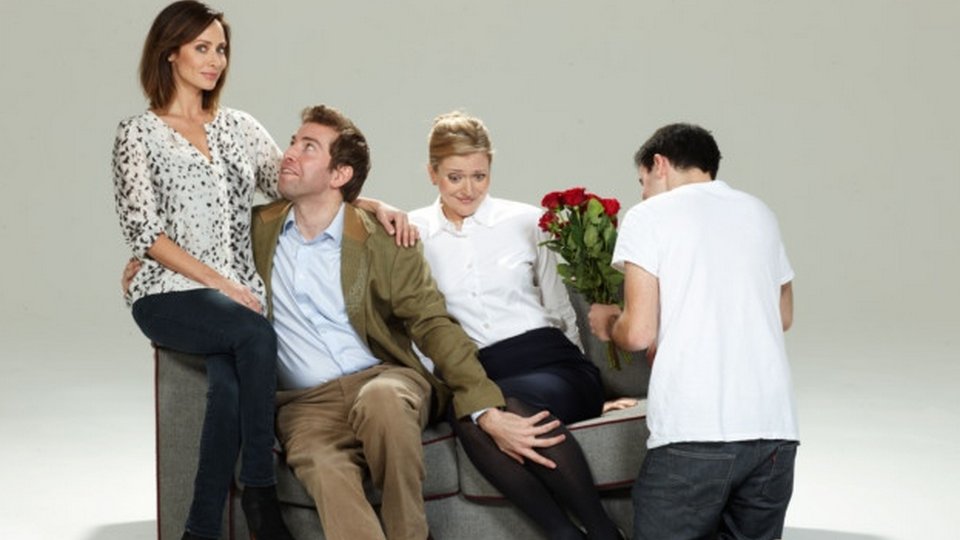 Barbara (Claire Price) devotes her life to her work with the belief that she has passed the age for romance and relationships. Living in the groundfloor flat of her converted house, Barbara agrees to let her old school friend Nikki (Natalie Imbruglia) move into the top flat with her fiancé Hamish (Edward Bennett) whilst they decorate their new house. Barbara soon clashes with Hamish and the two form strong opinions of one another very quickly filling the air with tension and putting Nikki in the middle. Soon it becomes clear that the line between love and hate is finer than ever as things take a surprising turn affecting the lives of all three and Barbara’s basement flat tenant Gilbert (Simon Gregor) who is hiding his own secrets.

Things We Do For Love is a play by acclaimed playwright Alan Ayckbourn that is almost 20 years old. Set in the mid 90s, the story explores the themes of love and friendship as well as betrayal and obsession. What starts out as a seemingly fluffy romantic comedy soon transforms into something altogether darker and surprising. We don’t want to give too much away about how the narrative unfolds as the element of surprise definitely works in the show’s favour.

What we will say is that the humour is dark and you’ll find yourself laughing at points that you soon feel a bit bad about. Nikki is thrust back into Barbara’s life after she leaves her abusive ex-husband and takes up with Hamish, a man who was unhappily married when she met him. Despite labelling each other as best-friends, Nikki and Barbara haven’t actually seen each other in years and their interaction starts off fairly superficial as they recall their school-days. There a are a few lines of dialogue traded that will leave you a little uncomfortable but unable to not laugh.

The set design is really rather quite special. The audience sees the entirety of Barbara’s ground-floor flat pretty much but the flat above and beneath are mostly obscured. The basement flat shows only the very top of the room where Gilbert is painting whilst the top flat only ever really shows you the legs and feet of the actors. At first this just seems a little odd but once you get used to it, it actually adds to the overall piece greatly. As the play goes on you start to realise the part of the stage you can see fully represents the purity and innocence of Barbara whilst the other two partially obscured flats mask more sinister and deceitful activities.

Performance-wise the cast is uniformly superb. Our only criticism would be that Natalie Imbruglia could rein it in slightly as Nikki. She has so much energy that it at times threatens to be over-the-top but for the most part she shows impressive comedic timing often coming out with the funniest lines. Elsewhere Claire Price is superb as Barbara giving the selfish and self-preserving character likeability as she delivers her biting dialogue with gusto. Edward Bennett is equally good as Hamish who goes through quite the transformation over the course of the play proving to be as equally selfish as Barbara at times. Simon Gregor has plenty of scene-stealing moments as handyman Gilbert and he serves up plenty of laughs during the pivotal dinner scene in the show.

Things We Do For Love is black comedy at its finest. Packed with laugh-out-loud moments, the show’s dark tone will leave you feeling a little bad for finding humour in very serious topics. Each of the actors in the show rises to the challenge of the material and the result is an enjoyable comedy under-pinned by a much darker tone that will leave you talking about the feelings it evoked in you long after the curtain drops.