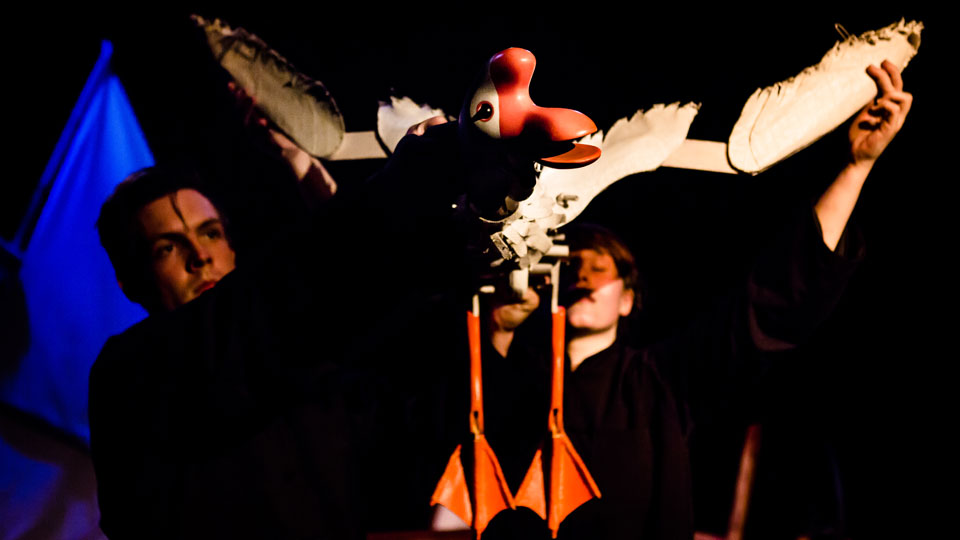 The Flying Roast Goose transports you to Hong Kong, where a young woman (Paula Siu) forms a close bond with a goose she saves from the pot and keeps as a pet. Her life is thrown into turmoil when the island is occupied by the Japanese army during WWII, and she and her pet goose face increasing hardships and the threat of starvation.

The story opens with a cookery routine effectively mimed to sound and music, which both play a strong part in creating the texture of the piece. Siu’s fellow actors Jane Crawshaw and Kristoffer Huball then vary between supporting roles and puppetry, particularly in vividly bringing to life the goose; which flaps, pecks and struts about the stage with affecting realism. Huball’s vocal effects give the bird a voice and complete the illusion. 2D puppets projected onto a cloth are also used to create a sense of place, and The Flying Roast Goose succeeds in offering visual theatre. It has found its natural home in an intimate black box space.

An undoubted highlight of the piece is Paula Siu’s wonderful and warm central performance. The tears she brings forth as she sees her beloved country fall into ruin; and the evocation of an unbreakable emotional bond with her pet (a feeling many of us know) ring true at every moment.

The other performers make an impact too, Kristoffer Huball most especially as a young Welsh soldier desperate for food who warns of the impending trouble to reach Hong Kong’s shores; and Jane Crawshaw as a would-be thief, pushed to desperate measures by the lack of food.

The action is at its strongest during interactions between the actors, rather than through the expositional addresses to the audience. It has the confidence to provide moments of vocal quietness, when the story is moved forward through purely physical theatre. This is at its most striking with the chaos and devastation caused by the arrival of the Japanese, when cooking utensils fall in slow motion.

The Flying Roast Goose is short and sweet, running to little over an hour, and we suspect the piece will find its natural home providing a niche for those who love puppetry and tales of East Asia. It gives you a real flavour of life in Hong Kong before and after the war. It’s beautifully done.