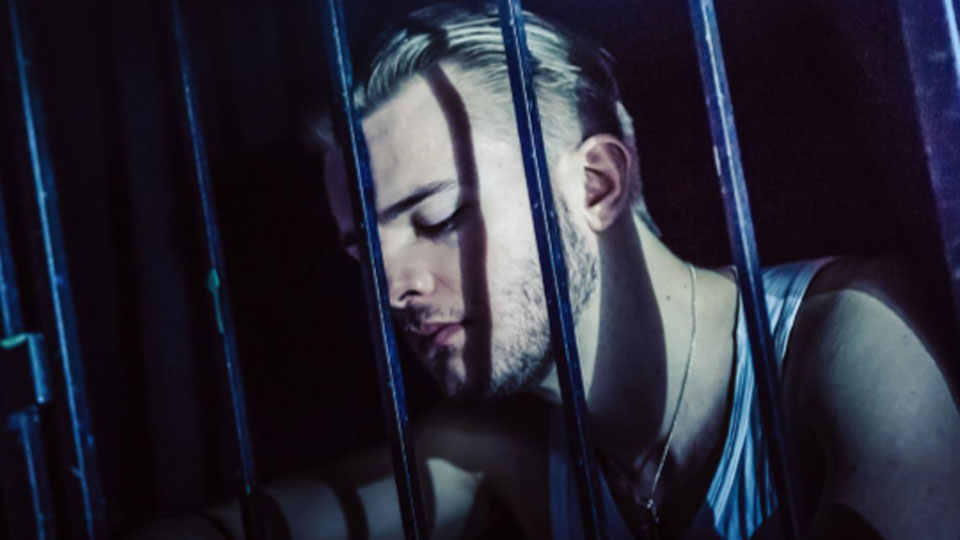 Forget the palatial rooms of Elsinore Castle and the brooding young aristocrat in doublet and hose. Welcome to a grim Liverpool prison where the dubious morals of the court are replaced by fragile loyalties and bitter rivalries.

Hamlet is incarcerated, and Polonius tells him that he’s sorry for his loss. We remember that Hamlet’s father has recently died. This is a production that, between scenes, breaks into contemporary language: an artistic decision that works well for its consistency.

Then Hamlet is stripped, searched, and given prison togs. We’re used to the play stripping Hamlet bare psychologically but here it’s literal in the opening scene and metaphorical thereafter. Thankfully, Adam Lawrence in the title role has an abundance of talent to carry off the part and make it his own, and (the artistic justification for it taken as read) few will object to seeing the buff blond actor in his birthday suit.

Other highlights of the show include the extremely effective stage fights (director Zoé Ford and fight coach Josh Jefferies take a bow) which we have rarely seen better-handled or bloodier than they are here. The bare-knuckle fights are astonishingly realistic and thrillingly executed.

For the most part, the cast (almost all maintaining cock on Scouse accents) impresses. Russell Barnett is an enjoyably sleazy and conniving Claudius, whilst Anthony Kernan crafts an original Polonius: he’s not the old fool we’re used to, and the officious setting of a prison benefits his portrayal. Jessica White convinces as a sensuous Ophelia, and it’s good to finally see a production that makes firm decisions about the nature of her relationship with Hamlet.

Rosencrantz and Guildenstern (Christopher York and Nathan Whitfield) are a great sneering double-act of sarcastic scally lads. What a fantastic way to bring to life these often-overlooked supporting parts.

The direction is skilfully handled by Zoé Ford. The pace is slick, but not at the expense of allowing the actors moments of stillness to externalise their thoughts. Adam Lawrence in particular benefits from this approach. His soliloquies are always excellent, but the one leading up to the rallying-cry of “Oh, vengeance!” is especially electrifying.

There are a few issues working against this production. The prison setting is imaginative and for the most part works well, though the literal slips into the metaphorical, and even that doesn’t sustain throughout the second half. The cast is pretty solid, but Gertrude (Joyce Greenaway) is ineffective, both in performance and characterisation; though in this truncated Hamlet the part is sidelined sufficiently for this to not prove an insurmountable problem.

Those reservations aside, this Hamlet comes recommended on the strength of the lead performance, for the imaginative take on a familiar tale, and for its unrelenting commitment to the brutal world of the story established from the opening moment. It’s a great introduction to the tale for Hamlet virgins, and may well reinvigorate a passion for the Danish prince for the shagged out veteran.