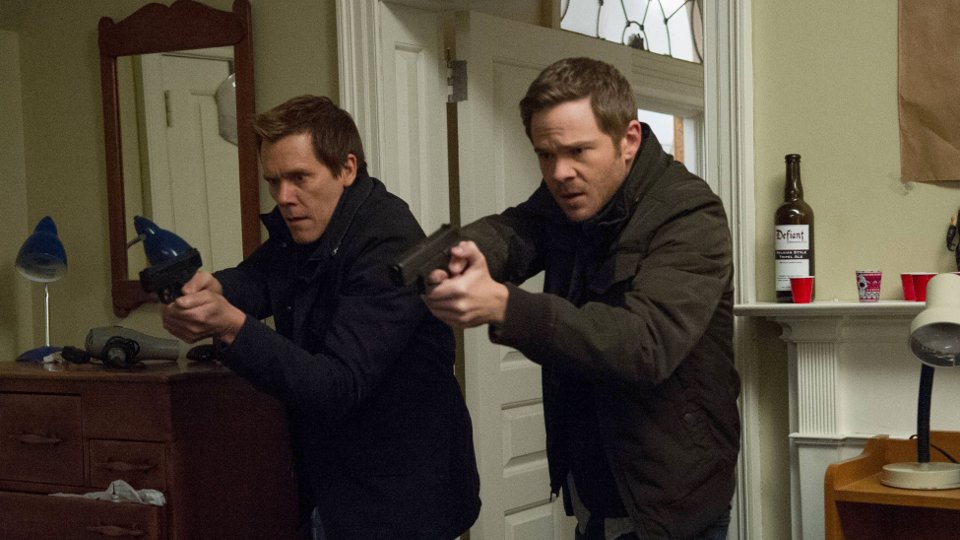 We’ve got around 8 months to wait until the new season of The Following but that’s not stopped our brains from thinking about what we want from the upcoming season.

If you haven’t seen the second season of The Following we suggest you stop reading now. If you have and want to know our thoughts on the next season then keep reading.

The second season of The Following recently came to an end and despite a few patchy moments it was a strong season for the FOX thriller. Joe Carroll (James Purefoy) is back behind bars, Claire (Natalie Zea) is alive and Ryan Hardy (Kevin Bacon) lives to fight another day.

Emma Hill (Valorie Curry), Luke (Sam Underwood) and Lily Gray (Connie Nielsen) are all dead but Mark (Sam Underwood) is still on the loose. The season 2 finale ended with Mark being picked up by an unknown driver leaving fans speculating as to whom the accomplice is.

We’ve been having a think about what we want to see when the show returns for a third season. Keep reading to find out:

1. A more focused storyline. Season 2 got bogged down with too many storylines going on at once. There was the ‘resurrection’ of Joe, the diversion of Korban, psycho Lily and her family of killers, Joe’s surrogate daughter Mandy (Tiffany Boone) and an ongoing battle between Joe and evangelical Kingston Tanner (Tom Cavanaugh). Suffice to say some episodes felt a bit too filler for our liking so we want one central theme throughout the season like season one.

2. Fewer credibility-stretching moments. We know that Ryan is modelled on 24’s Jack Bauer but seriously is he invincible? We don’t want to see him getting run over then running off unscathed as it’s all just a bit silly. Season 2 sometimes exchanged logic and reality for cheap thrills so season 3 needs to bring it back down to earth just a little bit.

3. A shift in Joe and Ryan’s relationship. With Joe behind bars we want to see the two working together to try and locate Mark. Their chemistry is the centre of the show so we’re hoping for more scenes with the two characters together in the next season. It’s been confirmed that Joe won’t be breaking out of prison so it should be an interesting dynamic.

4. No characters without purpose. By that we mean we don’t want characters thrown into the mix for no other reason than to make up the numbers or provide convenient plot twists. Gina Mendez (Valerie Cruz) added nothing other than to surprise viewers with the reveal that she was cult member Jana’s (Leslie Bibb) estranged partner. The return of Claire was a great twist but then she was stuck doing nothing for episodes at a time.

5. Maxton forever. It may have been the slowest getting together on TV this past season but the kiss between Max (Jessica Stroup) and Weston (Shawn Ashmore) was a lovely moment. We hope they are still together in season 3 and progressing their relationship.

6. More Max Hardy. After the episode where she was kidnapped by The Huntsman, Max was relegated to the side-lines which was a real shame. Actress Jessica Stroup is brilliant and there’s more to Max’s character than we’ve seen so far. We want a much bigger role in season 3.

7. Mark’s storyline to open up the bigger season 3 threat. The fact that Mark had an accomplice to pick him up at the end of the season suggests there’s more story left to tell with his killer family, even though the core members are dead. We want the rest of Mark’s storyline to connect into the overall arc for the season rather than be a secondary plot alongside it.

8. Carrie Cooke (Sprague Grayden). The pesky journalist provided some great moments in season 2 but she was completely absent from the finale. We want Carrie to return and cause more trouble in season 3. Even though she has feelings for Ryan her dedication to getting the scoop is much stronger.

9. Jaw-dropping twists. There have been plenty of these over the show’s two seasons so far but we want our minds to be blown with season 3. The writers have the opportunity to reboot the show now the Joe arc from the first two seasons has come to a conclusion.

10. Scarier moments. The darker episodes of the show are always the best and season 2 wasn’t as dark as season 1. We want to be creeped out, grabbing for a pillow to hide our faces and generally on edge as much as possible throughout the season.

The Following is expected to return for a third season in the US and the UK in January 2015.

In this article:James Purefoy, Kevin Bacon, The Following