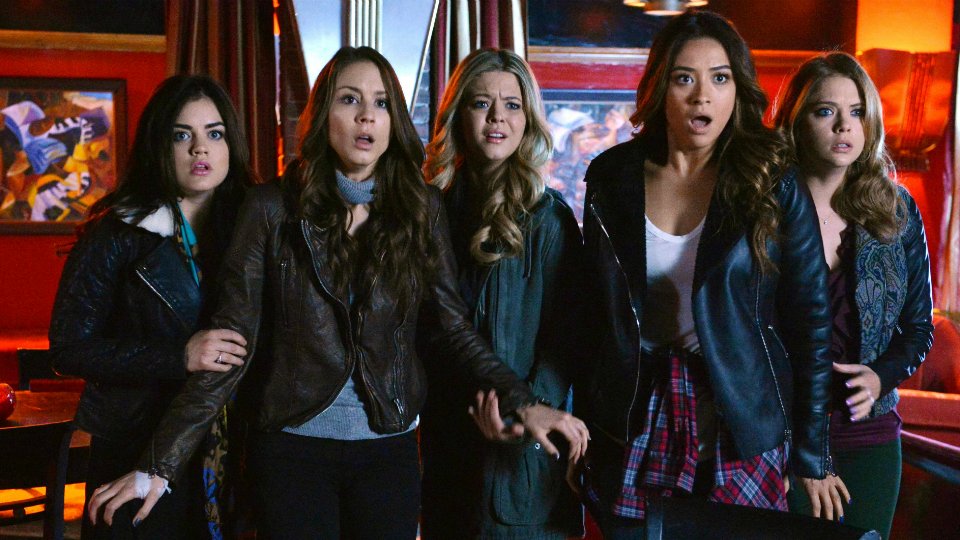 Pretty Little Liars is without a doubt one of the most addictive shows on TV and we’re literally counting down the days until it returns for its fifth season.

If you haven’t seen season 4 of the show and don’t want any spoilers we suggest you stop reading now. If you are up-to-date then keep reading.

During the fourth season of the hit ABC Family show it was confirmed that Alison (Sasha Pieterse) wasn’t really dead and she was on the run from someone she was terrified of. The season finale saw Aria (Lucy Hale), Spencer (Troian Bellisario), Emily (Shay Mitchell), Hanna (Ashley Benson) and Alison saved from the clutches of A by Ezra (Ian Harding).

Unfortunately for Ezra, who was thought to be A for much of the season, he wound up shot with his fate left hanging in the balance as A escaped.

Ahead of the fifth season premiere we’ve put together a list of 10 things we want to see when the show returns.

1. Who killed Mrs DiLaurentis? We want to know who killed Ali’s mum and buried her body at the end of the fourth season finale. Could it have really been A if A was busy shooting Ezra or was it one of A’s many accomplices? We hope there are some juicy reveals coming up in the new season.

2. Ezria to work things out. Ok there’s a huge mountain to climb for these two in season 5. We’re assuming Ezra survives being shot – it has been confirmed that he has a season 5 contract and he appears in the recently released premiere photos – so it’s time he built some bridges with Aria. Trust is going to be the big issue considering he was lying to her for so long as he wrote his book about Ali’s disappearance.

3. Haleb. As cute as Travis (Luke Kleintank) is he’s not the right match for Hanna. With Caleb (Tyler Blackburn) back in town from the fifth episode of the season, we want to see our favourite couple reunite. We’re sure a love triangle will play out but surely Hanna’s heart belongs to Caleb?

4. More of Mona’s (Janel Parrish) backstory. Mona has had a rough and surprising ride over the past four seasons and it was revealed that she had helped Alison to disappear. Up until that point it was presumed that Mona hated Alison so why did she decide to help her? We still think Mona knows more about the A situation than she’s letting on too.

5. Spencer and Toby (Keegan Allen) to enjoy some happiness. The couple has had a tough time of it and season four saw Spencer protecting Toby which angered her friends. Spencer of course also had a bit of a meltdown when she fell back onto her addiction which almost cost her Toby and her friends. We know with the nature of the show that things are never smooth but we’re rooting for these two in season 5.

6. We want to know more about Paige (Lindsey Shaw). Emily’s girlfriend has addressed her anger issues and is happily out. There are lots of theories out there about Paige being A but we’re not sure we buy it. She seems far too protective over Emily to be the person who is causing her so much distress. We do think there’s more to Paige than meets the eye though and want to know what that is.

7. Much more Jenna (Tammin Sursok). Season 4 was too Jenna-lite for our liking and the manipulative mean girl is one of the best supporting characters in the show. With the return of Ali we expect to see sparks fly and this is going to be one bitch-fight we simply don’t want to miss.

8. Jason DiLaurentis. We know that actor Drew Van Acker is committed to Devious Maids but it has been confirmed that he’ll be back for season 5. We want to see how Jason reacts to the news that Ali is still alive and we’re not 100% sure that he wasn’t in some way helping her. Also Drew looks amazing with his shirt off.

9. The Ali backlash. The return of the devious character has to result in a bit of a backlash doesn’t it? After all she’s fooled everyone for so long that there’s got to be a mixture of happiness and upset that comes with her return. We expect Aria, Spencer, Hanna and Emily to struggle having her back in the group whilst many of the supporting characters in the show have plenty of reasons for wishing her dead. We smell fireworks.

10. Melissa Hasting (Torrey DeVitto) to finally get her comeuppance. Spencer’s sister is anything but the clean-cut woman she presents herself to be. Over the past four seasons we’ve had plenty of insight into what Melissa is really like but Ali’s return should uncover plenty more secrets where this character is concerned.

Pretty Little Liars returns in the US on 10th June 2014. A UK release on iTunes is expected later in the year.