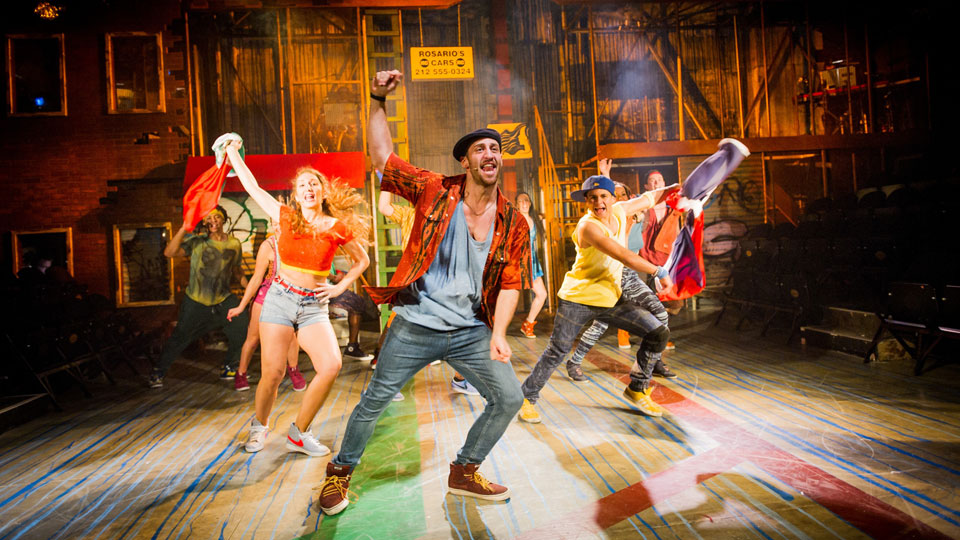 In the Heights has burst into life at Southwark Playhouse. The fresh, vibrant new American musical has reached the UK and hit the ground running. With a live band mixing Latin music with hip hop and rap, In the Heights is an energetic show full of interesting characters and memorable musical numbers.

The show is set in Washington Heights in New York, and follows the lives of a local community, where people from disparate backgrounds work and play together. We essentially follow Usnavi (a brilliant performance from Sam Mackay) the owner of a small shop who is in love with Vanessa (Emma Kingston), who works in a hair salon. The other main plot revolves around the Rosario family, where Kevin (David Bedella) has built up a taxi cab company with his wife Camila (Josie Benson) and they are determined their daughter Nina (Christina Modestou) will make it out of the relative poverty of the Heights through studying at Stanford. But Nina is struggling to pay her way through university, and is also dating her father’s employee Benny (Wayne Robinson) – a non-Hispanic, much to her father’s horror.

In the Heights boasts strong performances and memorable characters. Sam Mackay impresses with the rapid delivery of rap lyrics, whilst both Christina Modestou and Emma Kingston seize their moments in the spotlight with haunting vocals.

As well as the two main stories, we meet secondary characters who are skilfully drawn, and the performances are so good they deserve a mention. Nathan Amzi plays Piragua Guy with disarming charm and perpetual optimism, even though he scrapes a living and is involved in a ‘turf war’ with off-stage character Mr Softee. Victoria Hamilton-Barritt has many of the best and funniest lines as Daniela, Vanessa’s hair salon employer – and boy, does she make the most of them! Hamilton-Barritt is hilarious, to the extent that the audience relishes her every appearance. Damian Buhagiar is also excellent as Usnavi’s young cousin Sonny – a sweeter performance you could not hope to see.

It’s one of the few shows we’ve seen where the large cast of characters works incredibly well. We see their lives in snapshots, but their stories interweave as the audience grows familiar with the community. There isn’t a weak link in this cast, and with the talent involved, the results are magical. A large part of the effect of In the Heights is thanks to Drew McOnie’s exhilarating choreography. The dance routines are stunning, and combined with the music, In the Heights is a feast for the eyes and ears, as well as the heart.

The only downside we perceive is uneven acoustics, where the volume of people on stage and the live music sometimes drown out the vocals, especially when spoken. The mics help, but don’t completely solve the problem. Young ears will be fine: but anyone a little hard of hearing would do well to sit facing the stage rather than at either side.