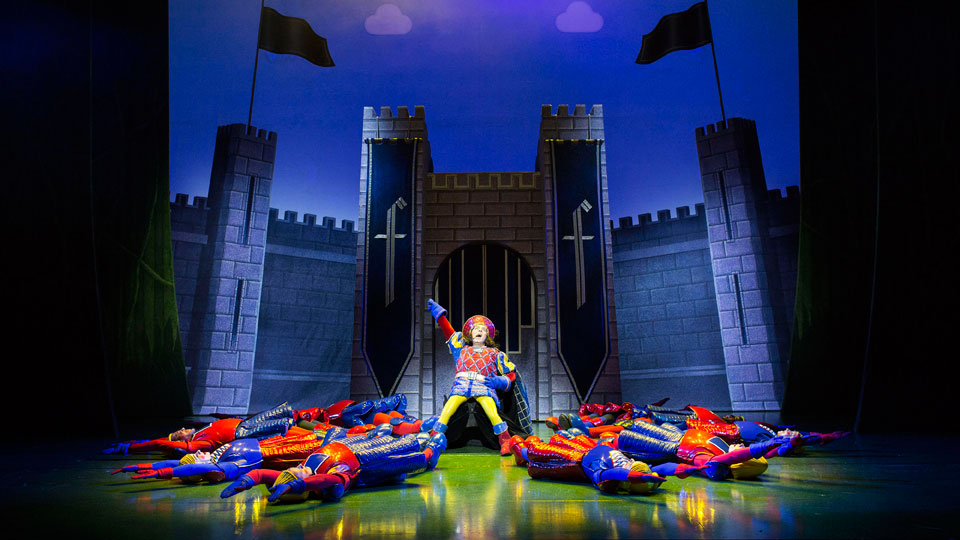 It’s absolutely no surprise Shrek The Musical by Dreamworks theatricals has continually been hailed a huge success. Not only is this one of the most loved stories from the very early noughties but the musical adaptation for the stage has been a constant hit since it premiered on Broadway in 2008 and it’s hugely successful run in the West End. And it’s fair to say, the touring performance, which is now its final UK leg, of the warmhearted green gentle giant is no exception.

The storyline is vastly familiar following the plot of the iconic Scottish ogre, who is on a mission to reclaim his swampy abode from the innocent fairytale creatures who have been left homeless by the ghastly leader of Duloc – a rather self obsessed Lord  Farquaad, who has a few personality trait issues to deal with.

In his endeavour to once again live in peace, he accepts a challenge from the somewhat conceited Farquaad (Samuel Holmes) to rescue the becoming Princess Fiona (Laura Main) from the evil grasps of a larger than life fire-breathing dragon. Along the way, he gains a new companion in the form of a sassy ass and inadvertently falls in love with the princess he is supposed to hand over to become Farquaad’s queen.

The plot in itself is a proven fail safe winner but what makes this show, spectacular, or should I say, Shrek-tacular is the tremendous way it is transported to the stage. This really is a big show with an even bigger heart. From the moment Shrek, played by the excellent Steffan Harri, bursts into view via a giant fairly tale book (which is a bit of a wow moment in itself), he captures the audience with his incredibly endearing Scottish accent and his ability to perfectly break into a catchy song.

What’s not to love about a bunch of affectionate mythical fairytale characters who just want to be adored and accepted for their rather unique ‘freakish’ and endearing ways? There’s a rather vocal gingerbread biscuit, a hysterically confused Pinocchio (with his incredible extending nose) and a trio of dancing blind mice. There’s so many commendable characters in this show, from the big green guy himself, to the no-nonsense Donkey, and the exceptional Princess Fiona herself – who initially appears to be one feisty, no-nonsense lady but soon reveals her inner troubled self when the sun sets and her appearance dramatically changes.

Lord Farquaad is a brilliant comedy centre piece, with his tongue-in-cheek, laughter inducing, almost slap stick sequences, centred around his dwarf like size. Of course he has a huge castle, and a grander than grand horse – after all his grand material possessions are making up for what he lacks in stature. He’s not the only one to become the butt of the jokes – there’s hilarious humour throughout the two and a half hour show. As well as the intermittent ‘fart’ jokes and even a ‘fart-off’ between Shrek and Princess Fiona, to keep the younger members of the audience in raptures, there’s also some witty, more adult appropriate one liners including the conveniently placed and now much to be expected dig at Brexit.

But as well as necessary humour, dance, superb choreography and some worthy of praise musical solo pieces, I can’t possibly forget to mention the hugely impressive mechanical dragon. This is not only a tremendous feat of skill and technical wizardry but adds a huge ‘wow’ factor to the show.

All in all, this is a real laugh out loud show, intermingled with some poignant moments and a truly excellent ‘get up out of your seats’ and dance singalong finale. Six or sixty, you would be hard pushed not to thoroughly enjoy this show!