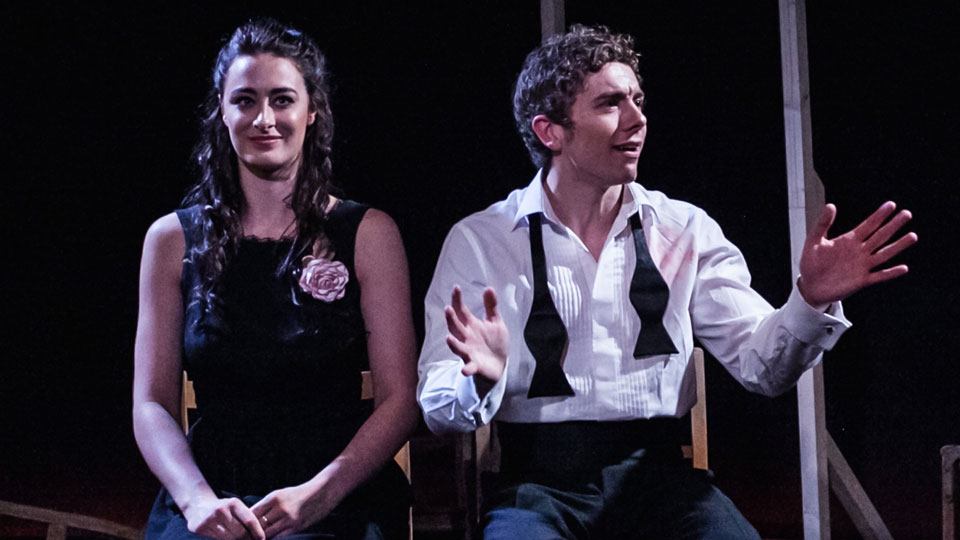 The intimate Trafalgar Studios 2 is currently home to a revival of Neil LaBute’s 1999 trilogy of one-act monologues Bash Latterday Plays, which run along the theme of modernising Greek tragedies for contemporary America.

Thus we hear from a young Mormon father hiding a dark secret; two concurrent monologues from a young couple on the cusp of engagement, though the man has just committed a violent crime; and a young woman who had a child from an underage relationship with her teacher. The themes are heavy and the performances intense.

Out of the three instalments, the first (Iphigenia in Orem) is largely the most successful. An excellent performance by Philip Scott-Wallace certainly helps: he’s wholly convincing as a smiling, happy Mormon, and we find out why he latches onto somebody in a bar in order to confess his story. Scott-Wallace’s American accent never slips, and he creates a character we both want to listen to and care about, even if he’s not entirely sympathetic. It’s the least overtly melodramatic of the pieces and the stronger for it.

It’s followed up by A Gaggle of Saints, which introduces us to John and Sue (Tom Vallen and Dani Harrison), a repellent young couple. Harrison has little to do as Sue other than interject, since her part is underwritten, but she skilfully goes for a comic angle. This makes for a welcome change of tone and later for an alarming juxtaposition. Vallen is terrific as the bigoted and violently homophobic John, and his proud retelling of an act of violence is as nauseating as it is vivid, though the writing lapses into melodrama. Nevertheless, it’s a story that recalls recent footage from Russia and Eastern Europe of crimes against LGBT people.

The final segment sees Rebecca Hickey play a young woman determined to introduce her child to his father – though it’s a life created from statutory rape. Taken on its own, the segment is effective, but it is essentially a retreading of Iphigenia in Orem, and consequently the twist isn’t surprising and it lacks the punch it ought to have.

Whilst LaBute’s dialogue often rings with artificiality, Bash Latterday Plays, although early in his canon, is one of his most naturalistic works. That said, the biggest weakness here is that it’s not entirely thematically satisfying. Two of the three monologues concern the same grizzly crime, diminishing the impact of the second. A lot is made of the Mormon background of the first character, though there’s no reason for it to be integral to the story, and may just be because of LaBute’s own former involvement in that church.

Director Jonathan O’Boyle deserves a lot of credit for bringing the most out of the text with variations in tone, and the actors keep up with a rapid pace of delivery when they need to. The direction and the acting offer more nuance than the writing, which is interesting though only exhilarating in fits and starts.