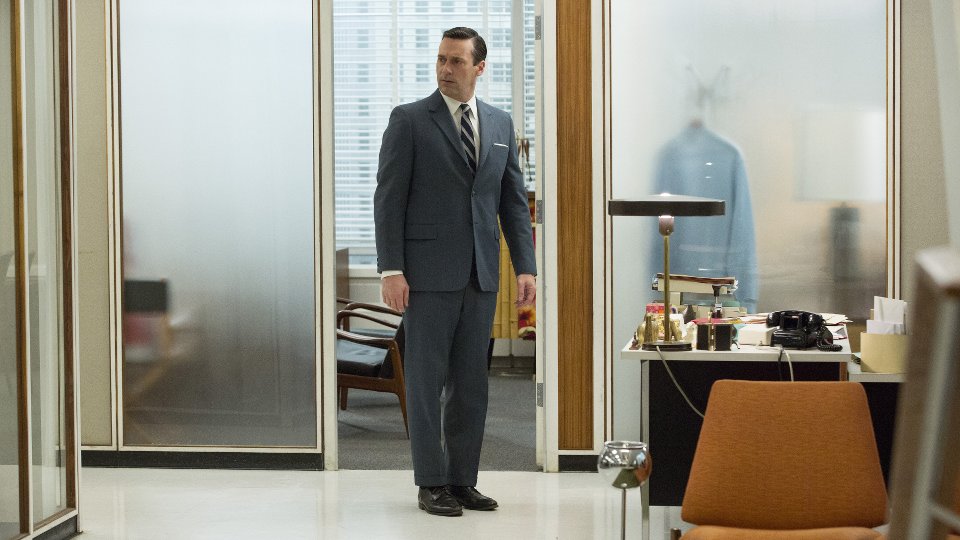 We thought last week’s Mad Men was pretty awkward but tonight’s could have beaten by being even more awkward as Don (Jon Hamm) returned to work.

If you haven’t seen tonight’s episode of Mad Men and don’t want it to be spoiled we suggest you stop reading. If you have seen it and want to relive all the action keep reading.

At the end of last week’s episode, Don was read the riot act and told he could return to SC&P under strict guidelines. Amazingly one of them was working for Lou Avery (Allan Havey) and Don agreed! Well this week saw Don trying to adapt to his new life at work with a lot of resistance.

Firstly he wasn’t happy to be in a small office (he’s now situated in Lane’s old office) and when he walks in for his first day he finds all the staff gathered round being told that the agency has bought a computer which is going to be installed near the front of the office meaning upheaval for the creatives.

Don then found himself being assigned to Peggy’s (Elisabeth Moss) team for new account Burger Chef and boy did she laud that over him. What Peggy didn’t realise though is that being given the account, and a hefty pay rise, was a ruse to get her to deal with Don so no one else in the agency had to. The writing was on the wall from the first meeting where Peggy made it very clear she was the boss and Don responded by refusing to do much of anything. That left Peggy’s other creative John (Trevor Einhorn) to come up with the goods on his own after Don refused to attend the next meeting and left early so Peggy couldn’t tackle him about it.

Instead of doing the work assigned to him, Don became pally with Lloyd (Robert Baker) who was helping to install the new computer. In conversation it transpired that Lloyd was setting up his own computer leasing company. Don saw it as an opportunity to pitch for new business but found himself shot down by Bert (Robert Morse) and reminded of the stipulations of his return to work.

Struggling to cope with the suffocating atmosphere in the office, Don snuck into Roger’s (John Slattery) office, stole a bottle of vodka and proceeded to get drunk (breaking another of the stipulations). Whilst drunk he called Freddy (Joel Murray) telling him he wanted to go to a Mets game but actually he just needed help getting home without raising anyone’s attention. On his way out of the office Don broke into a drunken rant at Lloyd which could spell trouble for him in the next episode.

After leaving the office and waking up with a bad hangover, Don was given a stern talking to by Freddy who told him to get on with his job and beat the partners at their own game showing them that they needed him. The end of the episode saw Don at work, fresh as a daisy and setting about the work Peggy had given him. Has he really turned a corner?

What about the other characters this week? Well Roger headed off with his ex-wife Mona (Talia Balsam) to find their runaway daughter Margaret (Elizabeth Rice) who has ditched her husband and child in order to join a cult. We have to say we suspected something was amiss when Roger met Margaret in the season opener and she was going on and on about forgiving him.

Shortly after arriving Mona lost her temper and drove off leaving Roger to explore life in the cult. After seemingly liking the lifestyle his daughter has chosen, Roger soon lost it and tried to force Margaret to leave with him. The end result was a nasty slip into a lot of mud and a few home truths that he wasn’t ready to hear.

We also got a glimpse of Pete (Vincent Kartheiser) who bumped into an old client whilst at dinner with his realtor/girlfriend and found out his former father in-law had suffered a heart attack. He also got a new business lead in the shape of Burger Chef which was promptly taken off him by the partners and given to Peggy. Seems like there’s no luck in store for Pete so far this season.

Mad Men continues at 10/9c Sundays on AMC in the US and at 10pm on Sky Atlantic HD in the UK.