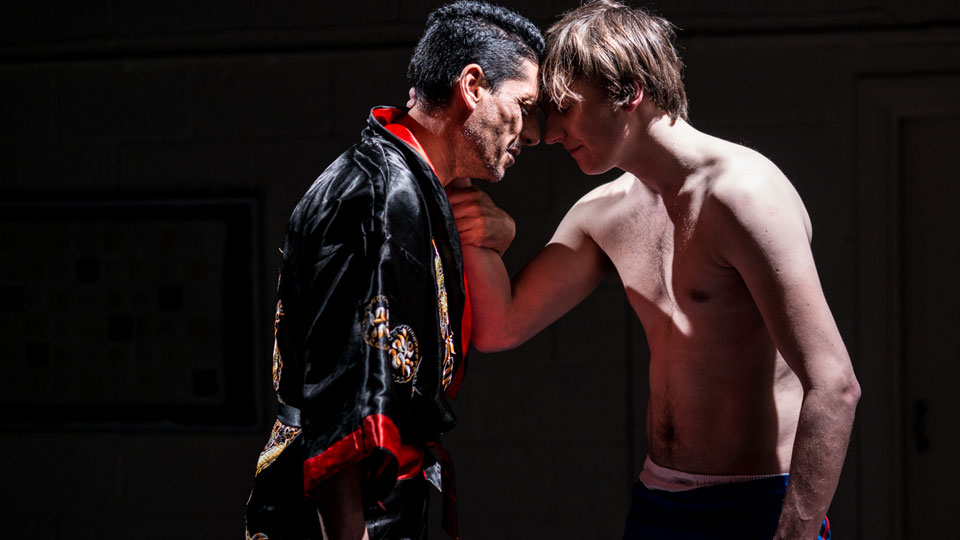 The Tristan Bates Theatre in the West End is host to an evening of two Harvey Fierstein one-act plays united by the theme of AIDS, and how the virus affects the lives of those left behind when it first strikes in the 1980s. Fierstein is best-known for La Cage aux Folles and Torch Song Trilogy, but this production represents the UK premiere of these two short plays.

Up first is Safe Sex, which examines in microscopic detail how fear about AIDS has changed the relationship between Ghee (CJ de Mooi) and Mead (Cole Michaels). What looks to be a night  of passion turns sour when Ghee pushes Mead away and reaches for his list of dos and don’ts to protect themselves against AIDS. Through examining how the rise of a deadly virus has changed their sexual relationship, Fierstein incorporates the wider angle of the changes in perception about gay relationships amongst the rest of society too.

Safe Sex perhaps relies a little too heavily on soap-box speeches, especially towards the end, but on the paper Ghee and Mead are a credible couple, and there’s a great dynamic between actors CJ de Mooi and Cole Michaels which bring the best out of the script. Some unusual choices by director Dan Phillips (intimate kissing whilst the dialogue suggests an argument) are effective too.

On Tidy Endings is probably the stronger of the two pieces, and it’s certainly more emotionally complex. CJ de Mooi returns, this time playing Arthur, whose partner Colin has recently died from AIDS. As he packs up his lover’s possessions and prepares to move out of the flat they shared together, he’s visited by Marion (Deena Payne), Colin’s ex-wife who never stopped loving him.

The play is a painful, funny, deeply touching study of grief, and how the survivors deal (and don’t deal) with it. For such a short play, the  relationship between Arthur and Marion constantly shifts between recriminations and friendship, and Fierstein’s skill as a playwright is matched by the actors who thread their way through the minefield of emotions with conviction. Deena Payne always leaves room for Marion to be sympathetic, whilst CJ de Mooi allows us to dislike Arthur’s acid tongue and self-pity at times. The interactions between Payne and de Mooi are a joy to watch, and you care about the characters so much that by the twist in the tale, you may well be blinking back the tears.

In true Fierstein fashion, both plays are suffused with much-needed humour. In fact, the jokes sometimes feel a little off-kilter and fall flat, but isn’t that life? The character of Marion’s son Jim is created not just for comic effect, but also to reveal the changing family dynamic after Colin lived as a gay man. Child actor Daniel Purves does a terrific job in the part, and he’s in safe hands bouncing dialogue off the impeccable Payne.

The design is low-key, and the real selling points here are in the writing and the acting. There remain a few moments in the production that feel a little rough around the edges (audience laughter unbalanced the performers at times), but we suspect that they will be smoothed out as the run progresses. These are two rarely-produced plays that are well worth seeing, and this particular production packs an emotional punch.

The show supports the Make A Difference Trust.