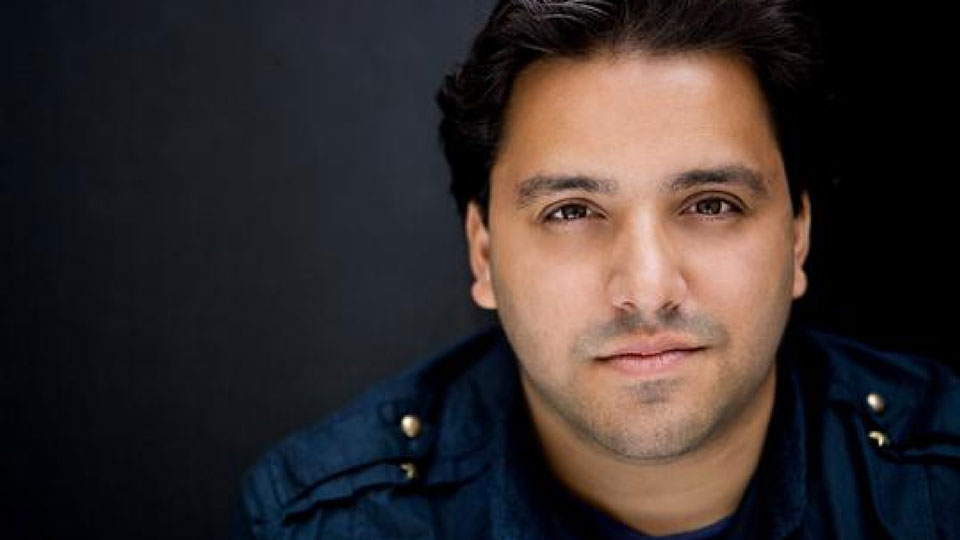 Southwark Playhouse is shortly to host the UK premiere of musical In The Heights.

One of its stars is Nathan Amzi, who will be familiar to UK television viewers for his stint on the third series of The Voice. The actor/singer has established himself with a number of West End roles in musical theatre and in Shakespeare.

We caught up with him to get the lowdown on In The Heights, finding out about the character he’s playing, the vision for the show, and the style of music in what’s lining up to be a must-see production.

Nathan, how are you today?

Great thanks! I’m currently sat having my lunch while revising my Spanish dialogue.

Are rehearsals for In The Heights going well?

Rehearsals are going extremely well at the moment, I’m really enjoying myself but most of all I’m enjoying coming in each day discovering just how talented our assembled cast are! Luke Sheppard (Director), Drew McOnie (Choreographer), Tom Deering (Musical Supervisor) and Phil Cornwell (Musical Director) have created such a great environment in the room which lets us be creative and explore. I get excited watching it all take shape and develop.

Tell us a bit about the show and its style of music.

First off let me say, this show is brilliant. It’s so unique in its style and music; it’s not like a traditional musical at all. The show is set over three days in the neighborhood of Washington Heights in New York. It’s an ensemble piece primarily led by the character Usnavi, brilliantly portrayed by Sam McKay, who owns a tiny bodega (shop).

The show is really about the local community, its culture and their journeys together and the meaning of Home. There’s everything you’d want from a fiery Latin community: fights, love, dancing and great music. I don’t want to give too much away but there are so many twists and turns it keeps the audience engaged from start to finish. One of my favorite things about this show is its music. It’s a mix of hip hop, freestyle rap, salsa and contemporary melodic ballads. The fusion of all these styles is electric. I challenge anyone to come and not be infected by it. You’ll tap your feet and pull yourself through every emotion you’ve got!

What can you tell us about Piragua Guy, the part you’re playing? Will we like him?

I hope you like him!! Piragua Guy is great fun; he’s a street seller selling shaved ice with flavored syrups, essentially snow cones. He’s like the local ice cream man (although he’s in competition with Mister Softee down the street). He’s an integral part to the Latin community, he’s always there same place every day watching the world go by and observing it all. Now and again he gets out from behind his cart and joins in the fun. He’s probably one of the most Latin-spirited of the characters and so anchors that sense throughout the piece.

How would you describe director Luke Sheppard and choreographer Drew McOnie’s vision for this production?

Luke and Drew have such a clear vision and are working to honour and stay true to the Latin spirit of the piece, that integral undercurrent, while making a production that works in the unique space of Southwark Playhouse. They are making a world that combines the music and physicality of this culture, placing the idea of ‘community’ at the heart of it. They’re big on collaboration, and spent a lot of time bringing together a great cast, and they try to approach it so the entire company feel ownership over the piece. We are incredibly lucky to have them and I feel their vision will be the key success of the show.

This is the UK premiere of the show. Will British audiences get it? And who should come and see it?

They will absolutely get it! It’s a funny question and one that keeps popping up; will the British audience get it? Well we get the West Wing and House of Cards but don’t have the same government system. While it’s a slice of Latin American life in New York the themes are universal; it’s about community, it’s a love story and it tells the tale of three generations searching for their dream. Also, as this community faces the challenges of new development and their world around them changing, there are many parallels that can be drawn with London, particularly directly around Southwark Playhouse. I would urge everyone to come and see it. It’s one of those special shows you wouldn’t want to miss. I’d especially urge the young hip urban crowd who wouldn’t normally choose to see a musical but love music. The minute Sam Mackay, who is incredible, steps onto the stage and opens the show you know straight away you are in for something different, edgy and unique.

You were also part of the original UK Cast of Rock of Ages at the Garrick. Was that a good time?

Yes it certainly was! Again, an award-winning show that came over from Broadway and has had great success with British audiences. We were lucky enough to work on it with the original creative team which was really special. The show is about to head out on tour around the UK so catch it if you get a chance. It’s literally ‘a good time’.

You’ve described working on The Merry Wives of Windsor at Shakespeare’s Globe as the best thing you’ve done. What made it such a special job for you?

It was the whole experience working within such a special building and having the chance to immerse myself in Shakespeare for two years. The show was hilarious; I really grew as an actor and learnt so much. We are all still very close as a company and support each other in everything we do.

You had a brush with reality television when you competed on BBC’s The Voice. How was the experience and what did you take away from it?

Well it wasn’t really a brush as it was 9 months of my life in total all boiled down to a few weeks on screen. I wanted to push myself and give myself a challenge, which I definitely did as it’s a completely different skill to performing on stage. It was an honour to get to work with such esteemed company such as Will.i.am, Kylie Minogue, Tom Jones & Ricky Wilson, you really are learning from some of the best. I’m still processing it all now. I’ve taken away a great deal from it, some great friends including my mentor Ricky Wilson, who still keeps in touch and is supportive of all of our futures. I’ve again learnt a lot about myself, my voice and about what I can and can’t do. I’d do it again for the experience and musical knowledge gained any day.

Who knows!! Good things I hope. I’m working hard on my music and collaborating with a few other contestants on the show. Keeping busy and staying creative as that’s my passion!