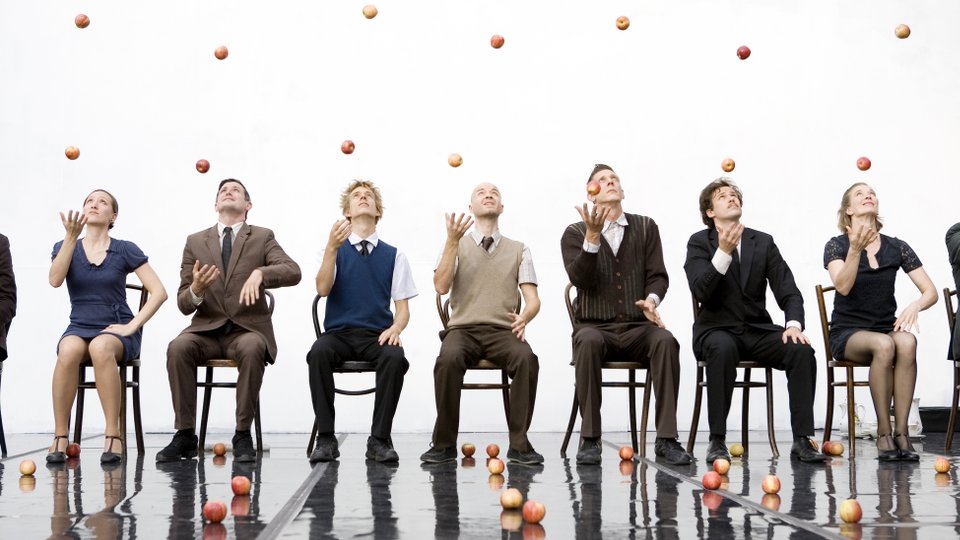 Who knew watching people juggling apples could be so much fun? The Gandini Juggling troupe, led by director and performer Sean Gandini, have landed at the Udderbelly Festival on London’s Southbank and play there for the next few weeks with their show Smashed. They cordially invite you to join their tea party – with a difference…

If you fancy something a little bit quirky, look no further than Smashed. Enormous credit must go to the organisers of Udderbelly for creating a real festival atmosphere on the banks of the Thames. A mini oasis of food, drink and picnic tables surrounds a circus tent in the shape of a supine purple cow. Don’t worry about England’s notoriously iffy weather – there’s plenty of shelter and a very warm atmosphere.

Entering the tent recalls visits to the circus, and this proves wholly appropriate with Smashed, which showcases the art of juggling with nine superbly talented performers. A few routines of synchronised juggling to the strains of 1930/40s popular songs lull you into a false sense of security. However, if you start to wonder if the thrill of watching apples tossed and caught may strain over an hour, fear not: Smashed has plenty of tricks up its sleeve.

Mixing the circus skill of juggling with theatre, Smashed presents a variety of routines in which the performers interact. Another major strength is that some of the sketches are very funny, with a few of the jugglers proving adept at comic timing. You’ll be dazzled and mesmerised by all the flying apples, but you’ll also find plenty to laugh at. The ensemble’s well-worked routines take full advantage of the performers’ disparate personalities, strengths, and even weaknesses.

Without giving too much away, Smashed veers into delicious anarchy, and we especially enjoyed the reprise of the first routine as the curtain call – a fair indication as to how far off the rails these well-dressed and seemingly genteel performers take the show within the space of only one hour. It’s fun joining them on this journey.

A word of warning: one of the acts in Smashed involves the rapid eating of apples. So quickly are they gobbled in fact that (not wholly unexpectedly…) one of the performers retched on stage during the show we saw. If that sort of thing makes you feel a little queasy, you may wish to judiciously look away as soon as the munching begins…

There’s plenty going on at the Udderbelly Festival, and it’s well worth your while checking out. With a talented ensemble who are almost as creatively inspired by apples as Isaac Newton: Smashed is entertaining to its core.