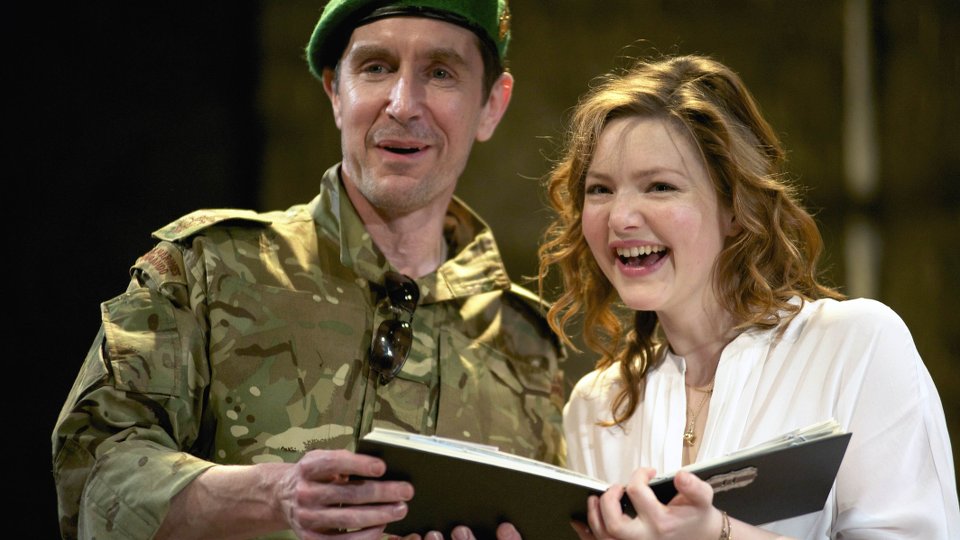 Anya Reiss’ new translation of Chekhov’s Three Sisters, currently running at Southwark Playhouse, attempts to modernise the play. It’s set in the present day in an unnamed overseas country where there is an occupying British garrison, and the women wish to return to London rather than Moscow. Oddly, Russian names and patronymics are retained.

This modernisation of the play raises many such difficulties, none of which are successfully overcome and which are too numerous to detail; though they all stem from the same issue that western societies have changed since 1901 when the play was first performed. Thus the actions (and inactions) of the various female characters in their relationships with men don’t ring true.

The power of Chekhov’s plays lies in the subtlety of his storytelling, where seismic shifts occur which are felt through aftershocks. His nuanced structure is ill-matched with Reiss’ blunt and sometimes misfiring dialogue. There is a preponderance of unnecessary foul language, and some characters are whittled down to one-dimensional soap opera archetypes. The single notes that Joe Sims is given to sing as Solyony is that he’s opinionated and tactless. Sims does what he can with the part, but he can’t disguise the lack of substance.

The modernisation too often comes at the expense of the storytelling: do we really need a karaoke version of Pulp’s Common People? The emphasis on the party scene is askew; to the extent that it barely registers that Natasha (Emily Dobbs) is slowly taking control of the household.

Out of the relatively unsympathetic sisters presented here, Olivia Hallinan as Olga emerges most creditably, commendably signposting the steady relinquishing of control over her family in ways not entirely clear from the script. Youngest sister Irina is virtually inaudible throughout thanks to Holliday Grainger’s poor diction – and it’s not even that big a theatre. Emily Dobbs fares rather better as Natasha, and brings some humour to the part. It’s a shame that Natasha’s transition from the ridiculed to the tyrant is largely lost in a messy production, rendering her climactic scene confusing rather than satisfying.

The male actors prove similarly hit-and-miss, though Tom Ross-Williams is enormously sympathetic as Kulygin, and the excellent Michael Garner creates a complex, sympathetic and unusually spiky Ivan. Fortunately for the production, the star pulling power doesn’t disappoint either. Paul McGann is one of a few leading actors who is always interesting, engaging and convincing: and so he proves as Vershinin. McGann, whose career has seen him all too rarely on stage, is always worth the ticket price to see. The shame is that his, and other excellent performances, comes in a below par production.

The problems inherent in the script could be partially disguised by firm direction, but Russell Bolam’s handle is weak. Some of the actors wander around seeming lost, and Bolam has to take a share of the blame for the lack of clarity in the storytelling.

Overall, Three Sisters is a disappointing revival of a classic modernised for no good reason, where a handful of superb performances retain interest despite the surrounding mediocrity. Chekhov’s already quiet voice is lost.