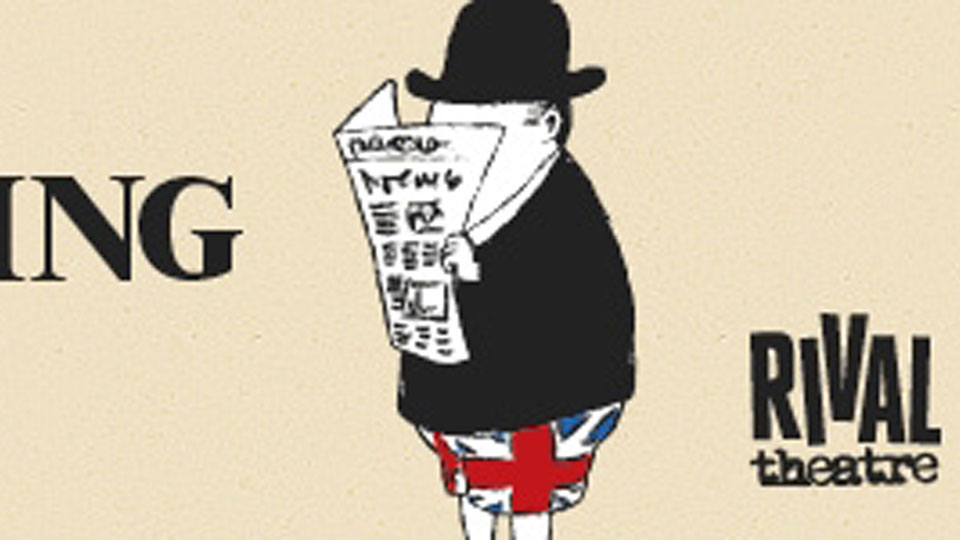 Two crooks have been hired by an unscrupulous journalist to rob an unnamed MP’s residence so that stealing his phone, hopefully containing enough evidence to provoke a scandal, will look like routine theft. The crooks, Alistair and Danny, break in on Christmas Eve, little realising that the MP is already there, secretly meeting a young woman half his age, Gloria, with whom he is having an affair. The house becomes even busier when the MP’s wife Beatrice shows up, as well as Mr Graver, his on-the-verge-of-a-nervous-breakdown public relations manager.

Within the framework of this neat set-up, a fully-fledged farce emerges, with all the classic elements of mistaken identity, secrets and lies, and an ever-tightening frantic plot. Oh, and it’s also very funny – which ticks perhaps the most important box. The first major production from Rival Theatre proves a good one, and The Upstanding Member is heartily recommended to lovers of farce and comic theatre.

The casting on the whole works well, with the actors supporting what is already a well-structured farce. It’s important they keep the energy high over the length of the run, but on the current showing it’s hard to envisage problems. Tim Dewberry and Izaak Cainer are terrific fun as the crooks (though ones with moral scruples it has to be said). The physical differences between the two – Dewberry is tall, sharp-suited and well-spoken; Cainer younger, shorter and dressed like a window cleaner, offer amusing contrasts. In the true nature of farce they assume the guise of men in the legal profession (I won’t say any more – you’ll have to see it to know why) and their playing of roles within a role is one of the highlights of the show.

As the MP and his wife (think Neil and Christine Hamilton – remember them? Once Tories well-respected by Daily Mail-reading types who these days have to settle for low-rent panel show appearances after Neil’s cash-for-questions scandal) are Stephen Omer, who is suitably oleaginous and insincere, and Carole Street, who maintains a supercilious dignity. Out of the cast it’s Street who seems least at ease with the frantic pace and the snappy exchanges of dialogue: she needs to trust herself in the part and attack it with more relish.

The other members of the cast impress too. Kate Craggs is a dignified Gloria, trying to make the best of her life, and Ed Sheridan is hilarious as the tightly-wound Mr Graver whose anxiety – enough to provoke a stroke – is another core ingredient of farce that’s well-expressed here. Alexander Pritchett introduces a touch of icy menace.

Even though it runs to only seventy-five minutes, The Upstanding Member is a touch too long (maybe five or ten minutes could be culled). The frantic pace is built and maintained in all but a few instances and a little more tightening would sort that out. For some parts an enormous suspension of disbelief is required – especially when Alistair shows off his flair for pick-pocketing (he’s certainly no Artful Dodger), but the characters are well-drawn enough for this to not become distracting.

On the whole, The Upstanding Member is thoroughly entertaining. It makes good use of the space, and it’s a well-lit production, simply but effectively lending the stage a warmth and homeliness. There’s also an excellent running gag (we like a good running gag) about the Window Cleaner’s Union. There aren’t enough good farces on the stage at the moment, and Rival Theatre’s The Upstanding Member is the right place to look for one.