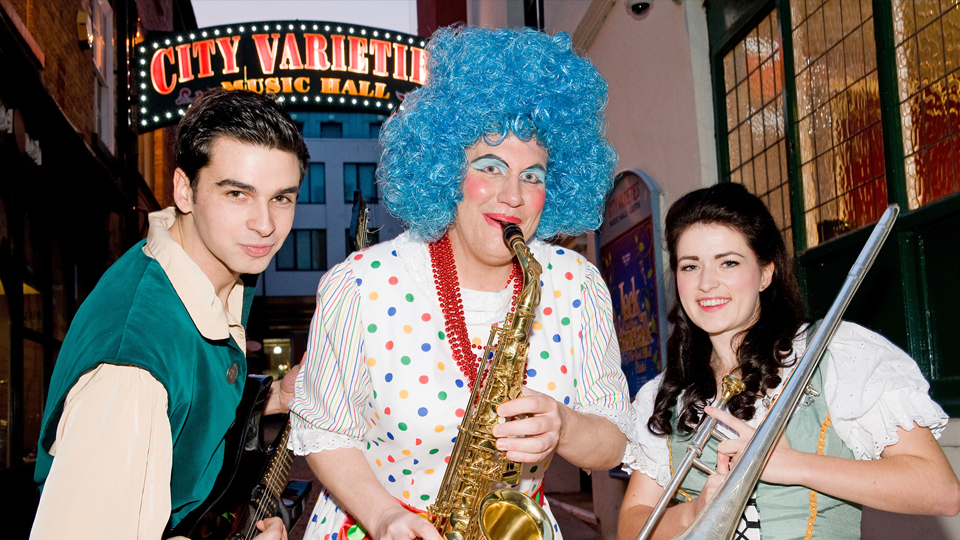 Jack and the Beanstalk

This month Jack and the Beanstalk – The Rock ‘n Roll Panto, kicks off the festive season in Leeds at City Varieties Music Hall. Boasting an array of projection effects, live action props and pyrotechnics, this small-scale musical promises to pack a big punch.

Families can expect an eclectic mix of musical numbers in the show, many of which are covers of contemporary hits. Songs such as Mercy and Lady Marmalade are delightfully tongue-in-cheek, whilst brass-funk versions of Sixties classics Hit The Road Jack and Always Something There To Remind Me will have toes of all ages tapping. The musicality of Jack and the Beanstalk is perhaps what makes it stand out amongst other pantomimes; whilst its staging is small scale – albeit cosy and endearing – its musical scope is vast. Lead performers constantly play instruments, comprising of a brass, drums, guitars and keyboard. The show has a full, rich sound which strikes to the core.

Doubling up as musicians as well as performers, Jack and the Beanstalk’s cast consists of a vibrant and engaging range of actors. Simon Nock’s Dame Dolly Durden is deliciously saucy, cutting an imposing figure on stage with an outrageous wardrobe of outfits. Brash, bold and bitchy, Nock’s pantomime dame is everything an audience would expect with lashings of broad slapstick and a liberal peppering of naughty gags to keep the adults laughing. Joe Vetch and Rachael Garnett play principles Jack and Jill with verve and youthful energy, captivating the younger audience, whilst Hollie Cassar’s Fairy Aubergine brings the obligatory campy magic to proceedings with a warm lightness of touch. In support, Kenny Davies brings a clown-like flair to Billy No Mates, whilst Robin Johnson revels in an utterly evil performance as Fleshcreep. A particular favourite performance is that of Squire Snuffbox, played with a wonderfully English stiffness by Peter Peverley. What is evident throughout the show is that all the performers are enjoying the process, which actively heightens the positive mood of the audience.

Even the greatest panto-cynic would be hard pushed not to enjoy Jack and the Beanstalk. The story is pacy and to the point, whilst the musical numbers kick in at a relentless rate with bravura performances. Camp, kitsh and at its heart wonderfully traditional, the show has a homespun quality which is a refreshing counter to the modernist approach of theatre presentation. It is worth considering that for many children, pantomime will be their first encounter with the theatre; the glittering performances of Dolly Durden, Fleshcreep and Fairy Aubergine will light flames of inspiration in young audiences as they grow into next generation of viewers and, perhaps, theatre professionals.

Jack and the Beanstalk succeeds in being wholesale entertainment for all the family. Characters are vividly portrayed with an energy which will enthuse even the grumpiest Scrooge in the family, with plenty of cheeky gags to entertain the elders. Colourfully camp with magical music, Jack and the Beanstalk will leave an indelible impression on its audience – young or old.