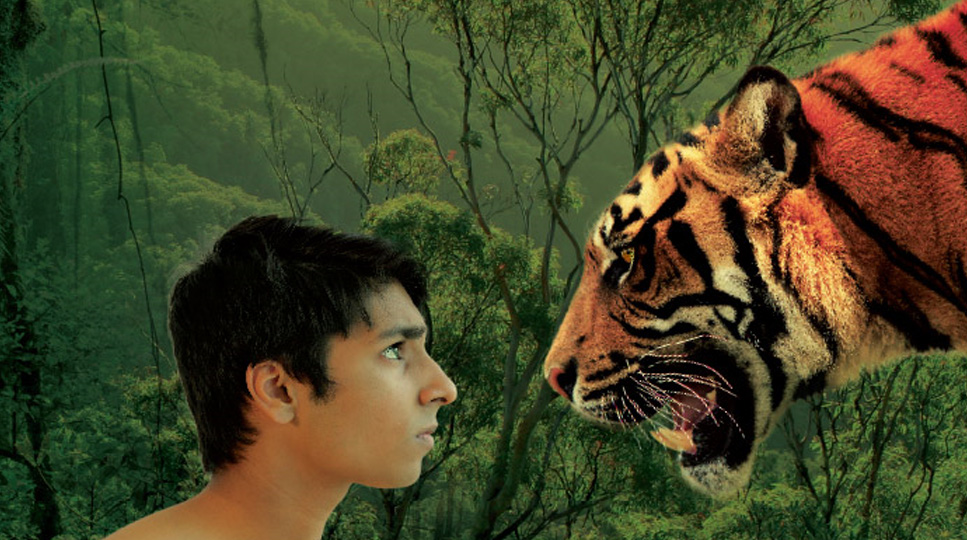 Transforming West Yorkshire Playhouse’s Quarry Theatre into the humid jungles of India, this Christmas sees a spectacular new adaption of The Jungle Book for the stage.

This dynamic and vibrant family show is directed by Liam Steel, a multi-award winning director and choreographer whose recent work includes the musical staging and choreography for Oscar-winning film Les Miserables. Combining acrobatic movement, beautiful puppetry, live singing and contemporary Asian music with rich storytelling, this mesmeric production brings Mowgli, his jungle friends and fearsome foes vividly to life. This witty and faithful retelling of Rudyard Kipling’s coming-of-age story is adapted by Rosanna Lowe whose writing credits include the BAFTA award-winning BBC series Horrible Histories. Laura Hopkins designs its striking costumes and set, with original music composed by Niraj Chag and puppetry and masks created by Rachel Canning. It’s performed by a cast of 12 including Shobna Gulati, known for her popular, long-running television roles in Coronation Street and Dinnerladies

Lost in the jungle as a baby, Mowgli is adopted by wolf Raksha and raised as her own. Taken under the protection of gracious panther Baghera and heavyweight bear Baloo, the Man-cub is taught the laws of the jungle, learning to evade the breathtaking squeeze of boa-constrictor Kaa and the lure of the money-loving dancing monkeys. As years pass, the jungle grows uneasy with his presence and when Mowgli encounters his own kind he must discover what it is to be Man, and to face the bloodthirsty roar of tiger Shere Khan.

In this article:The Jungle Book