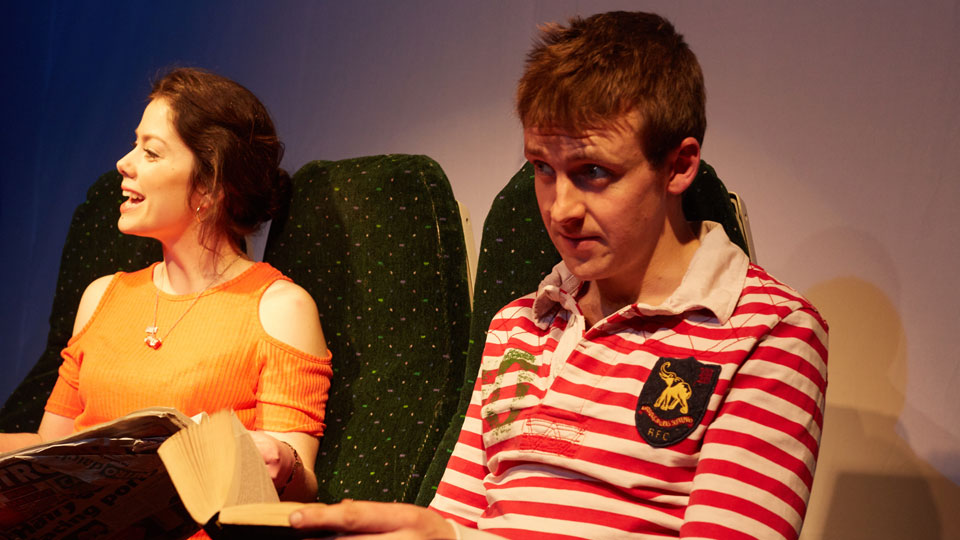 One of Those is an entertaining and very funny piece of new writing from Trapdoor Productions that is airing at the Tristan Bates Theatre this week. The wheeze is that two strangers meet on a train, and over a short space of time, a love-hate relationship blossoms between them. In the second act, we’re introduced to a further three travellers, all heading to Cornwall, and connections between the characters slowly emerge.

Tom Ward-Thomas’ script is bright and breezy, and the dialogue sizzles with plenty of witty one-liners. The first act introduces us to James (played by Ward-Thomas) and Laura (Amy Newton). At first they irritate each other, as Laura interrupts James’ solitude and reading, whilst James is reluctant to help Laura with her crossword. When the barriers break down and they open up to one another, they can’t help making snap judgements. “I’m not one of those people who…” is a constant defence, from which the title of the piece derives.

The first act, a two-hander between James and Laura, is for our money, the strongest half, and time spent with two often irritating characters (you wouldn’t want either of them in your carriage sitting next to you) is ultimately endearing. Amy Newton’s Laura is a stand-out performance, full of interesting grey areas and brave choices; though Ward-Thomas proves multi-talented, with solid characterisation as James, providing an excellent interpretation of his own words.

The second act introduces us to Philip (Sam Halpenny), an older man having an affair with sprightly young Davina (Emma Kelly). They are rudely interrupted by Philip’s wife Alice (Carole Street) and attempt excuses to disguise the true nature of their tryst. The most satisfying element of the second act is how Ward-Thomas, with great economy, shifts the relationships between all of the characters with a skilful ebb and flow. Director Amy Ewbank spots the farcical nature of the plot, keeps a commendable tight, fast pace and finds ways to maintain a natural feeling of movement against a static set. It’s also well-played, if a touch over-baked in parts (even for farce), though the situation has been covered many times before and it lacks something of the natural spark and intriguing characterisation of the first act. Side by side of an interval though, the two acts provide a coherent and neatly-themed show about human relationships.

There is a simple yet effective premise behind One of Those, and its lightness of touch and comic elements make for an enjoyable evening’s entertainment. If you like a character study with a strong sense of humour, you’ll likely be tickled by One of Those.