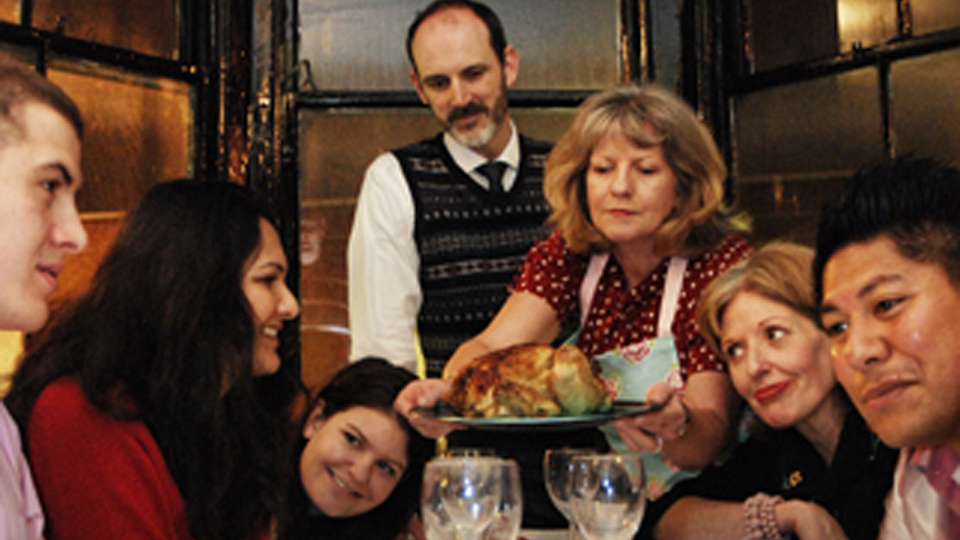 Two of Thornton Wilder’s one-act plays are currently revived at the King’s Head Theatre in Islington. Dating from 1931, the two shorts total only thirty minutes a piece, and are separated in this presentation by an interval.

The evening opens with The Happy Journey To Trenton And Camden, in which a family of two adults and two children take a car ride out to visit the eldest daughter who is now (as the mother informs everyone possible) married and living in an affluent suburb.

It’s great to see Stephanie Beattie back at the King’s Head after her emotive performance in Arnold Wesker’s Denial earlier in the year, and she’s terrific here too, playing the prim, proud and ultimately sanctimonious Ma. Wilder’s perceptive play, as so often with his work, ahead of its time, picks apart the older generation’s small-mindedness and parochialism by holding it up for scrutiny yet avoiding ridicule. Ma bullying her children into adopting her beliefs, whilst her placid husband Elmer (the wonderfully warm Simon Dobson) keeps the peace nicely encapsulates a small town American family dynamic.

The problem with The Happy Journey To Trenton And Camden is that, unlike the car they travel in, it doesn’t go anywhere and feels oddly disjointed, never coming together as a coherent drama. One act plays can be troublesome for finding an excuse to meander rather than to get to any discernable point, and so it proves here. When it ended, the couple in the row in front of me asked one another, “Is that it?”, and nobody wanted to be the first to clap for fear of being wrong, waiting instead for the cue from the rising house lights.

The fault is really with the writing, but the presentation of The Happy Journey To Trenton And Camden was rough around the edges too. Ben Z. Fuiava (excellent in The Long Christmas Dinner) reads small parts from the script from the side of the stage. There is a place for clever reveals of the mechanics of theatrical artifice, but the trick is to not make it appear unprepared, leaving the audience to wonder if a cast member is too ill to go on.

Things pick up considerably after the interval, as The Long Christmas Dinner is a neat, perfectly structured thirty minutes of drama. Wilder’s premise is to craft brief snapshots of the events around the dinner table of a family home on Christmas Day. There are references to babies who we’re told have just been born now reaching their teenage years, and characters leave the table only to be referred to mournfully in the past tense moments later. Once you latch on to the passage of time device, it’s delightful deciding who’s going to be the next to croak. As with the other piece, Wilder’s perspicacity of everyday mundane family life is successfully rendered into dialogue. The idea may sound slightly well-trodden and even a little mawkish now, but it’s worth remembering the piece is clocking on a century in age, yet still feels as fresh as a bright winter morning.

Whilst The Long Christmas Dinner is a much better piece of writing, and the performance is altogether slicker, it still has the feeling of a work in progress with the actors not always gauging successfully where the laughs would come. That said, all the performances are spot-on and nuanced, especially Ben Z. Fuiava’s neat slide from robust health to the frailty of old age within ten minutes.

The end result is a short evening of mixed fortunes, and the feeling that the show would have benefitted from a little tightening up in parts.