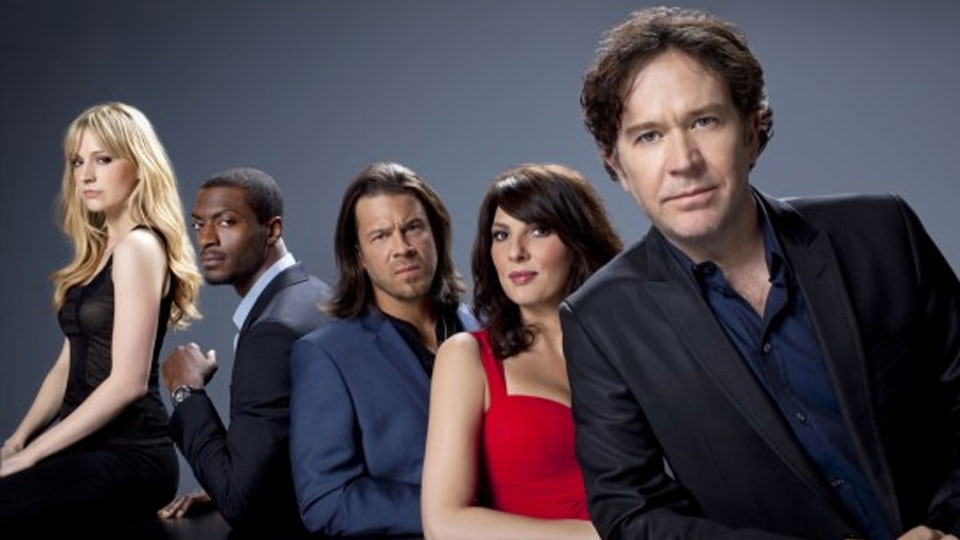 Former insurance agency investigator Nathan Ford (Timothy Hutton) is the leader of a team of skilled con-artists who use their skills to get revenge on those who use their power and wealth to victimise others. In his team are Sophie Devereaux (Gina Bellman), Alec Hardison (Aldis Hodge), Eliot Spencer (Christian Kane) and Parker (Beth Reisgraf) who are each skilled in different areas complementing each other perfectly.

Leverage: Complete Season 4 contains 18 episodes spread across 5 discs. The season opens with The Long Way Down which finds the team trying to locate a missing climber whose fate appears to be linked to a corrupt financier. With Leverage every episode is structured around a different investigation as the team use their various skills to find answers, right wrongs and unmask criminals. Season 4 features an over-riding arc involving mysterious business man Jack Latimer (Leon Rippy) who is keeping a close eye on the team and profiting from their cases.

Over the course of the season Nathan and his team go undercover at a murder mystery (The 10 Li’l Grifters Job), get caught up in the kidnapping of a child (The Carnival Job) and investigate a sinister psychology program at college (The Experimental Job). There’s also the small matter of Nathan and Sophie’s secret relationship which they are desperately trying to hide from the rest of the team.

Our favourite episode of the season comes on The Boys’ Night Out Job which sees season 1 character Hurley return as the team tries get him out of his involvement with drug gangs. The season comes to a close with a tense face-off involving the team and Latimer.

The cast of Leverage put in decent performances which is one of the reasons the show is watchable in a throwaway kind of way. Christian Kane (formerly of Angel) is one of the standouts as the rough-around-the-edges Eliot who is a martial arts and weapons expert. Timothy Hutton is another highlight as the leader of the team and the ‘brains’ behind all of their investigations.

Extras on the discs are limited to a behind-the-scenes featurette.

Leverage: Complete Season 4 isn’t the best TV show you’ll discover but there’s something about it that makes it highly watchable. The overall feeling is a little cheap and it’s very similar to UK shows such as Hustle and New Tricks. Leverage is the kind of show that you’ll stick on if it’s a quiet night on TV but we can’t imagine dying to tune in every week. It’s a fairly involving show, with a solid cast and some decent stories along the way.