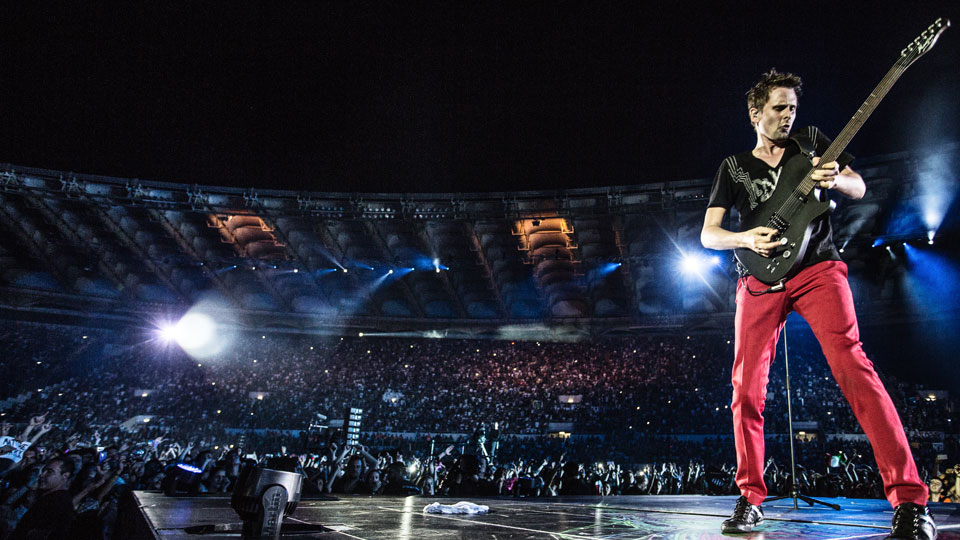 We were very excited to be invited down to London’s W Hotel, for the preview screening of Muse live at the Rome Olympic Stadium. For anyone who has witnessed Muse live, you know what all the fuss is about and as to why they are often given the tag of the ‘best live band’ and have won numerous awards for their live shows. They simply ooze class, they rock and they incorporate such sophisticated and visual effects into their live sets, that the whole experience is a joyous journey and their powerful and anthemic songs are second to none and ones that stadiums were built for.

For the fans who missed out on tickets to their last tour this summer, or for those of you who are curious about the band, or were there and simply wish to re-live the concert, there is no better showing of what they do best, that with this live recording. This concert shows off the band to their best of their ability, with their thumping songs from their last album The 2nd Law, along with their such classic hits such as Supermassive Black Hole and Plug In Baby, which are all showcased and brought to life with 4K technology, which makes the whole experience seem even more larger than life, than usual. Their show at Rome’s impressive Olympic Stadium, where they played in July 2013 can now be re-lived and watched over and over again, should you feel the need to watch them rock.

So we’ve all seen the great effects that 3D technology brings us, but have you witnessed the joy of 4K technology? This is the first time that a band have used 4K technology to film a live show and the effects are simply stunning. Due to the fact that the quality is so clear, you actually get a sense and feel as if you are there with the band and the crowd and the quality of the recording, both in sound and visually, is amazingly clear. The only downside to how amazing it looks to watch, is that you can’t exactly get up from your seats and sway along with the crowd, or jump up and down to the songs and sing them at the top of your lungs (you can if you like, but you might be asked to leave the theatre/cinema!).

There’s a special advance screening happening on November 5 for some lucky fans, before it will be released worldwide in theatres afterwards, which will be November 7th in the UK. You do not want to miss it!

Advertisement. Scroll to continue reading.
In this article:Muse