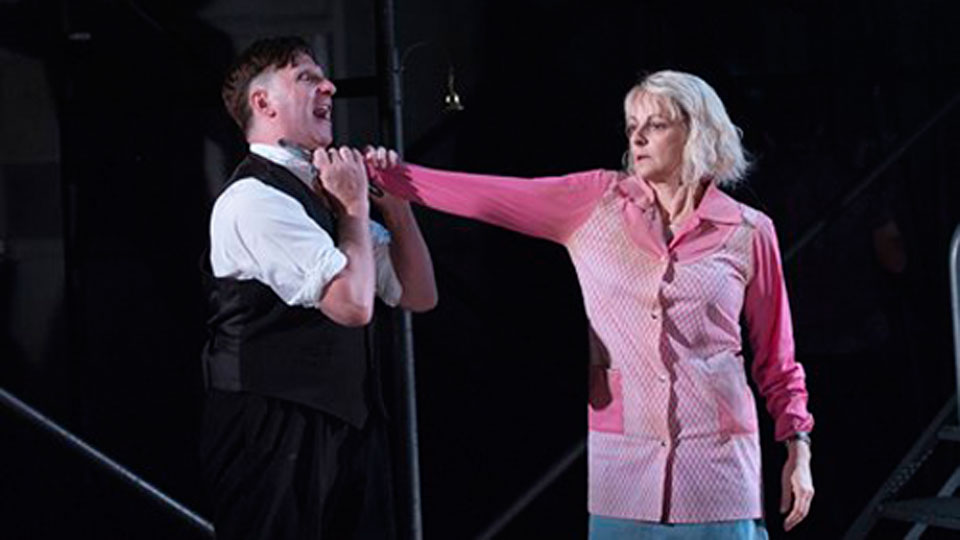 Stephen Sondheim’s Sweeney Todd – The Demon Barber of Fleet Street, opens a new season at the West Yorkshire Playhouse this month, before transferring to the Royal Exchange Theatre in Manchester. The musical also signifies James Brining’s directorial debut as Artistic Director of the Playhouse.

Derived from a Victorian pulp magazine story, Hugh Wheeler’s book follows the fictional tale of Sweeney Todd, the maligned barber who, recently released from prison, attempts to re-establish his business in a declining and destitute Fleet Street. Things seem to be going well until Todd’s mysterious past catches up with him, and his razor blade becomes the weapon of choice to erase his problems.

Brining has set his vision of Sweeney Todd in the dreary backwaters of late Seventies London. Crosscut between a greasy spoon on Fleet Street and a grimy barbershop above, the location evokes a recent era of decay, poverty and simmering anarchy; themes which universally translate across history and resonate throughout the story. Colin Richmond’s production design is ambitiously vast, utilizing all of the space in the Quarry Theatre to create an industrial meat packing warehouse to impressive effect. Exceptionally well lit, the setting is a hazy evocation of a depressing era with the yellowish colour palette of a faded Seventies photograph. Interiors are innovatively packaged within storage containers, providing a grimy claustrophobia within a weathered city. Instantly the location sets the scene and reboots the concept of Sweeney Todd beyond preconceived ideas of Victorian London, highlighting what the WYP does so very well; taking classical stories, such as last season’s Doctor Faustus, and re-imagining them in an uncanny setting. Sweeney Todd presents an established landscape of the recent past which is familiar, historical and politically prescient.

Gillian Bevan stars as café owner Mrs. Lovett, the harpy with a heart of gold who devises a pie-production line off the back of Sweeney Todd’s rage with a blade. Bevan captivates with a grotesque but endearing portrayal of Lovett who is sleazy, conniving and caring in equal measure. David Birrell adopts the bloodied apron of Todd and cuts a striking shape physically; a burning intensity in the eyes builds throughout, culminating in a truly demonic denouement. Bevan and Birrell share charged performances together and their scenes are some of the finest in the production. With genuine pathos as well as wonderful comic timing, their domestic moments translate perfectly to the late Seventies setting. Special note should also go to Sebastien Torkia for his hilarious turn as Pirelli, whilst Sevan Stephan is equally indelible in his robust and verbose performance as The Beadle. Starkly darker performances are provided by Don Gallagher as Judge Turpin, who is utterly unpleasant and constantly threatening; Barbara Drennan’s Beggar is equally creepy and tragically repugnant.

Despite a radical visual re-imagining, Sweeney Todd remains otherwise faithful to Sondheim’s score and fans will be sated by George Dyer’s solid musical direction. The arrangement effectively evokes the dark humour of the show whilst spotting action, particularly violence, with shocking alacrity. The relentless underscore and subversive technical complexity typifies the great demands made by Sondheim; Dyer’s direction is beyond exemplary and proves how scores of complexity can sound simple when directed to such a high standard. It could be argued that the style of singing is a little anachronistic, however, with an operatic-come-music hall quality that is at odds with the greasy spoon environment. Perhaps the inclusion of a synthesiser in the arrangement may have tied together the setting for a more coherent evocation of the Seventies, however the likely result would be a (wholly justified) outcry from Sondheim purists.

Innovative effects and big-budget stagecraft amount to a thoroughly enchanting production. Technical set pieces and gags are stylishly achieved, particularly the infamous barbershop chair and Pirelli’s transit van, complete with Pirelli tyres. It is a show bursting with detail and careful consideration, complimented by a modern directorial style, sombre lighting and an outstanding score. Sweeney Todd succeeds in showcasing music, drama and spectacle, ensuring that audiences will be constantly entertained for three rapidly absorbed hours.