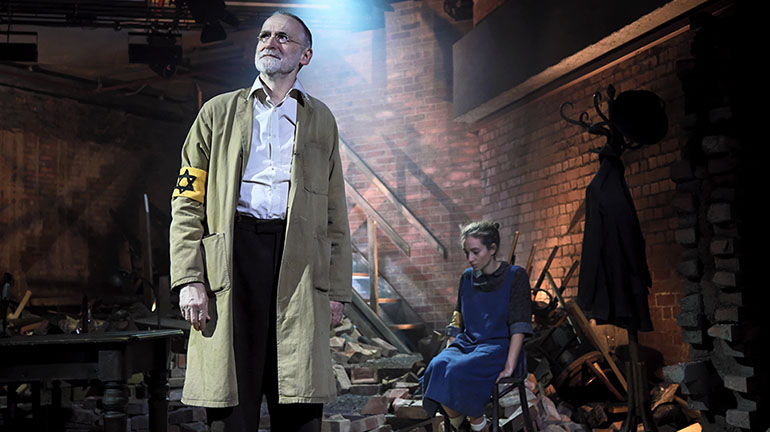 “This story happened. It did happen…”

We’re beneath the newly renovated Leeds Playhouse, peering through rubble and haze towards an old table, a chest of drawers, a shattered staircase. Forgotten toys and abandoned shoes are scattered amongst loose bricks and masonry, and it’s not clear where the fabric of the theatre’s foundations end and the set begins.

This is the 1942 Warsaw Jewish ghetto, vividly re-imagined for David Greig’s wartime tale of defiance and dignity against an unstoppable force. It’s a snapshot of life on the edge of the Shoah — the systematic genocide of over six million Jews.

We learn that the Polish-Jewish community has been shepherded into morale-crushing housing, with limited food, water, and sanitation. At his orphanage, noted paediatrician Dr Janusz Korczak fights to maintain an optimistic and dignified life for the children in his care.

But the Nazi circle is rapidly closing around them, with sinister rumours of mass murder in the countryside. When the orphans are ordered to transfer into camps in Treblinka, they follow Dr Korczak’s example, and unite in an act of solidarity which will go down in history…

Unpacking and exploring an atrocity as massive as the holocaust is a near-impossible task, which is why Dr Korczak’s Example examines some of the complexities by establishing focus on a small group of characters.

Rob Pickavance heads up the three-hander with a noble and stoic performance as Dr Korczak. He provides a naturally exhausted, yet defiant quality that captures the Doctor’s resistance to oppression with a steadfast morality — a belief in the willpower of choice — at a time when a virus of compliance and diffidence has taken hold of a nation.

Youthful angst, fury and rebellion comes in the shape of Danny Sykes as tearaway Adzio, played energetically against Gemma Barnett’s headstrong Stephanie. Their fateful romance brings an intimate realism to an inconceivable horror, with common themes of love and revenge translating directly to modern-day anxieties.

This is no doubt David Greig’s intention — to remind us that history is often about ordinary people thrust into extraordinary events, and younger audiences will undoubtedly see themselves in these ill-fated characters.

James Brining’s studied and well-paced direction tackles short scenes with beats of poignancy. Movements are delicately choreographed, underscored by a lilting and evocative acoustic arrangement. An effective ambient soundtrack of playground cries against gunfire also spots the atmosphere with a cinematic quality.

Visual flourishes abound, too. A broad scope is achieved through a company of posable figures positioned on set like quilted chess pieces. It’s a smart way of establishing additional characters, whilst introducing puppetry for a playful, childlike method of storytelling. Inevitably, the small, doll-like figures also draw comparisons in scale between the vulnerable individual and a controlling higher power.

The atmosphere is perfected by award-winning production design from Rose Revitt. Taking the moody Bramall Rock Void’s red brick walls as her inspiration, the set offers a depth that bleeds into the auditorium and pulls its audience into the past. It’s a remarkably evocative piece of work and showcases the potential of the new theatre space brilliantly.

At a swift, straight-through 80 minutes, Dr Korczak’s Example studies a massive atrocity in a miniature medium, exploring the hopes and principles of one man and the lost dreams of a generation. Both an education and a warning call to the future, this is a haunting piece of theatre that will ultimately leave you silent in reflection for some time.