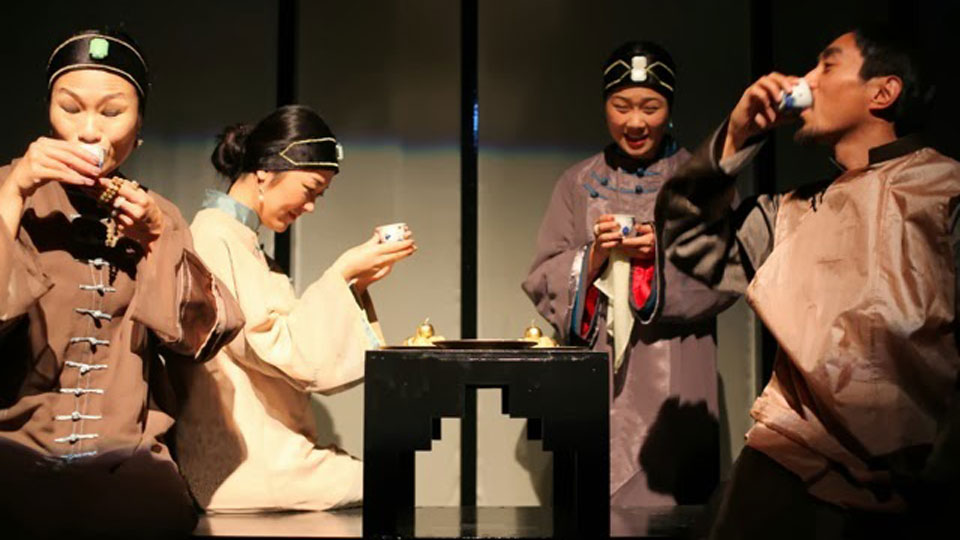 True Heart Theatre presents a nuanced tale of a clash of cultures in Twentieth Century China. This is the London premiere of Golden Child, written by award-winning playwright David Henry Hwang (M. Butterfly).

A young Scot of Chinese origin (Siu Hun Li) wants to find out about his cultural origins and visits his grandmother (Jacqueline Chan) to record conversations with her about the past. She’s more interested in converting him to Christianity, but the grandson persuades her to open up about her childhood. The action flashes back to 1918, when her father returns from abroad bringing back western ideas and a Christian missionary. But if he becomes Christian what will be the fate of his three wives?

David Henry Hwang’s play is full of inventive devices. Siu Hun Li plays both grandson and great grandfather Tieng Bin; whilst Jacqueline Chan plays Ahn as both an old woman talking to her grandson, and as a young child (her diminutive and slight stature make her perfect casting). In this way the themes of the play, how the past and the present influence one another, and the constant references to pleasing and living up to dead ancestors are brought to the fore and constantly reinforced.

Golden Child plays out with an enjoyable amount of humour too. Far from choosing sides, or treating traditional aspects of Chinese culture with reverence, Hwang is refreshingly irreverent towards religion; and the subtle backbiting between Tieng Bin’s wives raises quite a few laughs.

The further he delves into retelling the story of the past, the more Hwang forgets the framing device of his play. Avoiding spoilers, there is a moment later on touching on the supernatural that isn’t seen from Ahn’s point of view, which is a rare example of structural clumsiness in an otherwise tight play. That the scene is superbly played, bringing forth tears from Lourdes Faberes and Yuna Shin, whilst cleverly offset by a culmination of the damage wrought by the Reverend Baines, leaves it almost possible to overlook. The pace of Golden Child is a touch languid and unvaried, where a little tightening in parts would benefit the flow of the action.

Golden Child will resonate with anyone interested in Chinese culture, and the changes that have occurred in only one century. The story incorporates the issues of foot-binding, still prevalent only a few generations ago, as well as polygamy and the feudal system. Jacqueline Chan’s character Ahn has lived through the changes and is the audience’s point of contact in revisiting the past. The supercilious character of Baines, the Christian missionary (played by Sid Phoenix, seen recently as Cole Porter in Hutch) represents another feature that contemporary audiences will find as uncomfortable as foot-binding: the automatic assumption of cultural superiority.

The design of Golden Child is simple and effective, where the aesthetics are heightened by some beautiful projections onto the white fabric set. The performances are solid, though it’s Lourdes Faberes as ‘first wife’ Siu Yong who is especially impressive, comfortable with both the comic and tragic elements of her character.

Golden Child emerges as a skilfully-told story that engages the emotions as well as the brain. Everyone is interested by the past and the family that has shaped them. Hwang’s play does so with insight into Chinese culture, both traditional and modern.

You can catch Golden Child at the New Diorama Theatre just off Euston Road until Saturday 12th October.

Photos by and copyright to Anna Nguyen.