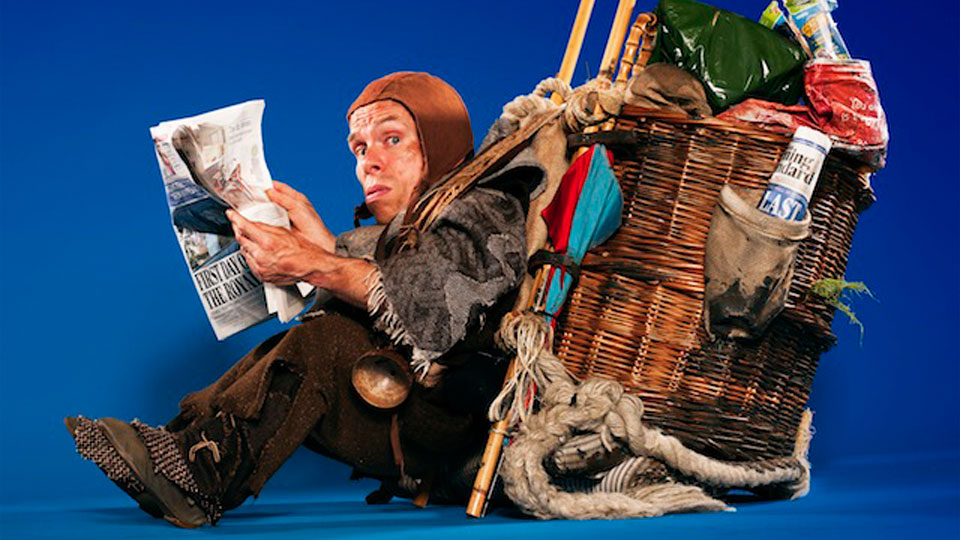 Monty Python’s Spamalot is a musical comedy “lovingly ripped off from” the 1975 film Monty Python and the Holy Grail. Like the film, it is a highly irreverent parody of the Arthurian Legend and the creator and brains behind the musical is Eric Idle. Spamalot is now celebrating its 11th year, since its launch onto Broadway in 2004. We have now seen the show through various cast line-ups and we have to say, that the current cast and the updated script is the best production of Spamalot that we’ve seen.

To give you a feel of what the show is about. The show starts with a historian giving a brief overview of medieval Britain, mainly pointing to parts of England and Wales that were in the midst and being swept up by a plague epidemic. A miscommunication results in a Scandinavian setting appearing, singing the very eccentric “Fisch Schlapping Song.” The men grab tiny fish and lightly slap the women in the face with them. After a couple of slaps, the women are having none of it and pull out much larger fish and slap the men in return with great force, making the men fall to the ground! After much slapping of the fish, the irritated historian returns and tells the frolicking Finns that he was actually talking about England. The shows eccentric, daft and excellent humour continues from here in and we just could not stop laughing throughout. The five knights gather in Camelot and in their midst, they are contacted by ‘God’, played by Michael Palin who makes an appearance in video form, who tells them to locate the Holy Grail and delivers an absolutely hilarious speech. They are urged on by the excellent Lady of the Lake, played by Bonnie Langford, who sings Find Your Grail, with much exaggerated and comic expression and the knights set off.

They travel throughout the land until they reach a castle, only to be taunted by lewd French soldiers, who act in a manner of childish ways, including tounge pulling and imagining themselves to be more brave and dangerous, than they actually are. There are many outstanding scenes in the production, where your sides will actually hurt from laughing so much. One of them is the Knights who say Ni scene. They continue and ultimately succeed in finding the Holy Grail and as with all feel-good shows, there is a lot of love and happy ending for a few of the lucky couples in the show. This is followed by a cast and crowd participating in singing ‘Always look on the bright side of life, da-dah, da-dah-da-dah-da-dah’, you cannot help but sing along and get caught up in the silliness of everything.

Warwick Davis with his clip-clopping of coconuts as he trots around on his imaginary horse (at least in terms of sound!) as Patsy was absolutely incredible and played the character with such warmth and humour. His facial expressions left us in stitches and he was the perfect accompaniment to Les Dennis’ rather dead-pan adaptation of King Arthur. Les Dennis is great in the role and delivers how you would expect, with many drop smiled faces and a slight serious tone and was often overcome with laughter as he tried to keep a straight face, which all added to the excitement of watching live theatre. Bonnie Langford as the Lady of the Lake was also outstanding, it’s no wonder that she has been around in the industry for so long. Her singing, acting and sheer energy captivated the audience and she hit every note with a look of ease and composure, as well as providing excellent comedy timing whilst doing so. The rest of the cast has been pitched excellently also, with everyone adding so much joy to the show and everyone put in 100% effort.

The current line-up of Spamalot has been greatly improved in the last few years and the jokes flying around this time come thick and fast. What works even better with this production of Spamalot is, that – particularly for the younger generation of theatre goers, who may not be over familiar with Monty Python and the in-jokes, is that you don’t have to be a pure Monty Python fan to enjoy the show, it helps, but it is not essential to get he humour. Previously, we felt that a lot of the in-jokes would have been enjoyed by solely Python fans and would have been a bit lost on others, but this is now not the case. We wholeheartedly recommend that you get yourselves down to the Playhouse Theatre to catch the current line-up. Warwick Davis and the cast are sure to make you come out of the theatre feeling good. If this show won’t make you smile, nothing will.