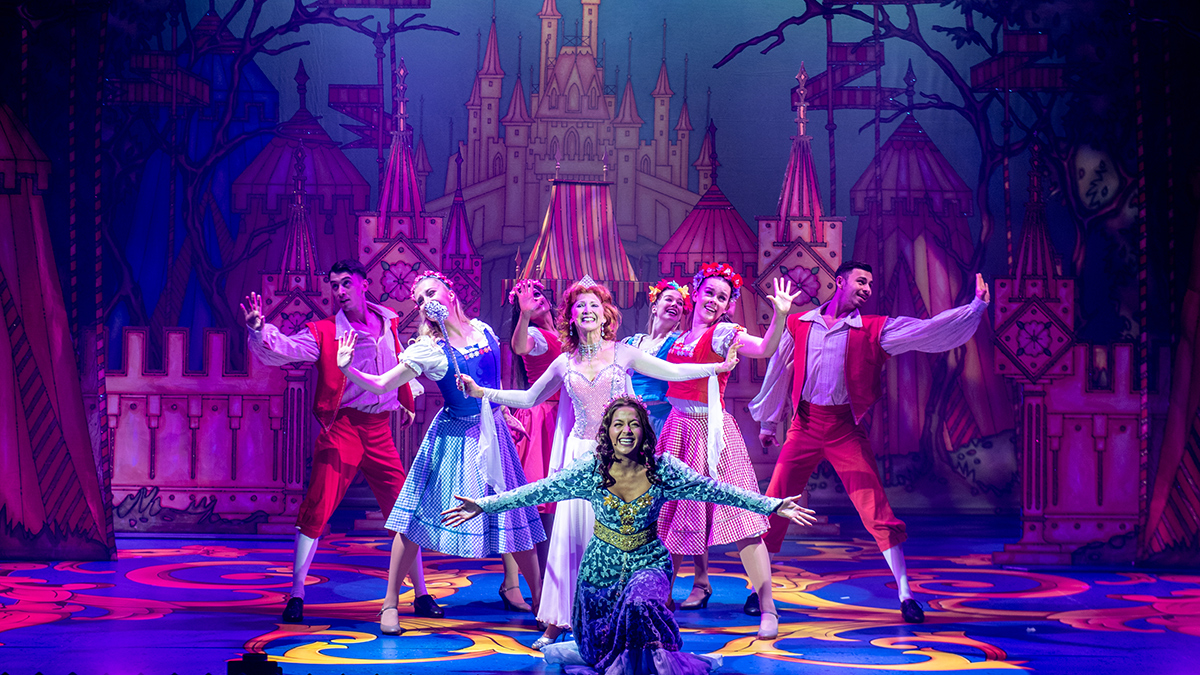 A festive treat is currently running at the Churchill Theatre in Bromley. With stars of stage and screen headlining the cast, funny jokes and songs aplenty, played out on a backdrop of colourful sets, ‘Sleeping Beauty’ is everything that you’d want from a traditional Christmas pantomime.

When Prince Harry of Holby (Lee Mead) arrives seeking the hand of his true love Princess Beauty (Claudillea Holloway) on her twenty-first birthday, it seems like a fairytale marriage is in the offing. The one snag is that the Wicked Fairy Carabosse (Myra DuBois) intervenes, and uses her magic to kill the princess. Thankfully, the Lilac Fairy (Bonnie Langford) is on hand to stave off the worst effects, holding Beauty in a permanent sleep until the spell can be lifted. The goodies must team up to defeat the Wicked Fairy, revive the princess and allow the royal wedding to take place.

Of course, the gist of the Fourteenth Century story, later popularised by the Brothers Grimm, is lodged deep within our national psyche. For that reason, the plot is pretty tenuous, and an excuse for a series of hilarious set-pieces. In true panto tradition, the morality tale plays second fiddle to madcap and up-to-the-minute jokes and songs. This is children’s annual invitation to let their hair down at the theatre, and there are enough bawdy double-entendres and outrageous performances in ‘Sleeping Beauty’ to keep the parents and the rest of the grown-ups thoroughly entertained too.

Pantos are always at their best if the actors are clearly enjoying it, and this production of ‘Sleeping Beauty’ boasts a fantastic cast who give the show their all. Lee Mead has the necessary charm for the dim-witted Prince Harry of Holby, and braves jokes at his own expense as he forever attempts to launch into a rendition of ‘Any Dream Will Do’, the song from ‘Joseph’ that made his name. He has great chemistry with Claudillea Holloway, who is suitably bright-eyed and sweet as the Princess. Joelle Moses is good fun as the feisty and flirty Queen Voluptua.

But the leads are never the funnest parts in a panto, and there’s no absence of flair in the supporting roles. The evergreen and effervescent Bonnie Langford perfectly encapsulates everything you’d want from a ‘fairy godmother’, though this one has a permanent cheeky glint in her eye and pulls off some serious dance moves. The only one with more pep in his step than Bonnie is Lloyd Hollett who plays Muddles, the court jester. Perhaps the most demanding part, Hollett is required to keep up the energy of the children in the audience and dictate the supersonic pace of events on the stage. He is more than equal to the task, and had the audience in the palm of his hand from his first appearance. Finally, taking the role of the ‘dame’ is Myra DuBois as the Wicked Fairy. She delivers the most cutting of put-downs and near-to-the-knuckle suggestive jokes with immaculate timing and killer precision. If Lloyd Hollett kept the youngsters laughing along, it’s Myra DuBois who had the adults splitting their sides.

It’s fair to say that we haven’t laughed so much since we saw the last panto, two years earlier (and we mean even beyond the world of theatre!) Pretty much every gag landed, and there were enough belly laughs that you’d only just recovered from the last one before the next one hit you. By the time a projectile crossed the stage and caused Carabosse a wardrobe malfunction in the wig department (sorry, Myra!) during a riotous rendition of ‘The Twelve Days of Christmas’, we were howling.

Everyone will have their favourite moments. We loved Muddles singing about his comedy influences and about what he wanted for dinner – both displaying a breathtaking capacity for linguistic acrobatics. Another daring scene saw him racing between the Lilac and Wicked Fairies, conveying tongue-twisters where the slightest slip would have resulted in language unsuitable for the core audience. The hilarity was in the tension the set-up creates, especially with DuBois’ poker face contrasting with Langford’s ever-increasing excitement. The two hours zips by with such relentless shenanigans to occupy you.

There is much else to commend about the production, including the colourful sets, lavish costumes and live musical accompaniment. ‘Sleeping Beauty’ is a slick production that really gets the true spirit of pantomime. The actors fed off the energy in the audience and kept it high throughout. If you want good, wholesome family fun this Christmas that provides all ages with plenty to laugh about, then you don’t want to miss this ‘Sleeping Beauty’.