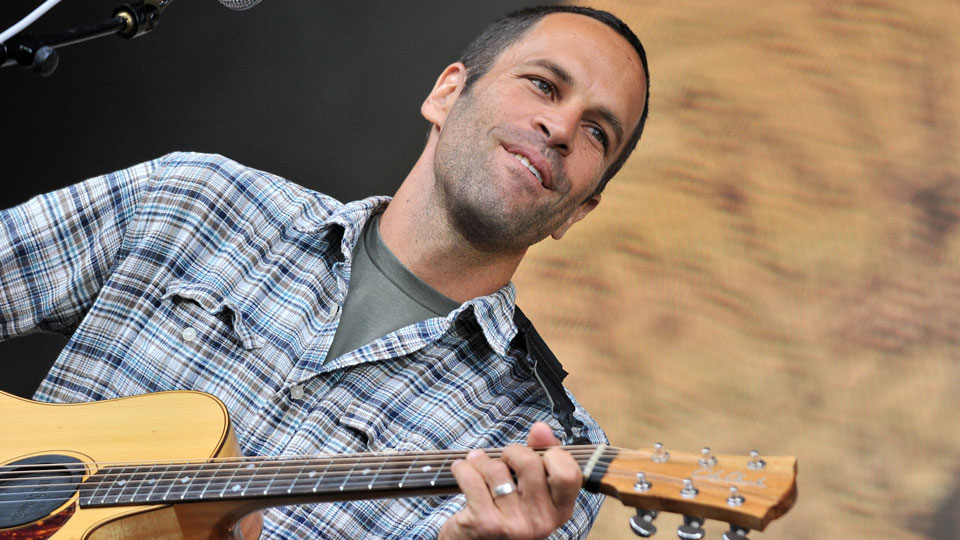 Jack Johnson performed at BBC Radio 2 Live in Hyde Park at the weekend and braved the miserable weather to bring us some sun-drenched songs.

His new album From Here To Now To You is released on Monday and Jack previewed it during his set. The album is the follow-up to 2010 album To The Sea and features the singles I Got You and Radiate.

We caught up with Jack after his set to have a quick chat about the lack of sunshine, what to expect from his new record and find out more about his touring experience.

You’ve just performed at BBC Radio 2 Live in Hyde Park but you didn’t bring the sun with you Jack. What happened?

Yeah I know! What happened? I’m losing my magical powers! I don’t know.

We always link your music to sunshine so performing in the miserable British weather must be rare for you?

I know. I was optimistic and I wore my sandals and everything.

Well at least you tried…

Your new album From Here To Now To You is out next week. What can we expect from it?

Wow it’s a week now, so close! It’s exciting. We’ve been on tour for the last week so time’s been flying. It seemed like it was 2 months away for a while. The album…I think I like it. It’s hard to tell. You listen to it sometimes and want to change everything. I listened to it for the first time on the plane ride over here because I was trying to remember some of the lyrics. When we’ve finished it and I listen to it I only hear the things I want to change. I put it away for a while. Sometimes I hear it and I think it’s pretty cool.

I like the songs. It’s sort of a snapshot of what’s going on in my mind for the previous year. This one has a lot to do with relationships in the family – father/son, father/daughter, husband/wife.

How do you find UK audiences? We have a reputation for being quite reserved…

I like playing some of the songs that focus on the lyrical content. If you play in Rio or Sao Paolo the crowd just goes so nuts and they clap on every song and sing-a-long almost louder than you. You can go on autopilot and it’s just a big party. The first time I play a place I get a bit thrown off because I don’t know what to expect. Now I’ve played so many places I look forward to the energy of the crowd.

When I play here I do like to focus on songs that are maybe quieter and appreciate the lyrical process that was involved in writing them. I find that people really respond to those a lot. It can be a party here too. Hyde Park last time we played here was a memorable show for us and definitely had a pretty good energy. Sometimes when we play around Europe, in places where English is a second language to them, I’m surprised how well people understand my words. It’s nice when we come here because you know everyone in the audience is hearing every word and can focus on the lyrics.

Does being on tour inspire you to write?

I find that when I’m touring and doing that kind of stuff that I have a hard time writing things. I’m taking a lot in and I’ll write about the experiences later. For me the writing process is usually a conversation with one person. Sometimes it starts with my wife, those are usually the love songs, and other times it’s maybe a conversation about what was happening on tour. I always try to think about one person when I write each song. The love songs are for my wife and the breakup songs are for my friends. I haven’t had to go through a break-up really as I’ve been with the same girl for 20 years. I have some songs that go through the eyes of my friends who’ve had a breakup or divorce. A lot of songs are through the eyes of my kids. On this new album there’s one song inspired by each of my kids.

What’s your favourite place to tour?

England of course (laughs). I like getting to new places. Even though I love surfing I like being somewhere for a few weeks that’s totally different. England is actually a lot of fun for us to come and play in. My oldest kid is reading Harry Potter right now so the idea of being in London is really fun for him.

All of the proceeds from your touring go to charity. Tell us about that.

From all the touring we’ve done since 2008 100% of our proceeds go to charity. To be honest it helps motivate me to go out on tour again. We’ve met all these different non-profit groups around the world and a lot of people are just good friends now. When they come to Hawaii they stay with us and a lot of these organisations we really believe in. To know that by going out on tour we help keep funding these groups and we believe in the work they’re doing, it makes touring more worthwhile for me. It’s an easier way for me to explain to my kids what Daddy’s career is.

Jack Johnson’s new single Radiate and new album From Here To Now To You are released on Monday 16th September 2013.