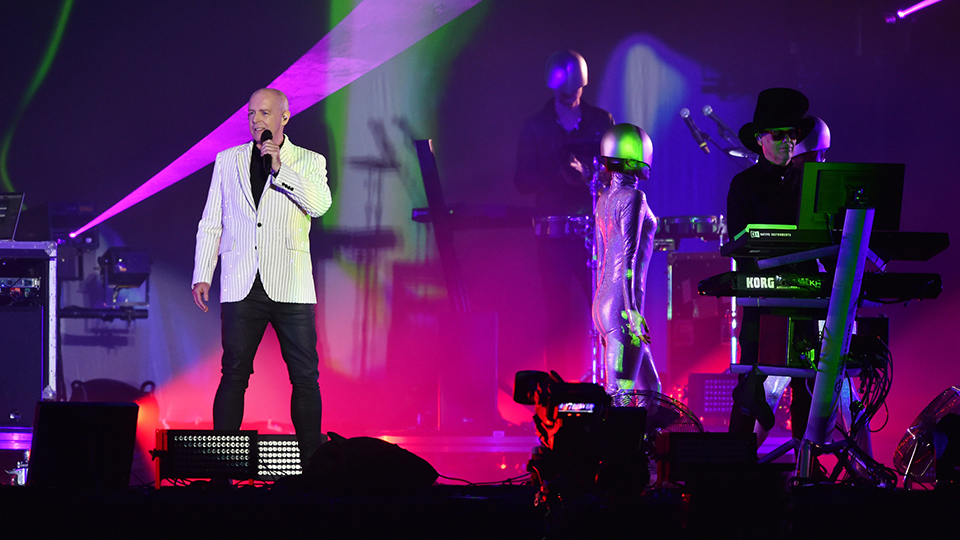 BBC Radio 2 has always been a champion of live music across all genres. One of its flagship events for this has become the annual Live In Hyde Park event, taking place in central London and showing the sheer variety of artists supported by the station, from all eras and musical genres.

Now in its seventh year, the ‘festival in a day’ saw a crowd of thousands descend on Hyde Park yesterday for eight hours of great music. Luckily the weather was kind to festival-goers, with glorious sunshine throughout and a spectacular sunset during Westlife’s performance (more on them later).

Simply Red were first up, and they definitely got the crowd going with their soulful, funky sound. As well as classics like Stars, Fairground, Something Got Me Started, Holding Back The Years, they also played tracks from their recent album Blue Eyed Soul including Thinking Of You. They were followed by Kelsea Ballerini, who performed songs from both her albums including the sassy Miss Me More and fun, playful Yeah Boy as well as emotional new single homecoming queen? which showed off her powerful vocals. Although she may have been unknown to many audience members, from the chatter after her performance it seemed her blend of pop-country had definitely won over plenty of new fans.

Unfortunately Emeli Sande was unable to perform, so Craig Charles stepped in to perform an extended DJ set before Bananarama took to the stage. Keren and Sarah performed hits from across their career – including classics like Cruel Summer, Love In The First Degree, Robert De Niro’s Waiting and Venus – as well as Stuff Like That, from their recently released 11th album In Stereo. They brought plenty of fun and entertainment to Hyde Park and encouraged the crowd to join in throughout.

For me one of the biggest surprises of the day were Clean Bandit. Vocalists Yasmin Green and Kirsten Joy both delivered absolutely stunning performances, and could be seen alongside band member Grace Chatto (who busted out her keytar at one point) and violinist Stephanie Benedetti swaggering about the stage and bringing plenty of sass and fun. They showered the crowd in colourful confetti during Solo and Rockabye, whilst hits like Symphony, Solo and Rather Be got the audience clapping and swaying along to their blend of classical, pop and electronica.

Status Quo, meanwhile, delivered exactly what was expected – rocky guitars, rattling drum solos, great musicianship and a really fun, entertaining performance. Band member Francis Rossi strutted around on stage with bags of energy and showed off surprisingly powerful vocals on songs like Liberty Lane (from their new album Backbone) and In The Army Now, as well as some seriously impressive licks on his trademark green guitar. They also provided plenty of singalong moments with Roll Over Lay Down, Caroline, What You’re Proposing and Something ‘Bout You Baby I Like, as well as classics like Down Down, Whatever You Want and Rockin’ All Over The World.

One of the most anticipated acts of the day were Westlife, performing as part of their 20th anniversary year. They opened their half-hour set with the surprisingly poppy Hello My Love, from their upcoming album Spectrum, before firing rainbow confetti over the crowd. Vocally they sounded great, particularly Mark with his almost operatic performance on You Raise Me Up, where they encouraged the crowd to turn on their phone lights and sway along to create a truly magical moment. That said, all the hits were out in force too, with the audience singing along to every word of Swear It Again, Uptown Girl, What About Now and Flying Without Wings. They closed their set with a funky, laid-back take on World Of Our Own, which featured some great rocky touches and even a dance routine!

Closing the day were the Pet Shop Boys, playing their only UK show of the year. Right from the off it was a visual extravaganza, with colourful lighting effects, multiple costume changes and dancers dressed in everything from sleek silver spacesuits to animal skulls and brightly coloured morph suits. Neil and Chris promised us ‘new versions of old songs’, and they performed plenty of classics like It’s A Sin, West End Girls, Suburbia, Heart, Left To My Own Devices and Go West. They were also joined by special guests including Beverley Knight and Years & Years’ Olly Alexander, who joined them on new single Dreamland. For their final song, they performed Always On My Mind, which had the whole crowd singing and dancing along and was the perfect note to end the festival on.

Overall BBC Radio 2 Live In Hyde Park delivered yet another day of fantastic music, with something on offer for everyone across a variety of genres, styles and artists. I left on a complete high after some seriously impressive performances and already looking forward to seeing who’ll be on the line-up next year. Bring on 2020 already!