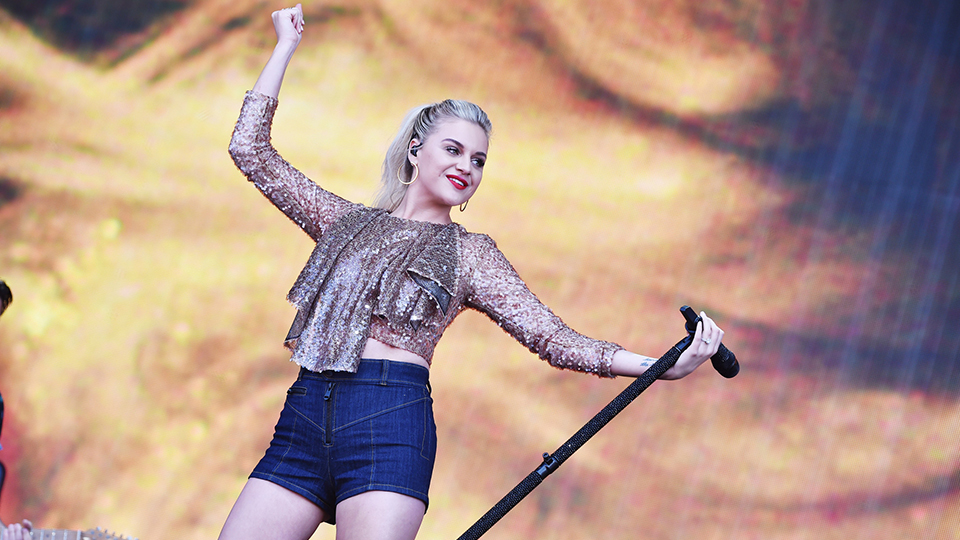 Kelsea Ballerini has become one of the most popular new country artists since releasing her debut album, The First Time, back in 2015. Since then she’s had five chart-topping singles – most recently Miss Me More earlier this year – and been inducted into the legendary Grand Ole Opry. She’s also been a regular visitor to the UK, supporting Lady Antebellum and appearing at C2C in 2018. Now she’s back with her new single, homecoming queen?, and yesterday performed as part of BBC Radio 2 Live In Hyde Park.

After an introduction from the legendary Bob Harris, Ballerini arrived on stage accompanied by her four-piece band. She kicked off her half-hour set with the empowering Miss Me More, adding an atmospheric guitar-led intro and heavy drums to give the song a rockier edge. Her vocals sounded great, with plenty of soul and depth, and she brought tons of swagger to her performance. moving around on stage throughout and looking like she was having a great time.

Whilst it would have been easy for her to stick to the hits, Ballerini also chose to take some risks with her performance. The sparse Get Over Yourself, from her second album Unapologetically, might feel like an unusual choice for a show where many of the audience might not know her as well, but it actually served as a brilliant showcase for Ballerini’s smooth, powerful vocals and highlighted her strong stage presence. She also performed Better Luck Next Time, from her recent episode of NBC’s Songland, a twangy, number with a funky vibe and dreamy, lighthearted vocals that balanced out the kiss-off lyrics.

That said, there were plenty of fan favourites on offer too. Yeah Boy saw Ballerini pick up her acoustic guitar and show off her sweeter, playful side, whilst she put a rockier spin on Peter Pan with some impressive vocal runs and jammed out with her band. New single homecoming queen?, meanwhile, had a folky, melodic feel to it and Ballerini poured tons of emotion into the song’s delivery. You could really feel her performance was coming from the heart and it showed off a different side to her.

Ballerini closed her set with a rendition of This Feeling, which she recorded with The Chainsmokers. She encouraged the crowd to sing and dance along and her vocals had a rich, full sound that worked well with the song’s poppy vibe. I also really loved her harmonies with her band on the track and there was a lovely, joyous energy about her too.

Overall Kelsea Ballerini delivered a great set that showed off the different sides of her music as well as her impressive vocals and skill as a performer. I think it’s safe to say she left the country fans in the audience very happy, and from the chatter around me after her performance she’d won over plenty of new fans too. With a new album on the way early next year, here’s hoping it’s not long before she’s back in the UK again…

In this article:BBC Radio 2 Live in Hyde Park, Kelsea Ballerini