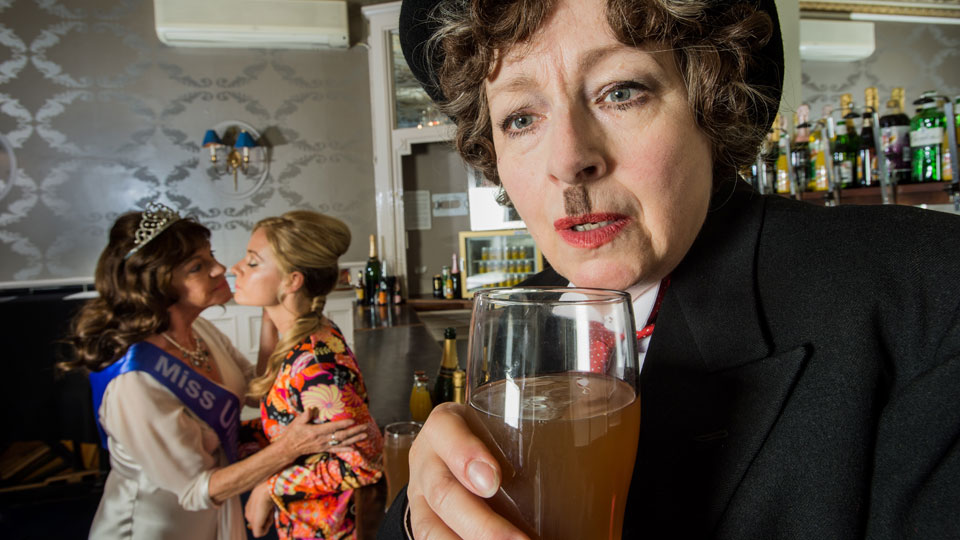 An older woman, Queenie (Polly Hemingway) stumbles into legendary and long-since closed lesbian haunt The Gateways Club (made famous in the movie The Killing of Sister George), which is deserted save for Ollie (Amanda Boxer), asleep at the bar and dressed as Charlie Chaplin.

The only rational explanation seems to be that Queenie has died and gone to heaven. Well, she had been ill… But then again why would a conservative Catholic who shunned her gay daughter spend eternity in celestial lesbian paradise? The arrival of young woman Shirley (Mia Mackie) the secret love of Queenie’s life, suggests they’re more likely to be in purgatory. Over an evening of excessive drinking and self-discovery, the three women are forced to confront their pasts in order to make peace with each other, and more importantly, with themselves.

The Speed Twins is a new play by Maureen Chadwick (Bad Girls, Footballers’ Wives) and you can catch it at Studio 3 of the Riverside Studios throughout September.

The premise is a brilliant one, and it neatly poises a drama that intelligently ekes out an examination of human love and friendship that is always entertaining and always truthful. The biggest selling point of The Speed Twins is that it’s killingly funny – I haven’t laughed this much in the theatre for ages. Its humour is couched in beautifully observed characters, and you may well end up misty-eyed by the conclusion of this often bittersweet play.

Maureen Chadwick’s fantastically witty script is brought vividly to life by the three actors involved. You will be challenged to find better performances than Polly Hemingway’s and Amanda Boxer’s on any stage in London: they are breathtakingly good, completely immersed in their characters and so much fun to watch together they should have their own series (has this occurred to Maureen Chadwick?)

Boxer’s Ollie has most of the funniest lines, and her comic timing is tuned to perfection. Whilst her bluff, old school ‘dyke’ is in often caricature – it’s self imposed and all ‘performance’: so when Boxer reveals cracks of vulnerability you care deeply for Ollie. Hemingway’s Queenie undergoes the biggest transformations (it will spoil surprises to elucidate) covering everything from ranting and raving like a Daily Mail columnist to disco dancing, and is clearly relishing the part. Mia Mackie is no less impressive as Shirley, and her youthfulness adds a different perspective. It’s a less showy part, and she commendably offers solid support and, in heated moments, a voice of sanity.

The Speed Twins has been realised with great skill. The sound design (Ed Lewis) is especially effective, covering everything from divine rumblings to 60s music, and it adds greatly to the atmosphere. Andrew D Edwards’ design is also good: it’s adaptive and cleverly simple, with an air duct fulfilling a range of functions. Director Simon Evans has brought together a pacey, slick and emotionally engaging show.

The Speed Twins, whilst a lesbian-themed play, deserves to gain universal appeal since it’s ultimately about love and friendship: qualities that everybody needs, aspires to and enjoys. This wonderfully humane show boasts one of the sharpest scripts and best performances currently on stage.

There’s also a great running gag about Princess Margaret and a reference to Beryl Reid. What’s not to love?