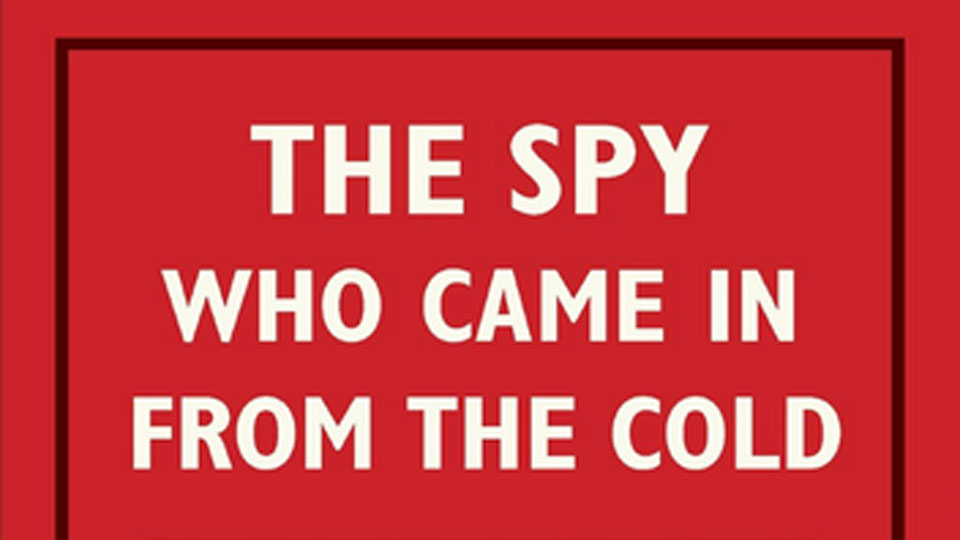 To celebrate the fiftieth anniversary of the publication of John le Carré’s classic Cold War thriller The Spy Who Came in from the Cold, Penguin are republishing it under the ‘Penguin Modern Classics’ banner. It is available in hardcover and dust jacket with a design evocative of the original Victor Gollancz first edition of 1963 (though oddly the quote, from JB Priestley, isn’t attributed on the new edition).

Only his third novel, coming long before Tinker, Tailor, Soldier, Spy and The Russia House, The Spy Who Came in from the Cold is the book that established le Carré’s reputation as a great writer of political and espionage thrillers. The novel was an instant hit, with a big screen adaptation starring Richard Burton produced almost immediately.

Le Carré’s first major success follows on from events established in his debut novel, Call for the Dead, and although it’s useful to be aware of the earlier story, it’s not essential. Le Carré, himself a former employee, takes us into the world of the British Secret Intelligence Service, run by the enigmatic Control. There double agents, defections from East to West and vice-versa and political assassinations are everyday occurrences.

The story follows the adventures of agent Alec Leamas, and an intricate plot that sees his apparent defection to East Germany in order to bring down an enemy agent. He’s tired and world-weary, and a bit like an anti-James Bond. Whereas Bond would probably spend his downtime skiing and womanising, Leamas takes on a dreary job at a library, where he meets a naive young woman called Liz, who apparently has Communist sympathies. With deception a key part of ensuring the mission’s success as he heads to the other side of the Iron Curtain, the last thing Leamas can afford is the complication of romantic feelings…

Le Carré’s story is intricately structured and finely nuanced. It rewards, and indeed requires, a close read; though if the story grabs you it’ll likely hold you right through to the last paragraph. There are twists and turns every step of the way, and if you’re coming to the story for the first time, your jaw will likely be hanging open by the final page.

The Spy Who Came in from the Cold has regularly been voted one of the most important British novels of all time. Why should an espionage thriller rank so highly? Apart from the brilliant structure, what marks the book out as exceptional is the moral landscape that le Carré creates. This is not a straightforward good versus bad morality tale. If anything, it’s amoral at best, and frequently immoral, with dirty tricks on both sides. Fiedler, the deputy of the East German Secret Service (the Abteilung) is easily the most sympathetic of the characters in the book, though his superior Mundt, a former Nazi who retains a fevered anti-Semitism, is truly loathsome. Justice, truth and loyalty are rare commodities in Leamas’ murky world. The Spy Who Came in from the Cold is a dark, uncompromising book that holds up the politics of the 1960s for scrutiny; finding no easy answers.

Le Carré’s prose can be a touch dry, and his dialogue isn’t always as characterised as it could be. There are moments of wordiness, such as during a trial scene which doesn’t really spring to life until the final revelation. However, at only 208 pages, it would be unfair to say that the book outstays its welcome. The story rattles along at a good pace, even if le Carré’s descriptions occasionally don’t. It’s also a very male book, with Liz the only female character of any consequence, and even she is underwritten and a victim of events.

Minor quibbles about literary style don’t stand in the way of this book retaining its power to shock and enthral, some quarter of a century after the end of the Cold War. As an evocation of the paranoia and preoccupations of the era, it’s streets ahead of the competition.

This celebratory edition contains an appendix of material from the archives. These include a copy of a supplementary sheet from the first edition; contemporary news cuttings from stories that inspired the book; critical reception; jacket covers that the book has been published under over the years and excerpts from the screenplay including a photograph of Richard Burton in character as Alec Leamas. There’s also a thought-provoking afterword by John le Carré in which he talks frankly about the books inception, reputation and his reasons for writing it.

Penguin Modern Classics are also re-releasing a number of John le Carré’s other works in paperback, with brand new and evocative designs.

In this article:crime thriller, espionage, John le Carre, Penguin Classics, The Spy Who Came In From the Cold