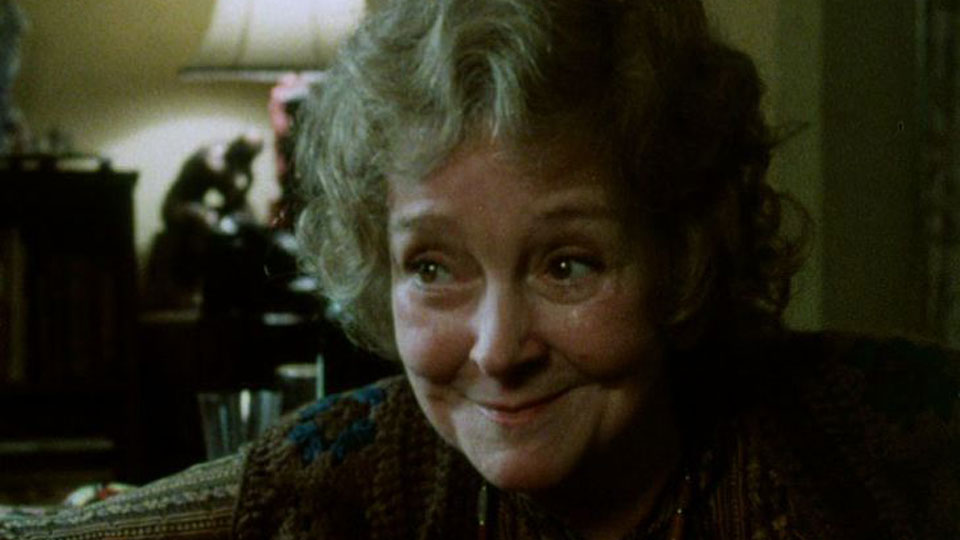 This week has marked twenty years since Bery Reid died, aged 77, from pneumonia. At the time of her death, she had been a regular fixture on British stage and screen for over forty years. Her credits included everything from big British films to guest appearances on panel shows such as Blankety Blank. Her ‘dotty aunt’ persona won her fans of every age, and she reached and retained national treasure status.

Those in their 30s may remember Beryl Reid for her performance as Adrian Mole’s grandmother in the TV series of the late 1980s. Horror fans will know her for Robert Fuest’s 1972 cult classic Dr Phibes Rises Again! and for Don Sharp’s Psychomania, which she starred in the following year. At the beginning of her career, she started strongly with 1954’s The Belles of St Trinian’s, playing one of the members of staff opposite the legendary Alastair Sim. The end of her career was no less distinguished when she starred opposite James Bolam in The Beiderbecke Tapes.

Beryl Reid died twenty years ago this week, on 13th October 1996. We look back at six of her most memorable performances. With so many to choose from, this list is by no means definitive!

Writer Eric Saward created the part of a ruthless captain of a space ship and, inspired by Sigourney Weaver’s success in Alien, wrote it for a woman. Beryl Reid wasn’t entirely appropriate casting, but she’s a lot of fun in a fairly dry story as she battles against Cybermen with Peter Davison’s Doctor.

Reid starred opposite founding Monty Python’s Flying Circus member Graham Chapman in his big-screen outing. Sadly, the film wasn’t as funny as might have been hoped, but Reid’s turn as the insatiably randy Lady Lambourn is certainly the highlight. Reid carved out a niche playing older nymphomaniacs, and she was an obvious choice for this part.

Reid was perfectly cast in a quintessentially English film about sex, or in this instance, about the embarrassing attempts to avoid it, when poor Ronnie Corbett accidentally comes into receipt of pornography. The film teamed up Reid with arguably the greatest male comedy character actor of the time – Dad’s Army’s Arthur Lowe. Seeing them together is a joy.

Eschewing her usual bubbly humour, Reid played Connie Sachs in the screen adaptations of John le Carre’s espionage classics. Whilst on the small screen, the productions saw Reid flexing her acting muscles opposite Alec Guinness’s George Smiley – one of the most iconic British TV characters of all time. Reid’s performance in Smiley’s People, with genuine tears rolling down her cheeks as she recalls her shared past with George Smiley, is incredibly moving. It rightly won her a BAFTA.

The older nymphomaniac Kath was a persona Reid found it hard to shake off, but she topped the billing in the 1970 big screen adaptation of Joe Orton’s black comedy as she fixated on young, blond-haired Peter McEnery. At once sinister and hilarious, Reid’s Kath is one of her most enduring characters.

1. The Killing of Sister George

The 1968 feature film probably remains Reid’s best-known work, and it was controversial at the time for depicting lesbianism. June Buckridge, Reid’s washed-up soap actress character, is fascinating and unsympathetic, as she is in an unequal relationship in which she bullies her lover, played by Susannah York, and also commits sexual assault against nuns. Although Reid later became better known for playing eccentric old dears, her performance as ‘George’ is a reminder of just how powerful she could be.

If you want to read more about Beryl Reid’s life and career, seek out her autobiography, So Much Love.

In this article:Beryl Reid, Doctor Who, Tinker Tailor Soldier Spy