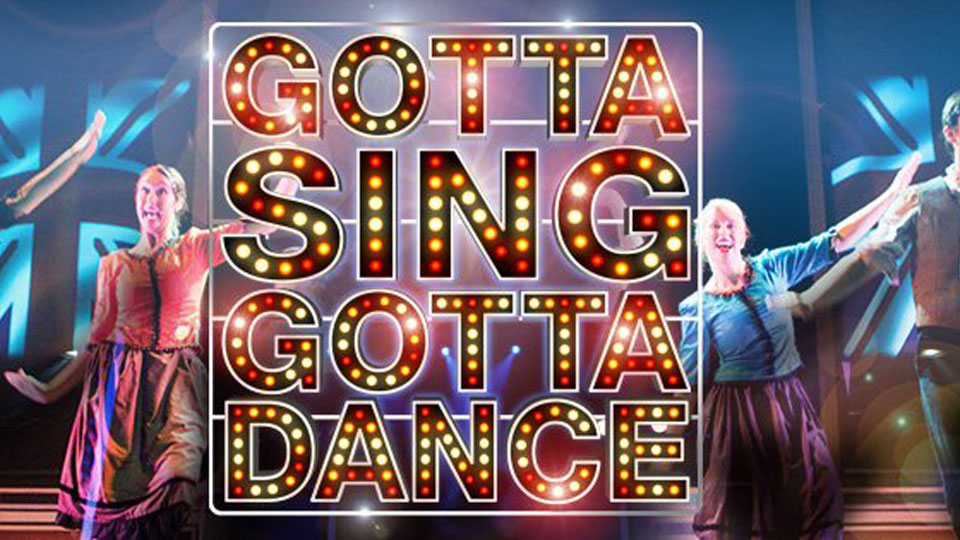 Four females, three males: all astonishingly talented young performers. 105 costumes, 60 songs, 50 dances (including lots of tap) and live music. Gotta Sing Gotta Dance delivers an evening of edited highlights from the world of musical theatre. It’s current stop is at the Richmond Theatre before it heads off on a massive UK tour.

If you love show tunes, glamorous performers, dazzling dance routines and moving showstoppers then this will be the show for you! It’s jam-packed with the hits of the West End and Broadway, delivering non-stop pure entertainment.

As with any greatest hits style of entertainment, the thrills are in the here and now. Whilst it’s great to hear terrific renditions of Marilyn Monroe and Tell Me It’s Not True from Blood Brothers, without watching the whole story from start to finish it necessarily has a different sort of emotional impact, and the show wisely sticks to more upbeat numbers. There’s no shame in entertainment for entertainment’s sake – and Gotta Sing Gotta Dance is ideal family entertainment for ages five to one hundred and five. It’s the perfect tonic to a long day at work and guaranteed to put a smile on your face and start your foot tapping.

Commendable effort is made to cohere the routine into a solid show, and this is well-achieved with a number of devices, most notably a friendly rivalry between American and British musicals. Act Two features a Lloyd Webber medley. Whether that’s something to be enjoyed or endured is a matter of taste. (To me it satisfies the issue of the cross-Atlantic rivalry.)

Kicking off with Copacabana and Top Hat, the show features hits from the earlier musicals too; and fans of Gene Kelly and Fred Astaire will love the singing and dancing tribute to them, with an innovative recreation of the movie shoot for Singing in the Rain. There are one or two surprising inclusions: am I the only one who can’t hear Boogie Woogie Bugle Boy without think of Morecambe and Wise with Leonard Rossiter and laughing out loud? The inclusion of Taylor the Latte Boy is a welcome one: a song new to most of the audience about the doe-eyed infatuation a young woman has for a boy working in Starbucks. Taylor’s Rebuttal (a reprise told from Taylor’s point of view) brings the house down…

What really ignites Gotta Sing Gotta Dance is that the actors all play to their strengths. Between them, there are plenty of those and a ridiculous overabundance of talent. Rebecca Lisewski shows brilliant comic timing, and brings a touch of humour to most of her routines; a strength shared by David McMullan (especially in a song from Spamalot and as Taylor the Latte Boy). Simon Adkins has a blast playing the American and sombre parts (he takes on Stars from Les Misérables), and makes a hilarious reference to his involvement in Viva Forever, the flop Spice Girls musical (sorry, Spice Girls fans…); and Adam Rhys-Charles has dazzling stage presence throughout. They are all established performers and ones to watch.

Running to over an hour on each side of the interval, Gotta Sing Gotta Dance delivers a great evening’s entertainment, and the show builds towards a breath-taking finale: three-minutes against the clock that incorporates every current West End musical, which is both thrilling and hilarious.

Gotta Sing Gotta Dance is a slick, stylish and well-choreographed show. (So relentlessly fast-paced in fact that the house technician struggled to keep up with the cues last night.) Every inch the crowd-pleaser, and performed with energy and passion, it’s a hugely enjoyable evening’s tribute to musical theatre. Catch it when it arrives at a venue near you.

To find out more about the production and the tour dates, visit the Flying Music website. To book your tickets, visit www.flyingmusicboxoffice.com.