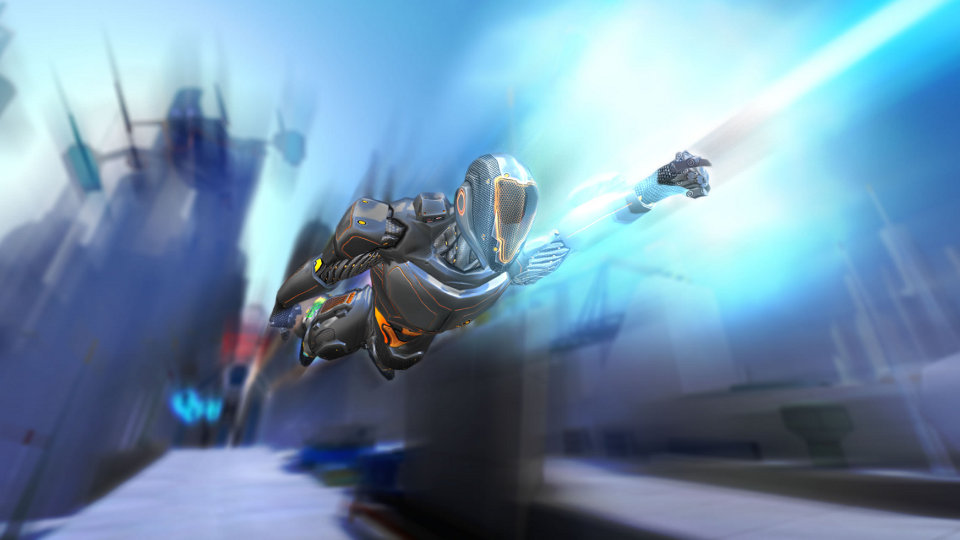 RunBot is a free-to-play endless runner from Spanish indie developer Bravo Game Studios with Marvelous Games handling publishing. We’ve been checking out the iOS version but the game is also heading to Android platforms later this year.

The game is set in the year 2371 in MegaCity Five on Earth. Players take the role of RunBot an advanced artificially intelligent machine which was designed as an unstoppable killing machine. Unfortunately for the creators RunBot is a bit too clever and decides to rebel against their plans and escape.

The gameplay is mix of other games in the genre such as Canabalt, Temple Run and Stan Lee’s Verticus. At the start of each game RunBot escapes and then simply keeps running. It’s your job to guide him to freedom via simple touch gestures and tilt movements.

Swiping up on the screen makes him jump or climb obstacles. Swiping down makes him roll or slide under them. You can also swipe left or right to move across the screen or turn corners. As you perform these commands RunBot executes a variety of Parkour moves to traverse the environment. Each run is split into sections and after a Parkour heavy section you might be free-falling through a tunnel or using a jetpack to soar through the air. These different modes help keep the action interesting.

There are two different modes to play – casual and hardcore – but the game gets difficult fast on both. The further you run the more resistance you face including blocked paths, laser turrets, mines, moving barriers, flying police cars and drones. Some of these can be passed by activating your regenerating shield and crashing through them. Others you can tap on the screen to shoot them until they explode.

For an unstoppable machine RunBot is actually rather weak and this means a couple of mistakes and it’s game over. Another issue is that RunBot requires a near constant supply of energy to keep moving. Throughout the environment are hundreds of battery cells to pickup which replenish your ever decreasing energy stores. As well as avoiding the obstacles you need to pick a path that will give you the most energy. Running out of energy ends your run unless you have picked up super cores which are used as restart tokens.

At the end of each run your battery cells are totalled up and you are also given an amount of XP based on your performance. The XP you earn gradually improves your rank and as you get higher you can unlock upgrades that you can purchase with your battery cells. These come in four categories – energy, defense, systems and hacks. The upgrades do things like increase your energy stores, improve your armour and even add a jetpack.

As with most free-to-play games you can spend real money on microtransactions to help you. There are three areas you can spend money – battery cells, super cores and hacks. Buying battery cells makes upgrades easier to afford without needing to play as much. The super cores are useful if you are competing with friends or hoping to climb the leaderboards. Finally hacks boost your XP or the energy obtained from each battery and you can also jump straight to rank 100. The microtransactions are completely optional and range from £0.69 to £13.99 – a nice bonus is that a single purchase of any item removes adverts from the game.

Graphically the game looks rather nice and it uses a fullly 3D environment. There’s a nice variety of obstacles to pass and due to each run being randomly generated the game is different each time. This keeps you constantly guessing and makes each run exciting. One area we weren’t keen on is the repetitive music but you can turn it off.

If you enjoy endless runner titles then you’ll find a lot to like in RunBot. The short runs give it an addictive quality where you’ll just want one more go. Competitive gamers will also enjoy the Facebook integration so that they can challenge their friends.

RunBot is available now on iOS via the App Store for free and will be coming to Android devices later in the year.