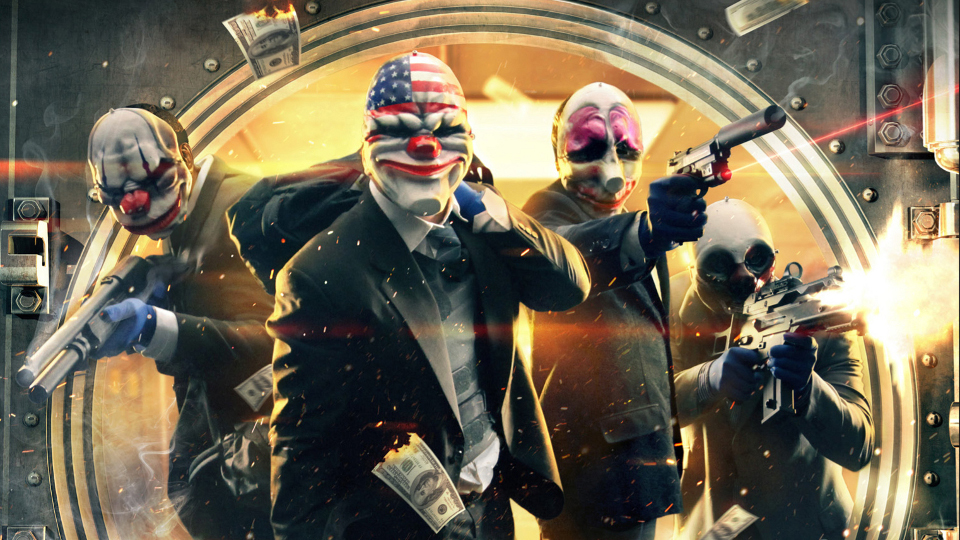 Payday 2 is the sequel to co-op shooter Payday: The Heist which was released back in late 2011. The first game was a download-only title for PS3 and PC which didn’t see a boxed release. For Payday 2 the developers, Overkill Software, have gone bigger and made a game that is available both online and at retail for PC, PS3 and Xbox 360. For the past few weeks players have been taking part in the Payday 2 open beta and now we’re here to give our verdict on the final PC release.

If you played the first game then you’ll already have a good idea of what to expect from Payday 2. Players must put together a crew of up-to four players to control returning criminals Dallas, Hoxton, Wolf and Chains. The game is best played with three like-minded friends but you can also play with random strangers or alone with AI controlled crew members.

After a brief tutorial where you visit your safe house it’s time to logon to the CrimeNet network in search of your next job. The contracts available to you constantly change and there’s a nice variety of missions on offer including jewellery shops, nightclubs and bank raids. Each contract has a difficulty and level of risk associated with it with the tougher ones bringing in a bigger payday if you are successful. New contracts and bigger multi-stage assignments are unlocked as you progress.

When you start a contract you begin in casing mode which allows you to check out the location to plan your heist. Here it’s worth spending time checking out entry and exit points, identifying security cameras and looking for the location of civilians, security guards and anything else that might cause you trouble. You have to be careful here not to be spotted or you risk ruining your chances before you’ve begun.

Planning your strategy is extra important because the game randomly changes each contract. This means that each time you play the location of security cameras and guards can be different and the floor plans of buildings can also change. This randomness ensures that every attempt is exciting and it’s impossible to carry out the same steps each time. Once you’re ready to begin it’s time to don your mask before putting your plan into action.

How you tackle a situation is entirely up to your team and it’s possible to go for stealth, guns blazing or a mix of the two. If you’re going for stealth you need to take things slow and take care to be silent and unseen. This is hard to do and requires the most teamwork but it is incredibly rewarding when you do pull it off. We often tried for stealth before things went bad and usually ended up resorting to shooting everything that moves. Things are definitely easier if all players are using the in-game voice chat.

To prevent the alarm being raised you need to take care of the civilians. You can do this by shouting for them to get on the ground so you can zip tie their hands together. Doing so also allows you to keep them as hostages which can be traded if a member of your crew is taken into custody. If the alarm is raised the police will arrive on the scene and the longer you take the more determined they become. The game will initially throw standard police at you before calling in SWAT in full riot gear or a sniper team. The AI will also adapt the response of the authorities based on how you are playing.

At the end of each mission each player is given a choice of three cards which can grant you a cash bonus or unlock an item such as a new weapon, modification or mask. Completing a contract successfully brings in a pile of money that must be laundered before you can spend it. This leaves you with a small cut after each job which you can spend on new equipment such as guns and masks. Money can also be spent on mission assets to help you such as blueprints, a faster escape car or inside help.

Completing missions also rewards experience which can level up your character. As you earn new levels you also gain skill points which can be spent in one of four profession trees. These are Mastermind, Enforcer, Technician and Ghost. Each profession brings its own perk such as the Mastermind being able to drop healing kits or the Ghost able to hack locks and jam certain equipment.

PayDay 2 can be played solo offline with AI players but this is often a recipe for disaster as the AI isn’t great. Playing online with real people is a far better experience than with the AI because the difficulty can be punishing. However playing with strangers can be worse than the AI if they aren’t prepared to co-operate. One job we were taking our time to get into a bank unseen and a random player joined and ran straight through the front door and started shooting which ruined our plans.

Graphically the game isn’t the prettiest around but the gameplay is so fun you don’t really care. There are a few strange things while playing such as you can open doors but can’t shut them. When playing with the AI they don’t seem to pick up mission objectives. This means you end up fighting your way out to the escape van with your first loot then fighting back through to get back in for more swag to complete a mission.

PayDay 2 improves upon the original and delivers a tense and rewarding co-operative multiplayer experience. With a group of friends it’s fantastic fun and there’s incredible replay value due to the dynamic missions. The developers are also promising plenty of DLC support over the next year as well so this is a game that should last you a very long time indeed.