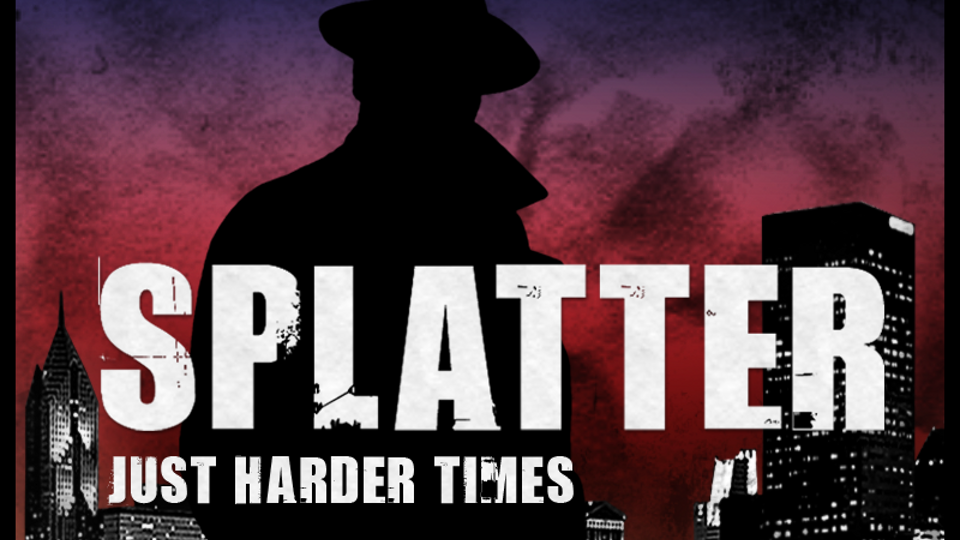 Splatter – Just Harder Times is a top-down shooter from German indie developers Dreamworlds Development. The game is available now on PC and we’ve been putting it through its paces to see what it’s all about.

In Splatter players take the role of a guy named Max who is sick of society and just wants to be left alone. Unfortunately he’s got no chance of a peaceful life when all chaos breaks out in the city he lives. Max emerges from his home to find the city overrun by some kind of zombie apocalypse and of course it’s up to Max to save the day.

Having the main character named Max instantly made us think of Max Payne and we’re sure the developers must be a fan. The storyboard cutscenes have a similar Film Noir style and Max even has a similar taste in clothes. There’s no bullet time or painkillers in sight but there are lots and lots of guns.

As you progress through the four-hour story Max gets his hands on a whole variety of weapons. These include pistols, shotguns, machineguns and more exotic weapons like flamethrowers and rocket launchers.  Around the environments you’ll find piles of cash that you can spend on upgrading your weapons at set points throughout the game. It’s a basic system but each upgrade feels worthwhile and it’s always fun to get new toys to play with.

The game features pretty much non-stop shooting and it isn’t just enemies that you need to shoot. Max also likes to use guns to open doors, windows, crates and just about any object he can find. Shooting stuff up is fun and it’s rare to leave any location without destroying it first.

The default control scheme uses the mouse for aiming and shooting with the WASD keys to move. The controls take a little getting used to but on the whole work very well. Max carries a flashlight which comes into play often as much of the game is set in dark environments. He also carries flares which can be used to light up an area. Flares are also useful because they disorientate the enemies and give you a few seconds breathing space.

There’s a wide variety of zombie enemies but nothing you haven’t really seen before. There’s the slow zombies, fast zombies, fat zombies, jumping zombies and more. They swarm at you from all directions forcing you to keep moving to stay alive. Splatter also features boss battles against larger tougher enemies and these are quite entertaining.

The game has a main storyline to follow but does give you choices along the way while speaking with NPC players. These often allow you to go off on side-quests. One quest had us clearing out a cave system of zombies and bugs while another sent us off out on a run to capture some robotic turrets.

While fairly linear and repetitive Splatter tries to mix things up and changes the pace of the action to help keep things fresh. One mission has you fighting your way through a gas filled building stopping at set points to refill your air. Another has you firing a mounted turret gun from the back of a moving vehicle.

Once you’re done with story mode the game has two other modes to keep you busy. The first is a basic four-player deathmatch where you all run around trying to rack up the most kills. More interesting though is survival which puts you up against huge waves of zombies to see how long you can survive. Survival can also be played in co-op and this mode is great fun and one that will keep you coming back to the game.

Graphically the game isn’t amazing but it does have a kind of retro feel to it. It does a good job at throwing large numbers of zombies at you and makes great use of lighting effects. The destructible environments are also nicely done and it’s hard to walk past anything without popping a few rounds off to see if you can destroy it. The music is pretty good and helps set the atmosphere but we would have liked the gun sounds to stand out more.

One area that does let the game down is the localisation. The developers have already reworked this since launch and it has improved but the story cutscenes are full of mistakes and parts are difficult to understand. It doesn’t actually spoil the game but some more polish here would definitely improve it.

Overall we’ve been rather surprised by Splatter – Just Harder Times and have found it an enjoyable way to spend a few hours. The combat is fun and at times also tense. Fans of zombies, twin-stick shooters and survival horror games should definitely give it a look.

Splatter – Just Harder Times is available now via Desura at a cost of £7.99. If you want to find out more about the game head on over to the official Splatter website.