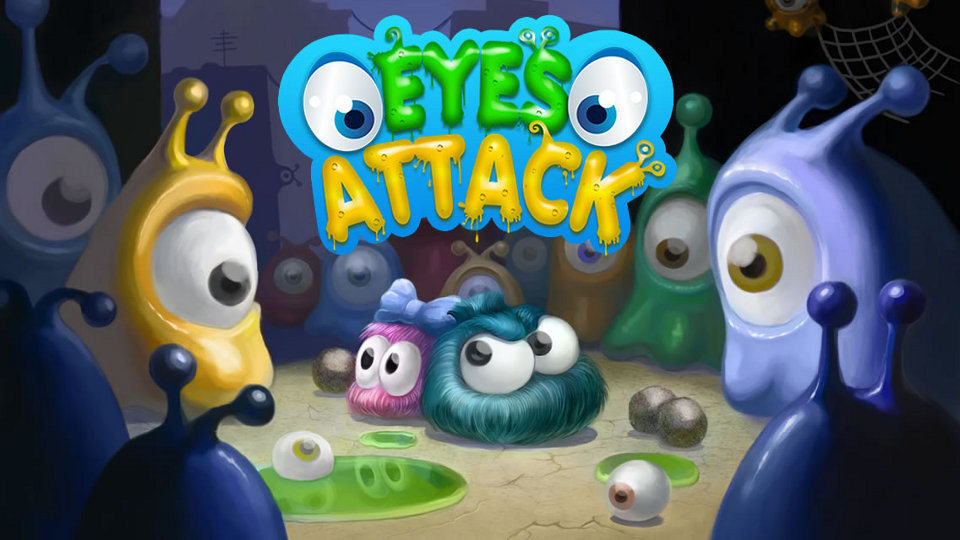 In the game the player takes the role of a fluffly blue furball named Hunter. The planet is under attack from a variety of one eyed aliens and it’s your task to defeat them with a handful of rocks. Hunter can shoot rocks out the top of his head which kill the aliens on contact. When an alien dies it leaves behind its eye for Hunter to collect.

Controlling Hunter takes practice but it’s actually quite fun once you get the hang of it. Tapping on the screen shoots a rock straight up into the air. Hunter only carries a finite number of rocks and the number changes depending on the level you are on. However rocks are reusable and Hunter can catch them or slide over them to pick them up.

Tilting your phone or tablet makes Hunter slide left or right. If you shoot while moving it allows you to throw rocks in the same direction. The faster you move the more power your rock will have. Rocks will also bounce off the sides of the screen and can kill multiple aliens for combo bonuses.

The aliens come in a variety of colours and start off small. They drop from the top of the screen until they hit the ground and then simply jump left or right. If they touch Hunter they die but take one of his lives. If he loses all of his lives then he becomes an alien himself.

To prevent this Hunter must shoot them before they land on him or throw rocks as he moves to kill them. As you progress the gameplay gets more challenging and things get hectic as the aliens get bigger and there is more of them. The bigger aliens can take more punishment and will even split into smaller aliens when shot. The gameplay actually reminds a lot of Capcom’s classic, Pang (Buster Bros.) which was released in the 80’s.

Some missions require Hunter to protect a female furball which adds a little variety. You can also collect special eyes which grant power-ups. Our favourite is the Tesla hat which can electrocute groups of aliens but there are many more such as the cannon, laser and immortal devil.

Pausing the game allows you to enable a video recording mode. This will make a video of your attempt which you can then edit, add voice or video and then share for others to see. This is all done via EveryPlay which you may have seen integrated into other games.

For a free game there is a generous amount of content included. There are four worlds with different settings such as City, Desert and Volcano. In all there are 160 levels to beat and you need to pass 20 in each world to unlock the next.  At the end of a level you are given a performance report that shows things like your score, accuracy, number of eyes collected and combos. Each level can also award three medals based on your performance. Each world also comes with a survival mode where you can see how long you last against the aliens.

As you would expect from a free-to-play title you can spend money on microtransactions. These are to buy more eyes and are completely optional. They may be attractive to some players as earning large amount of eyes through play can take a long time. £0.69 gets you 400 eyes with the most expensive of £10.49 giving 9000 eyes.  Eyes can be spent on power-ups, costumes, hats and abilities to make the game easier or more fun.

Finally there is a tournament mode that allows you to build your own challenge levels and then upload them for friends to compete on. You can customise things such as location, alien types and wind strength. The more features you include the more eyes you need to pay. To enter tournaments you also need to pay a number of eyes as entry fee and the winner takes this as a prize. This mode helps keep the game fresh and will delight competitive players.

Eyes Attack is a fun game that is packed with content. Some players will find the gameplay frustrating but it’s well worth a download to see if you like it. Those who enjoy it will be coming back to it for months.