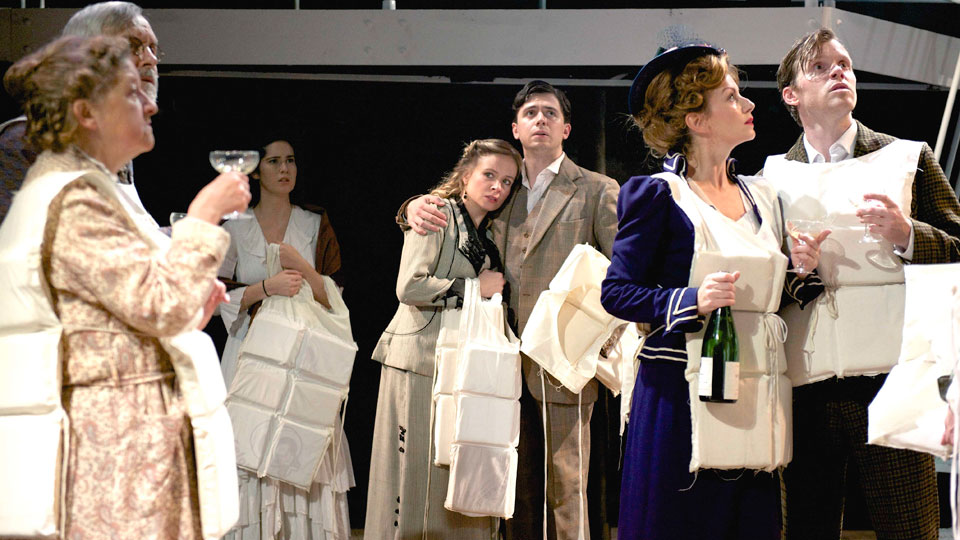 The new chamber version of the Tony Award winning Broadway musical – Titanic has arrived in London, residing in the Southwark’s Playhouse Theatre for a brief, six weeks run. The history of the ship, along with romantic tales of legend of those on board and their hopes and dreams, has captivated the public ever since that tragic night in 1912. We all know the story of that final hour on the 14th April 1912, the RMS Titanic, on her maiden voyage from Southampton to New York, collided with an iceberg and the ship that was deemed to be unsinkable, yet slowly and sadly sank into the depths of the cold and murky ocean. It is one of the most tragic disasters of the 20th Century, where 1517 men, women and children lost their lives. Several films, documentaries and plays have established the fascination with the Titanic, with supreme interest and curiosity about the ship that continues to this very day.

This musical version is based on actual characters aboard the greatest ship in the world, Maury Yeston (Nine, Grand Hotel, Phantom) and Peter Stone’s stunning musical focuses on their hopes and aspirations. From the very start of the opening scenes, this production oozed class, sophistication and a cast of actors and actresses that displayed first class performances. You knew they meant business from the off, with a superb and memorable opening performance by Ismay (Simon Green), followed by an incredibly moving number given by the company singing Godspeed Titanic. The intimacy of the venue and the historic and ghostly reminder of what happened on that fateful night was captured magnificently. There were so many stand out scenes in the first half, that it is difficult to pin point the exact highlights. Rapturous applause seemed to dominate the theatre and the audience were lapping up the show and every scene.

The music and lyrics have perfectly been written by the supremely talented Maury Yeston. We really were not expecting such dramatic songs, that reminded us at times of the power of songs from such classical musicals as Les Miserables. Everything that a musical should aspire to be is demonstrated in this show. We witnessed acting of the highest calibre, songs that were perfectly and joyously choreographed to and songs that allowed us to get lost in the emotion of it all. We often found ourselves mouthing the words ‘wow’ whilst we sat and watched in amazement at how good a show it is.

This version of Titanic hits all the right nails on its head. It displayed all that is famous and accurate about the ship’s history, along with a script that encompassed compassion and love, it was infused with great humour and the one-liners that permeate very subtly throughout the musical, were excellently executed. We experienced goosebumps whilst watching this production on several occasion and we even had a little tear in our eye when the cast took their final bows to a worthy full-house standing ovation.

Of course, we all know the story of Titanic and its ending. But despite knowing the outcome before going in to the theatre, this is a musical that we would gladly go to see over, and over and over again. We honestly cannot think of a time where we have been so moved by a combined cast of such talented actors and actresses in a musical shown in London, we take our hats off to each and every one of them. If there is one musical you should see this summer – it is this one. The Southwark Playhouse is a gorgeous and intimate venue for this show, but we would adore it if this was made to be a main feature in London’s West End. The show is full of power and class.