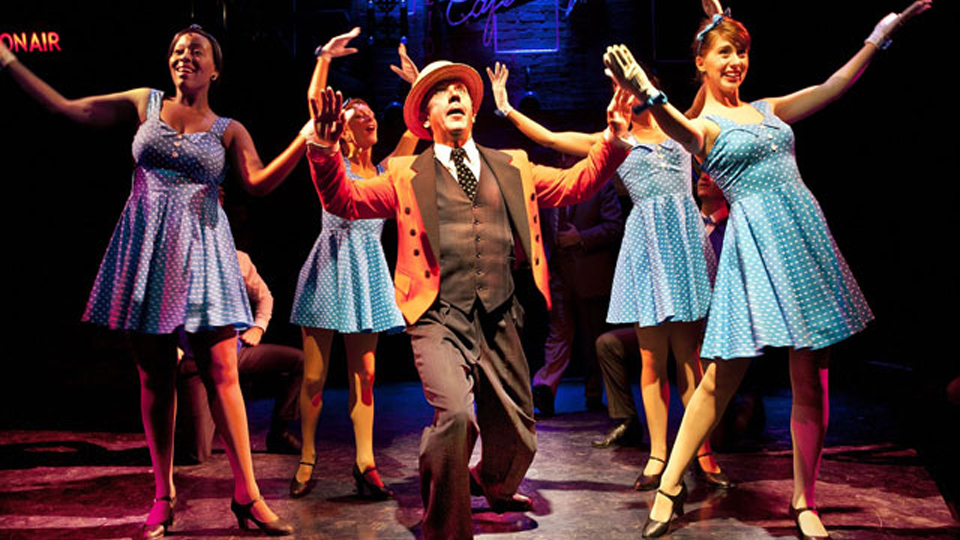 Bustling musical Sweet Smell Of Success, currently playing at the Arcola Theatre, is set in New York’s media world of high-fliers and powerful gossip columnists in the 1950s. Based on the 1957 movie of the same name, the 2002 musical has probably been revived to tap into the renewed popularity of the era through TV shows like Mad Men.

JJ Hunsecker (David Bamber) is the man with everything. With a readership of sixty million, as he frequently reminds everybody, he’s one of the most powerful voices in the media, deciding who’s popular and who’s dirt; capable of making and breaking careers; with every young press agent in town rallying around him desperate for their stories to make his infamous and influential column. When Hunsecker takes Sidney Falcone (Adrian der Gregorian) under his wing, he gives the budding young press agent everything he ever dreamed of. But when he demands Falcone controls his sister Susan’s (Caroline Keiff) love life, Sidney is forced to choose between his thirst for success and his moral scruples, where a happy ending for everyone is the only impossible outcome.

There are few actors better at playing oleaginous types than David Bamber, who was a memorable Mr Collins in the BBC’s 1995 adaptation of Pride And Prejudice. In slick suit and coldly reflective glasses, he cuts the right image, and with a charismatic performance of sly charm with an undercurrent of menace, Bamber brings the character to life and turns in a memorable performance that’s part-politician and part Bond-villain. Playing opposite him is Adrian der Gregorian as Sidney, a more affable and grounded man, but so driven by success as to be capable of anything. It’s Sidney who changes the most throughout the story, and der Gregorian’s carefully controlled performance guides the audience on the emotional journey at the heart of the piece.

The subplot involves Susan’s romance with a musician, Dallas (Stuart Matthew Price), and they are perfectly matched on stage as a romancing young couple. Price has the best voice of the cast, with his rendition of I Cannot Hear The City a spine-tingling highlight.

The musical score, by the late Marvin Hamlisch, is delightful, and very evocative of the New York jazz scene of the era. It’s part -dusky, part-sleazy and often spiky, with a hatful of songs you’ll be humming on the way home, with Welcome To The Night and At The Fountain proving amongst the best hits, and the Finale an appropriate hair-raising showstopper. This production boasts an impressive band. There’s nothing quite so magical as a live accompaniment to a musical, and the talented septet are note perfect, bringing to life Hamlisch’s sumptuous score with plenty of variation in pace and power.

The book is by John Guare (Six Degrees Of Separation) and it proves the weakest aspect of the show. Many jokes fall flat, the dialogue is horribly stilted in parts, and the mechanics of the storytelling are often clumsily obvious. It’s not quite badly written, but the structure and the dialogue don’t serve the story and the lyrics quite as well as they should, rendering the overall effect less impactful than it ought to be.

That said, director Mehmet Ergen crafts a gutsy and slick production, with an entertaining ensemble who fill the stage with joyously camp dance routines, flitting in and out of supporting characters along the way. Veteran performer Morgan Deare is great fun as a politician with skeletons in his closet, whilst Rebecca Louis’ tottering entrances as Hunsecker’s personal secretary Madge raises a smile throughout.

Sweet Smell Of Success is a well-honed and stylish show, and lovers of the 1950s period and the New York jazz scene of the era will find much to enjoy in this tale of the seedy world of gossip journalism. With a good cast firing on all cylinders, Ergen’s production breathes life into a good, if not flawless musical.