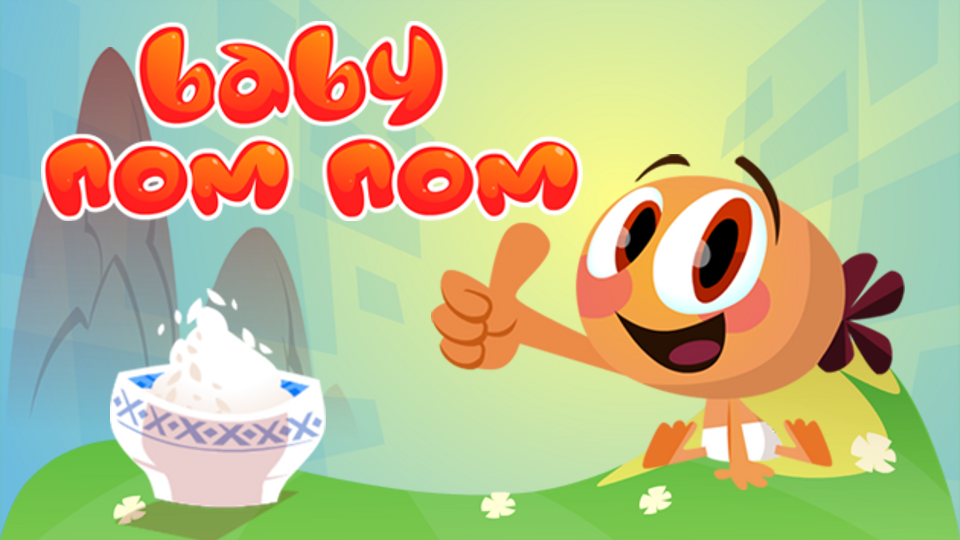 It’s only been six months since Playrise Digital released their debut title Table Top Racing for iOS. A racing title from a studio with talent from the WipEout franchise was the perfect choice and it is still one of our favourite mobile games of the year. It has also been very popular with players and the game smashed through the million download mark last month. A fabulous start then for the Liverpool-based indie studio and now they are back with their second title – Baby Nom Nom.

It would probably have been quite easy to churn out another racing title but Baby Nom Nom is a very different type of game. This is a physics based puzzle game that involves spinning mazes against the clock to feed a rather hungry baby.

As any parent will tell you feeding babies is tricky business and when hungry they just aren’t prepared to wait. Baby Nom Nom is no different and he sits there impatiently next to his rice bowl waiting for his next meal. Your task is to feed him by getting his rice to his bowl before the timer runs out.

The action is set across three different worlds – Dis-oriental, Inca’s Curse and Tiki Torment. Each world contains 12 levels to solve and you are awarded up to three starts based on your performance. The quicker you solve a level and the more rice you get to Baby Nom Nom’s bowl the higher your score will be. Levels also contain three pieces of fruit to collect which boost your score further.

Each level is essentially a maze that you must rotate in order to move the rice through it. You do this by touching the screen and swiping your finger in the direction you would like to rotate. The controls are really simple and work very well. The rotation of the maze is nice and smooth even if you swipe quickly. The physics of the rice is really well done and it takes some practice to keep it under control.

The early levels are simply about grabbing the fruit and then getting safely to the baby’s bowl. As you progress things gradually become more difficult and new elements are introduced. By the end of the first world you’ll have to contend with locked gates that you need to open by moving the rice to the corresponding coloured key. There are also walls that you can break if you pile enough rice on top of them.

The second world introduces coloured portals that you can teleport the rice through. Levels also start splitting the rice up so you need to keep an eye on different areas of the screen at once until you can combine them. The difficulty keeps going up and the third world features the best levels of the game. These contain all the previous elements but also introduce lava pits and fans to make feeding time even more challenging.

While this is going on Baby Nom Nom sits at the bottom of the screen smiling his face off. It doesn’t take long though for his patience to run out and he begins reaching up towards his food. As the time ticks down he starts to become nervous and more desperate for his meal. If you start to make mistakes such as losing rice in a trap or missing his bowl he pulls a disappointed face and sometimes does a hilarious facepalm gesture. If things go really bad he’ll literally cry his eyes out before throwing a big tantrum and hurling his bowl at your screen.

During a level you can choose to activate one of two power-ups. The first is the Clockstopper which pauses the timer to allow you a bit more time to beat a level or improve your score. The second is the Superbowl that sucks rice into Baby Nom Nom’s bowl making it much harder to miss. The game gives you a few of these power-ups to try out but if you want more then you need to visit the in-game store. These cost £0.69 for 10 of one power-up, £1.49 for 25 or £1.99 for 50. They are completely optional and only needed if you are really struggling or want to maximise your score. However it is a nice way to support the developers too.

The gameplay is really fun and addictive with the perfect difficulty curve. It’s the kind of game that once you start playing it’s hard to put down – plus you don’t want to leave poor little Baby Nom Nom upset and starving. When things go wrong you know it’s your own fault and the more competitive players will want to keep retrying until they are happy with their scores.

Most players will breeze through the first world and then start dropping stars and losing more rice through the second and third worlds. It’s actually not that hard to get through all the levels but if you want to go for all the achievements and earn all the stars and 100% rice it can take some time. Once you’re done with the levels the biggest draw will be staying ahead of your mates on the leaderboards or trying to climb the world rankings.

Graphically the game uses a bright cartoony style which fits the game perfectly. Baby Nom Nom looks and sounds brilliant and you’ll find yourself smiling back at him. The tougher mazes can be a little overwhelming on your first attempts but you soon learn them. If you don’t keep your rice together it can be difficult to see where a few lost grains have ended up but the game helps by highlighting them for you.

Overall we absolutely love Baby Nom Nom but just wish there was more of it. Once you’ve completed the levels the game runs out of surprises and the only challenges left are beating your own scores and climbing the leaderboards. Fingers crossed Playrise will be able to expand the game some more in the future. Puzzle fans should be sure to check it out.

Baby Nom Nom is available now on the App Store at a cost of £1.99/€2.49/$2.99. Also Playrise are donating 15% of the cost of each download to the SOS Children’s Villages Charity through an initiative with PlayMob – you can follow their charity page to see how much is raised.