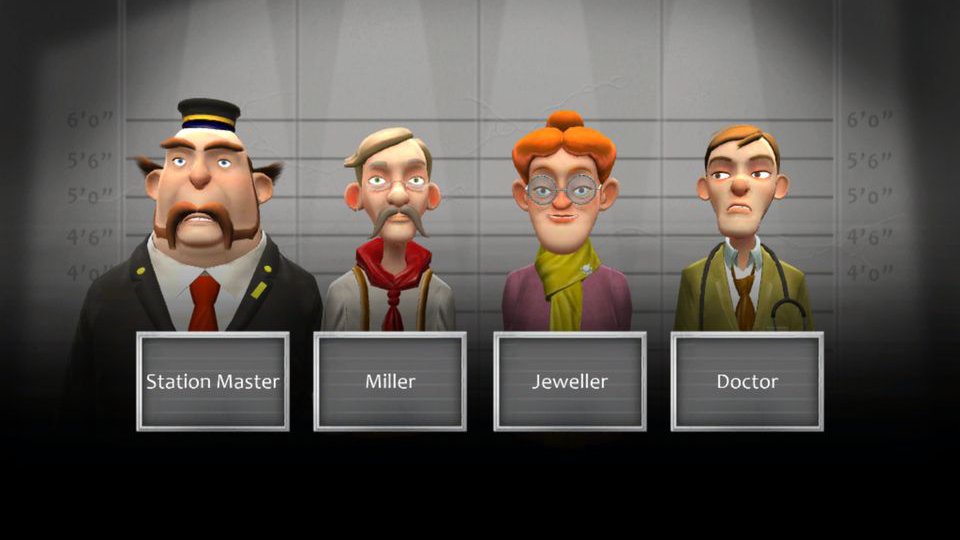 Blue Toad Murder Files is a murder mystery game from Relentless Software. Having previously seen release on PS3 and PC the game has now been ported to iOS. We’ve been using our detective skills to uncover its mysteries to see if it’s worth your time.

You play as one of four agents of the Blue Toad Agency but your choice has no bearing on the gameplay. Previous releases of the game allowed multiple players but this has been removed for the iOS release. At the start of the game you arrive in the sleepy town of Little Riddle for a break from crime-fighting.

Mere seconds after stepping off the train the Mayor is murdered – shot dead right in front of you on the platform. This is the beginning of an adventure which is full of twists and turns as you investigate the unusual events around the town which are full of murder.

The story is split up into six episodes which each run for around an hour each. Each episode begins with some kind of event that you’ll then need to investigate and solve by the end. This means paying close attention to what is happening so that you can identify the suspects.

At each stage of the game it points you in the direction of what to do next. It only ever lets you access locations where there is something to do. There are often a couple of choices of where to head next but your path through the game is a linear one and the story never changes. This is a shame as it reduces the replayability of the title.

As you go around the town in search of clues you meet many interesting characters and can interrogate each of the suspects. There is a large cast of characters and almost all of them are memorable. We were particularly fond of the gossiping old dears, police inspector, aggressive butcher and Basil Fawlty inspired Hotel Manager.

Usually when you speak with someone they have some kind of problem that you must help them solve in exchange for information. Each episode has 12 puzzles to solve and there is a wide variety of challenges on offer. There’s pretty much every type of puzzle you can think of including anagrams, maths, logic, spatial awareness, mechanical and those where you need to listen to someone talking to find the solution.

Each puzzle awards you a gold medal if you beat it quicker than the predefined time with no mistakes. The average time seems to be around 3 minutes and if you are slower or make mistakes you can end up with silver or bronze medals. There’s a nice mix of difficulty across the puzzles but we found the gold medal times to be generous. We completed most puzzles well within the time limits and only found ourselves struggling with a couple of them across the six episodes. If you’re really stuck you can skip a puzzle to continue the story and just miss out on a medal. If you skip a puzzle the game offers an explanation to how you could have solved it which is nice.

Throughout each episode you are given three tests to see if you’ve been paying attention. Each test is comprised of four multiple choice questions and you are must answer all four correctly to pass. However you do not need to be successful in order to progress. By the end of each episode you should have enough information to identify the culprit for the current crime. Even if you are incorrect when identifying the culprit the game still continues and explains what the correct choice should have been. This saves any frustration and you’ll kick yourself each time you are wrong.

The game is beautifully presented with lovely cartoon-like graphics. The whole game is rendered in 3D and the characters are wonderfully expressive thanks to some great animation. The star of the game though is the voice-acting with a fabulously over-the-top narrator and hilarious voices of each of the characters. This is definitely a very British game which is packed with humour that will have you laughing out loud.

We’ve heard some reports of crashing while playing the game but are happy to report that we didn’t experience a single problem during our playthrough. We also know the developers are hard at work on future updates which should hopefully fix issues that anyone is experiencing.

We’ve had a fantastic time with Blue Toad Murder Files and have enjoyed investigating the residents of Little Riddle. Our only real complaint is that due to the linearity of the game it’s not one you’ll go back to often once complete unless you simply must have all the achievements. If you’re a fan of murder mystery or fancy yourself as the next Miss Marple then you should definitely check it out.

Blue Toad Murder Files is available now via the App Store for £1.99.