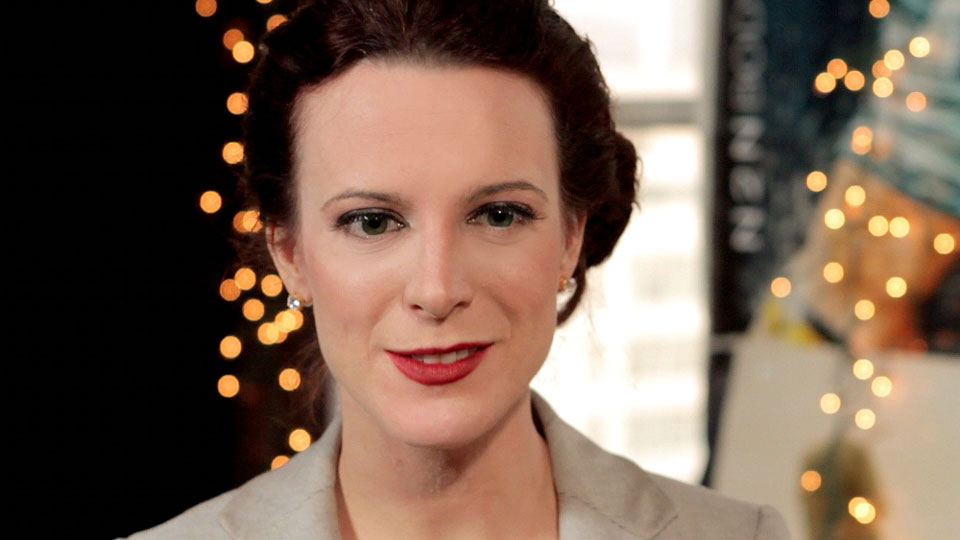 As Bloomers enters the second half of its second season, we continue interviewing the talented cast and crew in our weekly series.

Calico Cooper, who plays the wonderfully bitchy Lila, is the next member of the cast in the spotlight. The actress, who also sings on occasion (she’s the daughter of Alice Cooper don’t you know), has been with the show since season one and has a difficult relationship with Ross (Nathan Frizzell).

We chatted to Calico about the show, found out more about why Lila is the way she is, and talked about the difficulties that having famous parents can bring.

Hi Calico. How are you? Where does this email Q&A find you?

I am great! Feeling very fancy. I’m in New York working on a project AND going to a friends wedding AND going to another friends 30th birthday AND doing a one night appearance in my dad’s show while I’m here. So ya, lots of wardrobe changes. Very expensive suitcase charge from LA. I may have packed too many shoes. But I feel that one pair a day is completely appropriate.

You’re back on Bloomers for the second season. Lila has been making life hard for Ross so far hasn’t she? What else is in store for her this season?

I am back for season 2 simply to make Ross’ life a living hell. But I think season 2 shows Lila as a little more of a human being. A ball-busting, short-tempered, defensive, self righteous human. But a human none the less. Haha. In reality Lila isn’t all bad, you have to think that people that are that nasty, usually are masking lots of hurt and abandonment issues. And I think you see a lot more of her foibles this time around. You may even LIKE her!! Oh No!!

It seems that Lila is on the outside of the central group of friends on Bloomers. Do you think there’s a part of her that wishes she was part of the group?

I’m sure Lila would like to believe she’s above needing anyone. Especially Ross’ friends. But being surrounded by such a tight knit group of people that never include her, ya she feels the pinch. She tries every now and then to fit in, but her abrasive personality makes her a bit of a turd in the punchbowl. She’s trying. God bless her.

If you weren’t playing the role of Lila, which other character would you like to play in the show and why?

I’d love to play Karen. But Holly nails it so perfectly. Karen is sort of Lila without the self control and power elements. Which is why everyone likes her better. But Karen and Lila have similar character traits… they both get overlooked and go to extremes to fit in. They wanna be loved at all costs. They act out. I hope they discover those common bonds more in season 3. They should definitely go on a bender in Tijuana together. (Are you reading this Matt…?)

How did you originally get involved with Bloomers?

I got involved with Bloomers through being in scene study class with Fernanda and Matt. The Ivana Chubbuck studios. You know, it’s funny… that’s the perfect place to cast from, is a class you’re in together for a long time. Because you see people put up scenes every week. And you see their strengths and weaknesses. You see them knock scenes out of the park and you see them crash and burn. And in Ivana’s class you also learn their deepest darkest secrets. So auditions for some of the characters was not necessary. When you want a deranged bitch from hell with a heart of gold, look no further than me.

What’s the atmosphere like on set when you’re shooting?

Off screen Nathan (Ross) and I get along like gangbusters. We basically do a running comedy musical stage show until we are told to put a cork in it. I’m super tight with most of the cast as we were friends previously. So sometimes I have a hard time between takes talking to someone like Kristin Barker about her engagement and squealing like little girls, then on action I have to throw a box in her face and call her an idiot. Such is life. I wouldn’t have it any other way. lol.

Web series are looking likely to be the future of television. How important a platform do you think they are for actors and writers?

Web series are where it’s at because people all over the world can access it whenever they want it, when they wanna see it. Don’t get me wrong, TV series are great, but with web series (especially this one) I’m working with talented actors that I know and love, with messages I support, and I’m allowed to take risks and try things out as an actor because I’m in a nurturing environment. That’s not always available to actors on huge budget projects. But also it’s a testament to how artists will persevere to have their stuff seen. I love the first guy in a studio meeting that was like, “Oh really? You don’t want my TV show? Well I’ll put it on the internet. For free. And people will LOVE it.”

As well as being an actress you’re also a singer and you’ve performed with your father Alice Cooper. Do you have any plans to bring out an album?

You know, I am a total music buff. I am move the quickest to emotion through music. But as far as an album, no. I mean I can sing, I have sung… on a couple records. But the truth is, I’m more of an impressionist than a singer. Someone will say “Sound like Janet Jackson on this part” and I can do it. “Ok, this verse like Alanis Morrisette…” easy. You just gotta give me a jumping off point and I’ll sound like a famous person on your record. Still working on my Mariah Cary though… that may take a little more time.

Does having such a famous father make it easier or harder for you to establish yourself in the entertainment industry?

Harder. Most definitely harder. But I’m not complaining. I love my Parents. I’m grateful for my situation. They are the most supportive encouraging people on the planet. However we as a family never went the reality show route so people expect me to be what they see on TV with other celeb families. I won’t get seen for serious projects just because of the legacy a lot of my peers have left on reality shows. Don’t get me wrong, it’s not all of them. I have some dear friends who are celebrity kids that are driven gorgeous women and I wish them all the best in their artisic endeavors. I know what a challenge they face.

But nobody wants to deal with the “idea” of an entitled kid in casting or production. So I have to go out of the way to prove myself as an actor and a person. I have to be that much better. Again that’s why Bloomers in particular is so great. I’ve booked so many jobs from scenes I got to do on this show. They are like “Hey.. she IS an actor! I’ll be darned!”

I just finished a film for Asylum. By the way, SO much fun to work for. I got to do my own stunts and jumped through a sugar glass window and got to be posessed. Who does not love that!? Then I did a really heavy piece about paedophilia that got bought by the Sundance channel. I just sold my own horror movie, and am currently writing a comedy with some buddies at UCB and Groundlings. But I really want to start Bloomers season 3, I could really use that trip to Tijuana. Just sayin’…Matt…

Find out more about Bloomers at www.bloomerstheseries.com. Watch the latest episode Mum’s The Word below:

In this article:Bloomers, Calico Cooper