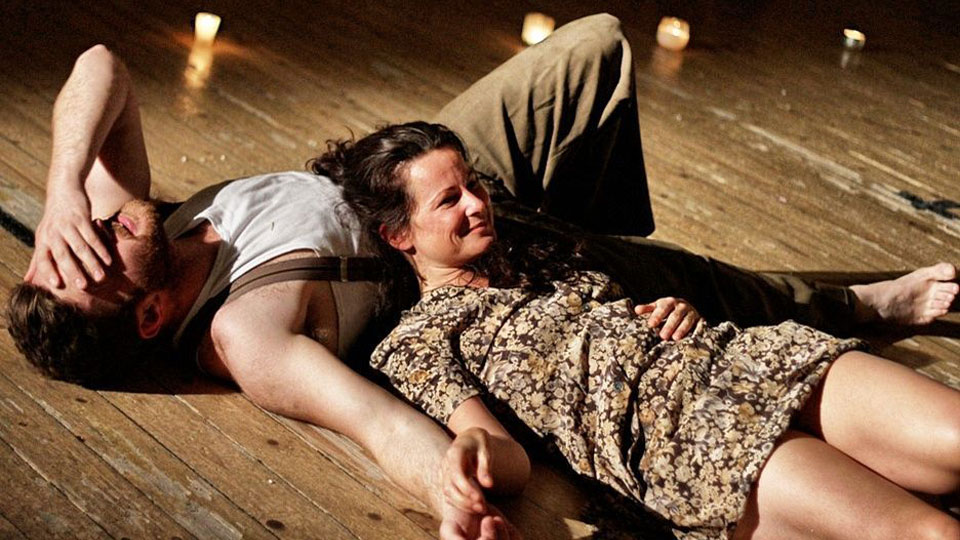 The brand spanking new Park Theatre near Finsbury Park is hosting Skin Tight in its studio theatre for the next few weeks. Playing simultaneously against Maureen Lipman and Harry Shearer in the main auditorium, it runs the risk of being overshadowed; but make no mistake, Skin Tight is a hidden gem well worth discovering.

Set in New Zealand, Skin Tight examines the relationship between Tom and Elizabeth over a long span of time. Running without an interval for around seventy-five minutes, the play offers a detailed examination of a human couple, deeply bound up in one another almost to the exclusion of everything else with a loving, sensual and often brutal relationship.

Skin Tight is a two-hander, with the history and intimacy of the couple sustaining the drama. It doesn’t have a linear plot or a conventional structure, and nor does it offer the audience much helpful signposting of the timeline. Rather, the chronology jumps forward in spurts. John Schumacher’s scouse accent seems incongruous at first, especially once you realise that the play is set in rural New Zealand, and it’s equally hard to pin down what year the action starts. Ultimately though, time and place don’t matter because of the universality of the tale. The structure is repetitive, with a tender make up following argument which in turn leads to another conflict, but the pacing evokes the ups and downs of any relationship, even ones far less savage than this.

The power of the piece lies in the intriguing characters and the passionate, belligerent nature of their intertwined lives. Intensity is sustained throughout, partly due to the fact that the actors never leave the stage and lurch from one heated or tender moment to the next; often pacing around one another like a lion and lioness (director Jemma Gross is commendably consistent in the animalistic nature of affection portrayed in the piece).

Perhaps a little too much is made of the physicality of the couple’s relationship at the very start, though this sets up in a playful context moments of more shocking violence later on. At times it’s difficult to watch. There’s a prolonged dalliance involving a knife that left us unable to blink and holding our breaths. Such moments strongly capture the way in which their relationship is like that of wolf cubs, relying on fighting and hurting one another every bit as much as tender words. Gary Henderson’s story is poignant, fresh and credibly told.

The production is further enhanced by excellent performances. John Schumacher and Angela Bull are great individually, both finding depths of humanity that is often attractive, sometimes appalling and always believable: but together there is palpable chemistry. They fight, argue and love, approaching all extremes with equal commitment.

Ultimately, it’s perhaps hard to accept that so much time has elapsed during the course of the story, and this aspect stretches credulity a little too far. But for an exceptionally well-performed tale of rural and lasting love, Skin Tight pulls no punches.