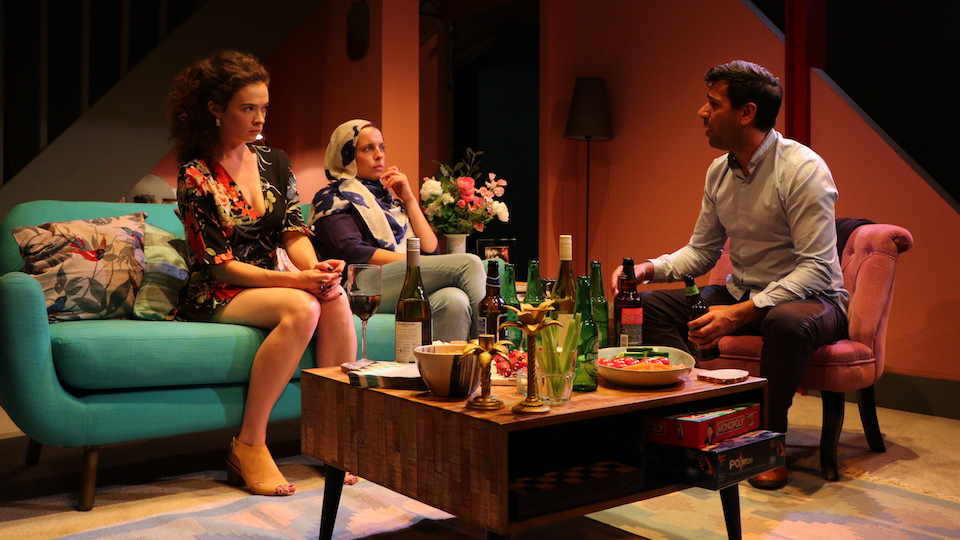 Naturalism. Realism. Call it what you will. There’s a kind of theatre that’s designed to highlight life in a particular way. So it is with Alkaline, a short well-made play about friendship under the pressure of fundamental change, played out through the lens of current anxieties.

We’re in the comfortable home of Sophie (EJ Martin) and Nick (Alan Mahon), on the verge of a get-together with old friend Sarah (Claire Cartwright) and her new fiancé Ali (Nitin Kundra).

Sophie’s immediately on edge, wanting the evening to go well (shades of Mike Leigh’s Beverly here). Nick’s in a different place altogether, cranking up the stereo and necking his beer. It’s only when Sarah enters that we understand the tension: she’s wearing a hijab, a sign of her recent conversion to Islam.

What follows is the expected unrolling of social positions as time ticks and jumps, and much drink (mostly alcohol) is consumed. There’s a definite nod to Edward Albee’s classic marital punch-up in Sophie and Nicks’ game of ‘Keep Calm and …’ And as a device to reveal the seething reality of two lives spent in amber, it’s effective. There’s also some awkward and effective comedy. A surprising rant from Ali. A scene in which Nick is cast to the top of the stairs, suggesting a relationship that is painfully arrested. And it’s all performed beautifully, pulling us slowly into an ordinary world, even when tensions are diffused a little too quickly.

It’s down to Aleesha (Reena Lalbihari), the uninvited guest, to up the stakes with a fierce reminder of Ali’s other life. But even here, the potential for a marital exorcism or two is quickly muted by a grown-up agreement. Perhaps this is Martin’s point: diffuse the drama to find your peace. Be the alkaline that Sarah describes when explaining the feel of her new faith.

Speaking of alkaline … the late-on reference to acid and alkaline is a little clangy, given so much work has been done to develop the play’s realness. It does, however, support the idea that life’s drama needs diffusing. And suggests we’re moving towards a climax that is more interested in balance, than roaring revelations.

It’s this very focus – of alkaline in an acid world – that is both brilliant and frustrating. To position a couple at odds with each other and themselves, and to reach for the answer to their corrosive lives in another couple’s choices … this is fine, engrossing writing. It absolutely grips. But it does mean there’s that tendency to neutralise the gathered tension throughout.

It’s the final moment, however, that was the most frustrating for me. And not because it left so much unsaid while making a very clear suggestion. No. This was a brilliant effect, a true moment of smart theatre. Frustrating because this brave choice suggests there’s the possibility of more theatrical games from writer Martin. That the naturalism could take some more exploring and this situation a tighter turning of its screws.

This is sit-forward, lean-in theatre. It’s provocative with a small ‘p’, and that’s no bad thing. It’s buoyed by beautifully natural performances. It’s just a little balanced at the moment. Perhaps because of its length and structure. Ultimately it’s neither acid or alkaline … it’s just a little too pH neutral. 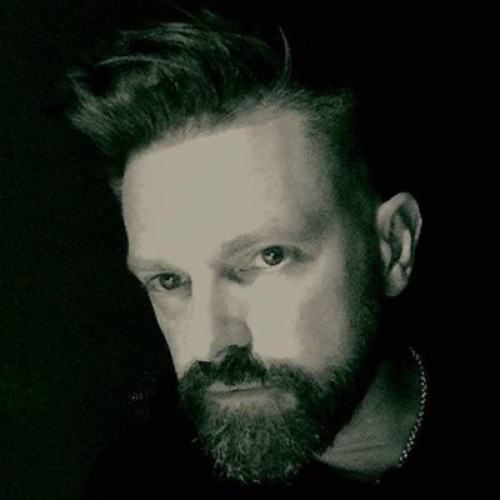 John Myatt
A writer of lyrics and scenes. And a huge fan of new writing, Sondheim and RhymeZone.
Previous article
Interview: Comedy heroine Helen Lederer on why she ‘might as well say it’ this Edinburgh Fringe
Next article
Interview: Suzi Ruffell on what keeps her awake at night in Edinburgh 2018 show Nocturnal

The Rise and Fall of Little Voice review