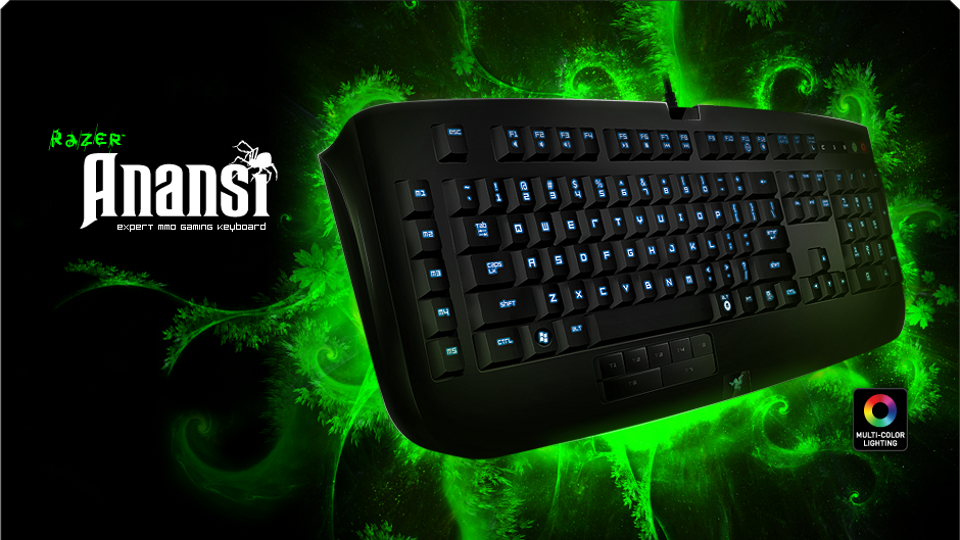 The Razer Anansi is an expert gaming keyboard designed with MMO games in mind. Having recently enjoyed the opportunity to test some of Razer’s gaming mice we were excited to see how their keyboards performed. As players of MMO’s such as World of Warcraft, Rift, Guild Wars 2 and Defiance we were keen to see if the Anansi gave us the edge during play.

If you play a lot of PC games then it’s worth considering spending some extra cash when it comes to mice and keyboards. Sure you can get a keyboard for a fiver but if you can afford it and you’re serious about your gaming then you deserve something a lot better. We’ve tried a variety of keyboards over the years but the feature list of the Razer Anansi is truly impressive.

Out of the box the Anansi feels surprisingly heavy but it’s also a very solid and well-made keyboard. It’s about the same size as your average keyboard and at first glance looks very similar to any other. Closer inspection of the layout reveals five extra keys down the left side and seven keys in the middle of the integrated wrist-rest.

A long braided wire features two USB ports to connect it to your PC. One of these powers the keyboard and the other powers the backlight to illuminate the keys. The colour of the backlight can be customised to your liking and gives just the right amount of illumination to see the keys in any light.

Razer says the keys on the Anansi are Hyperesponse keys and we can confirm they feel easy to press. We wrote this review on the Anansi and must say it’s great to type on and it performs really well. By default you can use the function key with the Function keys to access standard media features such as play, pause and mute. The function key can also be used to turn on gaming mode which disables the Windows key.

The keys on the wrist-rest are designed for use with MMO’s and are configured as modifier keys. These default to combinations such as Shift+Ctrl, Ctrl+Alt and Shift+Ctrl+Alt which MMO players will recognise. By having these key combinations mapped to a single button that is easily reached with a thumb press you can really make things easier for yourself. The thumb modifier keys take some getting used to over pressing combinations of real keys but it soon becomes second nature.

The most powerful feature of the Anansi is that the keys can be programmed to execute macros. You can setup macros in advance of playing via the Razer Synapse software. It is also possible to setup macros on the fly whilst playing which is incredibly useful to players who like to use the macro feature. The Anansi also supports multiple profiles that you can switch between on demand.

After spending many hours playing with the Razer Anansi we’re wondering how we managed without it. It’s a fabulous keyboard that has pretty much everything you’d possible want. We’d seriously consider pairing it up with a Razer Naga too as they would really well together. MMO players who haven’t invested in the Anansi yet should start saving. Highly recommended.

The Razer Anansi is available direct from the Razer website for £89.99. To find out more about Razer check out our recent interview with Razer CEO Min-Liang Tan.