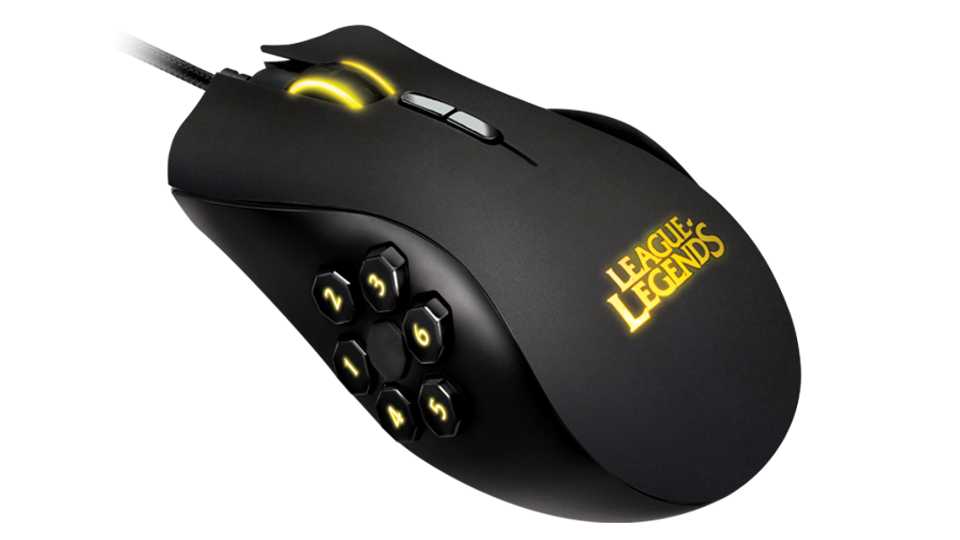 The Razer Naga Hex is an expert gaming mouse designed for Massive Online Battle Arena and Action-RPG games. If you’re the kind of gamer who just focuses on these types of games then a specialist mouse is definitely worth considering. The Naga Hex has been around in red and green editions for a while but now Razer are back with a League of Legends collector’s edition. This edition features a yellow glow and pulsing League of Legends logo. In addition to testing out this mouse we’ve also been using it with Razer’s League of Legends Goliathus mouse pad.

If you play MOBA games such as League of Legends and DOTA 2 or Action-RPG’s such as Diablo III, and Torchlight II then you’ll know they require a lot of fast button presses. The Razer Naga Hex is designed with this in mind and features a circle of six-hexagonal buttons with a thumb rest in the middle. These buttons have two default settings which bind them to the 1-6 top row keys or the 1-6 numpad keys. Swapping between these modes is done via a switch on the bottom of the mouse.

Having used a version of this mouse previously we didn’t find the learning curve quite so steep this time. However if you’re new to the mouse be warned that the hex buttons take some getting used to. Expect to make plenty of mistakes at first but stick with it and you’ll start to wonder how you did without them. Once your thumb has adjusted to the new movements they are incredibly easy to press and we were surprised just how quickly we could move between them. Razer claim the mouse can cope with up to 250 clicks per minute and having tried it out we believe them.

Clicking buttons so quickly does lead to click fatigue but the more you use it the easier it becomes. The buttons on the Naga Hex are definitely quicker than using the keyboard or clicking on-screen icons with the mouse pointer. To ensure maximum comfort the mouse comes with 2 different thumb rests that you can swap out to suit how you grip the mouse.

The mouse is of average size but doesn’t feature an ambidextrous design. Instead it’s moulded to your right hand and features a rest on the right side for your non-button pressing fingers. The shape of the mouse didn’t suit us right away and again led to some tiredness after extended play. Being a little different to a standard mouse shape means you hold your hand in a position that you might not be used to. Again this gets easier the more you play.

The Razer Naga Hex again features a 7ft thin braided wire removing the need to worry about batteries running out during an important match. The wire is light and flexible meaning you won’t even know it’s there but be warned these do tend to fray a little over time if they rub on the edge of your desk.

Like the all Razer kit the Naga Hex is a breeze to setup and just requires a USB port. By downloading the Razer Synapse 2.0 software you can also ensure you have the latest updates, configure the mouse how you like it and save your profiles to the cloud. The cloud feature is great if you play from a variety of machines as you can login and download all your settings via the web.

In testing the mouse we found it performed well in a variety of games but is definitely most useful in Action-RPG’s and MOBA games. It’s also a good choice if you play MMO’s and we were able to play World of Warcraft quite easily with the mouse and almost no use of the keyboard. However it’s also worth noting that if MMO’s are your preferred genre the standard Razer Naga has a 12-button grid on the side which is even more useful.

The League of Legends Goliathus we’ve been testing is roughly double the size of a normal mouse pad at 355mm x 254mm. The extra size ensures you don’t run out of room or hit the edge at a critical moment. It’s nice and thin with a rubber base which ensures it sits on your desk and doesn’t move. There’s an anti-fraying stitched frame around the mat which will help the lifespan of the mat.

The surface of the Goliathus is designed for precision and speed and uses a slick cloth weave. It feels soft to the touch and in our testing we didn’t notice a single mistake during play. This is obviously a great choice of mat for League of Legends players due to the some lovely artwork from the game as well as the League of Legends logo and a small Razer logo as well.

The Razer Naga Hex and Razer Goliathus mouse pad are a brilliant combination from Razer and perfect for using together. If you focus your gaming on MOBA or Action-RPG’s then we recommend you check them out. To sweeten the deal for League of Legends players these products also come with a code to unlock Tryndamere, The Barbarian King for use in the League of Legends game.

To find out more about Razer check out our recent interview with Razer CEO Min-Liang Tan.