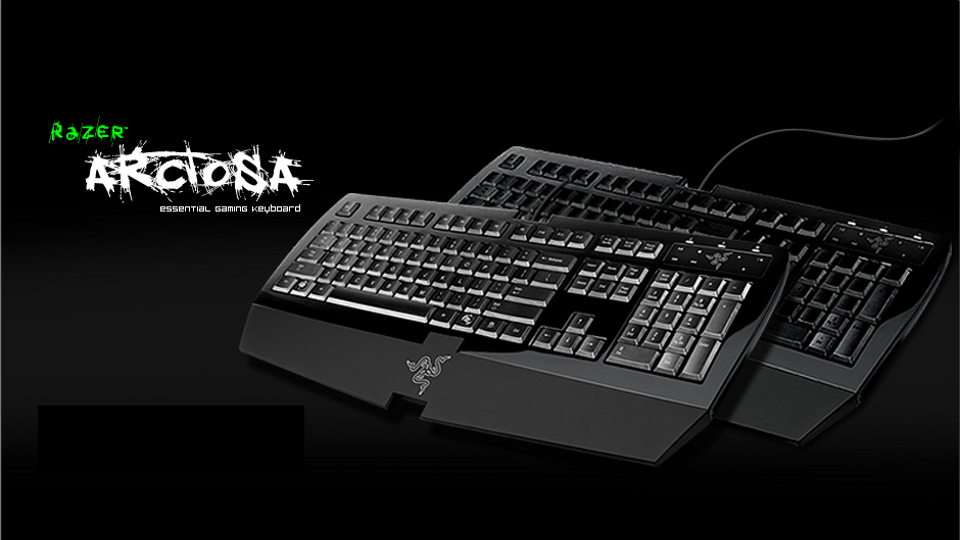 We’ve been blown away by the quality of recent gaming mice and keyboards that we’ve tested from Razer. However their products tend to cost a fair bit more than most. The Razer Arctosa is a more budget level gaming keyboard costing around £45. The Razer Arctosa is available in two different editons – silver on black or black on black. We’ve been testing the black on black version to see how it stacks up against their pricier offerings.

When you take the Arctosa out of the box you’re left with a rather light and slim keyboard. First impressions were that it looks a little cheap, especially when compared to the other products we’ve seen from Razer. On the front edge of the keyboard is a wrist-rest which we found to be too shallow. If you want to remove the rest then you’ll need a screwdriver.

It’s a pretty basic no frills keyboard with no extra keys that many gaming keyboards offer. The keys are low profile which makes it feel much more like a laptop keyboard. Some players may prefer this style but it didn’t suit us at all. The keys are described as Hyperesponse but we found that it was too easy to press the wrong keys during gaming sessions.

One thing we found really odd is the black on black choice as this makes the key labels near impossible to see. We do tend to touch type but the times you lose your place or have a quick glance at the keys you’re left confused. It is possible to see the key labels from an angle or if you have a light shining on them but this isn’t practical. There is no backlight option on the Arctosa so the difficulty in seeing the labels really would be a problem for many gamers. We’d highly recommend the silver option unless you just want to show off to your mates.

In the top right of the keyboard is a media panel that features the standard media keys and a Razer logo. The look of it screams touch panel but sadly it’s just a bit of plastic covering some buttons. We found these difficult to press and actually hated them. The Razer logo can be used to switch profiles on the fly.

Above the media panel are the standard lights for caps, scroll and num lock. On the Arctosa these are three very bright white LEDs and the position of them isn’t great. For us they just shine right into your eyes and are really off-putting. We ended up covering them so we couldn’t see them.

A big selling point of this keyboard seems to be the fast response times of the keys. They are very easy to press quickly and the Arctosa scans 1000 times a second looking for keypresses. It has a tiny 1ms response time and we can say that when you press the correct keys it does feel really responsive.

A fancy feature of the keyboard is anti-ghosting technology around the WASD gaming keys. As you probably know many games use the keys around this area for input. Some keyboards have a problem keeping up with many keypresses in short spaces of time. The Arctosa does seem more responsive than other keyboards that we have tried.

In some games you find yourself performing the same keystrokes over and over again. To help you out the Arctosa has fully programmable keys that allow you to setup macros. These can be a huge time saver and really simplify things when playing. The option to have multiple profiles also means you don’t need to constantly change these when you switch games. Finally there is a gaming mode option to disable the Windows key during play.

Sadly we’ve found ourselves rather disappointed by the Razer Arctosa Black. However if you aren’t put off by laptop style keys and are after a cheap macro capable keyboard then it might be worth a look. We’d recommend trying one out before you buy and maybe going for the silver version. If you can afford it though seriously consider spending a little more on something like the Razer Anansi.

The Arctosa is available from the Razer website for £44.99. To find out more about Razer check out our recent interview with Razer CEO Min-Liang Tan.