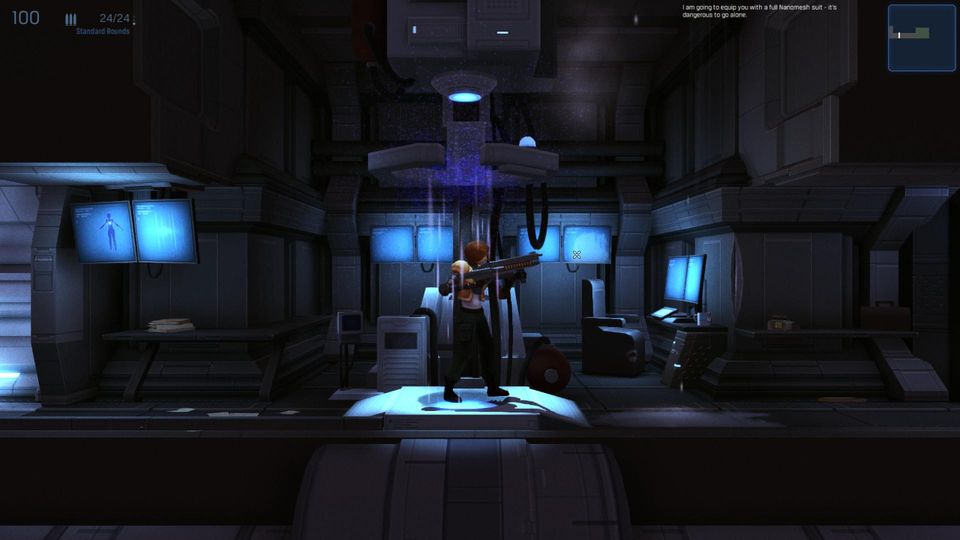 Dark Matter is a single player 2.5D adventure platformer which is the second title from indie developers InterWave (Nuclear Dawn). The team have recently taken to Kickstarter and Steam Greenlight to try and help fund the final development. We’ve been lucky enough to spend some time with a recent beta build to see how the game is shaping up.

The game takes place aboard a deep space exploration vessel, the Endeavor, which is drifting almost lifelessly through space. 70 years ago, one year into its mission, it mysteriously disappeared. The final transmission was a confusing static filled message that mentioned strange lights and angels.

You play as a female protagonist known as the Ensign who awakes from cryosleep to find herself seemingly alone aboard the Endeavor apart from an AI who helps guide you. You’ve probably guessed though that the Endeavor is actually full of deadly alien parasites and it’s your job to survive, find out what went wrong and of course get back home. As you progress through the game the story is expanded through logs that you find around the ship.

Before we go any further it is worth pointing out that the beta build we received contains around the first half of the game. As it’s still in beta form and incomplete some areas are still in need of work and things are probably going to change somewhat before the final game. The team pointed out that the areas that need additional work include weapon balancing, pacing, AI improvements and difficulty. They predict this is going to take two months effort which they are hoping will be funded via their Kickstarter campaign.

Dark Matter is setup much like Metroid (1986) where you are expected to explore your environment and certain areas are only accessible after you have acquired the relevant items. There’s limited platforming on offer as the focus here is more on action and adventure.

The way moving and shooting is handled brings back memories of the MS-DOS classic Abuse (1996). Although viewed from a 2.5D perspective the control scheme feels familiar as it is near identical to that of a modern First Person Shooter. You use your keyboard to move and mouse to aim your weapon. Holding right mouse gives you a laser sight that makes aiming a little easier. Combat requires quick reflexes and enemies take your health quickly if you don’t kill them fast.

The controls take a little getting used to but overall work very well. A nice feature is that the direction you are aiming is taken into account when moving so it’s possible to backpedal to shoot while moving away from a target. Another thing we liked about the controls is that your cursor is also used for interacting with the environment. You can click on access panels to open doors, call lifts and to interact with certain other items,

Light and shadow play key roles in Dark Matter and you need to understand how to use them to your advantage. Much of the Endeavor is in darkness which adds to the tension as you never know what you might stumble upon next. You do have a flashlight that you can turn on at any time which allows you to see. However light angers the various parasites that you come across. For example shining a light on a smaller creature can cause it to rush you leaving you frantically emptying your current clip in panic.

Some areas of the ship are covered in what looks like a kind of parasitic slime. If exposed to light they start to blister and grow. Trying to pass them while angered causes them to explode which kills you in a single blast. To pass them you need to put them in darkness and let them calm down first.

Dark Matter features a simple crafting system using scrap and a substance called fullerene. These are harvested from crates and enemies to be used at crafting stations. Throughout the game you unlock blueprints for new items and upgrades. You need to craft things like health packs, ammunition and weapon enhancements to help you survive.

Although it still needs a fair bit of polish, graphically the game looks rather nice. The detailed environments look brilliant and the lighting in particular deserve a mention – we love how the developers are using it to affect the gameplay. The user interface feels like it needs more work but we know it’s on the todo list.

Overall we’ve enjoyed our time with Dark Matter and look forward to seeing how the game progresses. If InterWave can secure the funding they need and complete the development they could have a real winner on their hands.

Dark Matter is due for release on PC, Linux and Mac later this year. You can help and support development by visiting the official Dark Matter website, Kickstarter and Steam Greenlight pages.