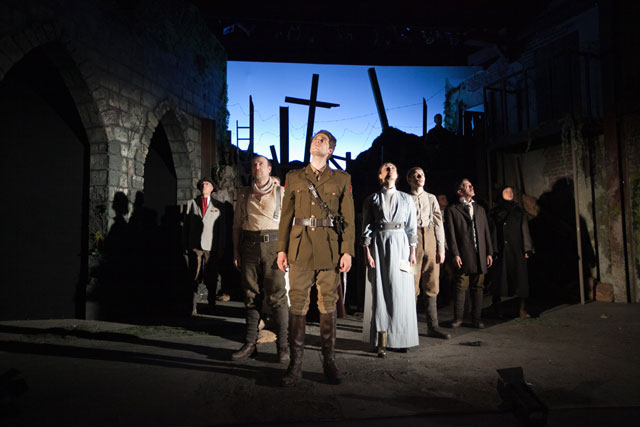 Sebastian Faulks’ celebrated epic novel of love set against the backdrop of WWI trench warfare has been dramatised for television, and now enjoys a brand-new stage adaptation that is touring the UK, currently playing to audiences at the Churchill Theatre in Bromley.

Birdsong tells the tale of a young officer, Stephen Wraysford (Jonathan Smith) who has returned to France on duty, now posted to a trench close to the Somme, neighbouring the fields where only a few summers previously he had fallen in love with local married Frenchwoman Isabelle (Sarah Jayne Dunn) and embarked on a passionate affair. It’s a bit like a heterosexual version of Brideshead Revisited: different wars – but exactly the same dramatic device.

The story is told predominantly through flashbacks, with the action rapidly lurching from the trenches to a pre-war French village on a summer’s day and myriad other locations. It’s the sort of thing that most playwrights, certainly those with a penchant for the Aristotelian unities of time and place, may ordinarily baulk at. But enormous credit to this production for the extraordinary pace of interchanging scenes and some clever (and universally stunning) design work by Victoria Spearing which, coupled with Alex Wardle’s first-class lighting, ensures that the story moves along with beautiful fluidity. It requires very little work from the audience’s point of view to determine where and when the events on stage were meant to take place within the non-linear chronology. There are a few clunky expositional lines, but they stick out like a sore thumb against an elegant and economical script.

There are two interlinking stories that pull on the heartstrings. There’s the love story between Stephen and Isabelle: he learns that she is being physically abused by her husband Rene (Malcolm James) and determines to rescue her from the domestic abuse and ensure they live happily together thereafter. Naturally, the course of true love doesn’t run smooth. We learn this story through dribs and drabs as we see Stephen in the present day, losing his mind in the trenches, facing up to omnipresent death, squalor and the idiotic leadership of High Command. This parallel story develops a friendship between Stephen and a sapper called Jack (Tim Treloar), an unlikely meeting between two worlds poles apart, since class division was still rife at the time.

Both elements pull on the heartstrings, and are well-dramatised here, but the most successful in terms of emotional engagement is probably the wartime story. The romance is fairly formulaic, with echoes of Ondaatje’s The English Patient, and a peculiarly stylised love scene – conspicuous for being the only moment of heightened reality in the entire show – leave few surprises and the odd awkward staging solution. It does play more to the strengths of lead actor Jonathan Smith, who, like many actors of his generation, eschew internalising emotion for a constantly busy surface tension. Sarah Jayne Dunn as Isabelle plays in much the same style. Ultimately, it’s possible to care very much about the characters in the trenches (including Stephen), but feel relative indifference as to the fate of the lovers.

The performance we found utterly beguiling was Tim Treloar as Jack. Treloar paces his character’s journey with impeccably skill, and I defy anyone not to be at the very least misty-eyed by his portrayal, and by the astonishing richness of his characterisation. Treloar’s Sapper Jack Firebrace easily ranks as one of the best performances we’ve seen this year.

Despite a few misgivings over the execution, Birdsong succeeds in packing a real emotional punch, most especially in the first half in the build-up to the interval. It’s slick and beautifully presented, with the interweaving scenes lending it an enjoyable dreamlike quality. Birdsong also captures the horror of the Great War and picks out the human drama of the people caught up in the conflict through accident of birth. It is intelligently and sensitively written, and in Tim Treloar contains a performance everyone would do well to see.