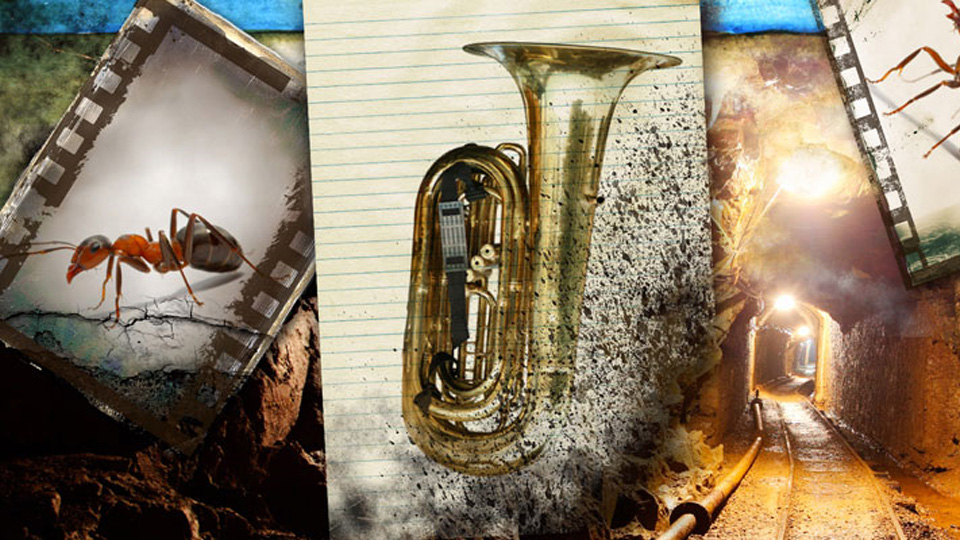 After The Rainfall arrives at the West Yorkshire Playhouse this month following a successful run on the Edinburgh Fringe. Following four stories that intertwine over seventy years, the play demonstrates how worlds collide and are inevitably influenced by politics, literature and technology.

The narrative follows four definite strands. In 1952 Edward is completing a reconnaissance mission with the help of Ishak, a self-taught pilot, over the Egyptian desert. Meanwhile in 1986, Claire is sculpting in Cumbria and awaiting an offer from University, whilst in 2013 Rashia is on a pilgrimage across Europe. Finally 2022 introduces us to John, who is promoting his popular science book about the society of ants in relation to human behaviour. These disparate stands have little relationship at the beginning of the play, however their threads gradually converge, influencing one another through past and future echoes.

The play has an immediate workshop quality, a vibrancy and freshness of ideas which is demonstrated through highly developed choreography and blocking. Evidently the product of teamwork and research-based practice, Curious Directive have honed their own particular mode of presentation in After The Rainfall to embrace dance, drama, pseudo-journalism and cutting edge motion graphics to present environments which feel naturalistic and wholly authentic.

After The Rainfall is littered with symbolic arguments, mostly surrounding the concept of an ant’s nest society governed by a queen. Memes are constantly alluded to; ideas which pass along generations and change dependent of social setting and the influence of technology, such as the printed word and latter, social networking. These fascinating suppositions are supported with dance that is choreographed to networking patterns and lines evoking the interconnecting tunnels of the ants nest. The continual use of projection deserves special praise and it is utilized perfectly here, demonstrating place and tone and avoiding the pitfall of needless gimmickry just because the technology is there. Each projection makes a statement, extending the limits of the performance space beyond that of the simple set.

Whilst After The Rainfall is a great show of ideas, characters remain a little thin and don’t really develop within the single act. Time, indeed, is rationed between intercut scenes, allowing the story and arguments to proceed quickly, but we are left with characters which aren’t wholly sympathetic. The ensemble group do, however, provide an energy and maintain interest in their movements and performance, even if their alter egos are somewhat underwritten. Also, audiences expecting neatly tied together narratives may feel a little disappointed, as possible interactions and crossovers are not fully exploited. After The Rainfall is primarily, if not wholly, engaged in ideas and debate which are cross-examined in the context of socio-historical change. A demonstration of social behaviours it may be, a neatly plotted soap story it isn’t – and neither should it be.

Provoking and imaginative, honestly performed yet technically complex,  After The Rainfall is an intriguing debate on the structure and inevitable evolution of society, rather than the personalities who happen to exist within it. Perhaps that’s the point; in truth all the characters are merely forms of drones with little independent freedom beyond that which is enforced by media and governing bodies. Smart, questioning and insightful, After The Rainfall is a fully worthwhile experience which is destined to cause much debate after the final blackout.