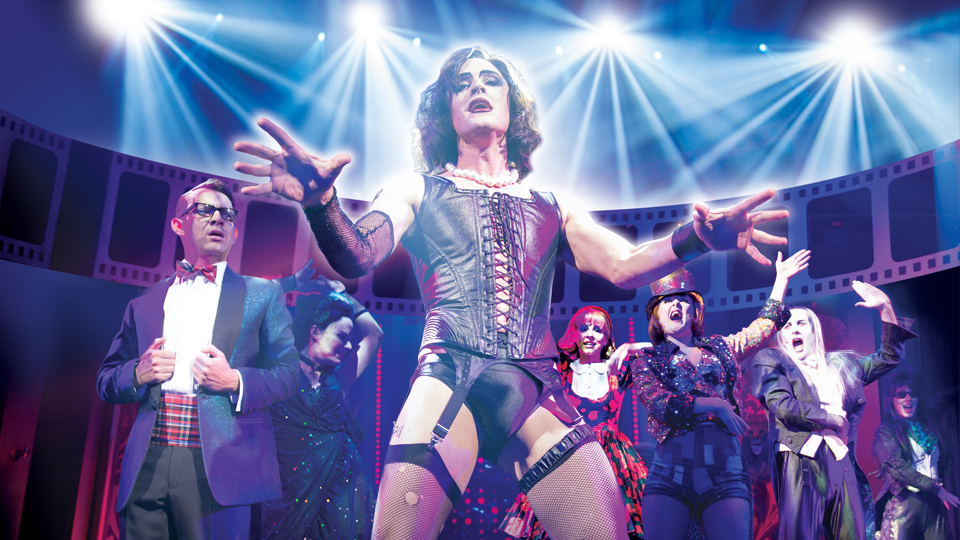 The Rocky Horror Show stops off at The Leeds Grand Theatre this month as part of its celebratory 40th anniversary tour. Conceived in 1973 by Richard O’Brien, the show ran continuously in the West End until 1980, winning critical acclaim. In 1975 a movie adaptation cultivated a cult following and contributed to an enduring legacy which continues to this day, supported by a legion of passionate fans.

The sci-fi musical is a loving parody of 1950s B-movie fare, following the journey of Brad and Janet as they stumble upon the mansion of Dr. Frank-N-Furter, a sex-crazed transvestite-scientist. Revealing his plan to build himself a muscled man to satisfy his burning desires, Brad and Janet attempt to escape but soon become embroiled in a strange triangle of sex, horror, aliens and rock ‘n roll.

Rocky Horror may be a show of high camp and rousing rockabilly numbers, but beyond the song and dance is a subversive and daring production even by today’s standards. Arresting and sexually provocative, O’Brien’s book sends out a message which remains as relevant today as it did in 1973: By placing transvestism as the predominant identity – parodying the straight cut Brad and Janet – the play asks for tolerance and open-mindedness in the expression of sexuality. It is, in short, a show of unprecedented equality, where men and women interchange roles, gender positions and sexuality with a fluidity which is purposefully questioning, challenging its audience.

As an indelible icon of musical theatre, Rocky Horror is synonymous with Tim Curry’s portrayal of Dr. Frank-N-Furter. Today, performers hoping to match Curry’s defining role know they have big stilettos to fill, and in this instance the role is given to Oliver Thornton. Pitching a physical dynamism offset by a continually seductive presence, Thornton provides an eccentricity, vibrancy and aggression which makes Frank-N-Furter both exciting and terrifying in equal measure. Vocally Thornton is pitch perfect, demonstrating great skill as both singer and dancer, cutting a striking authority figure on stage. He is supported by an ensemble who have been meticulously cast in equally iconic roles.  Abigail Jaye as Magenta and Kristian Lavercombe as Riff Raff will impress with their uncanny resemblances to their 1970s counterparts, whilst Philip Franks will delight audiences with his personable and warm interjections as Narrator. Dani Harmer and Sam Attwater deliver agreeably squeaky clean turns as Janet and Brad, whilst Ceris Hine is charming as tap-dancing flapper Columbia.

The show is a visually arresting experience with costumes that are as vampish and luscious as a Technicolor Hammer Horror. The ensemble phantoms have a refreshing punk-come-gothic aesthetic, whilst traditional icons such as Frank-N-Furter’s surgical outfit (with pink rubber gloves and pearls) happily remain unchanged. A heady mixture of the classic and the innovative, 2013’s Rocky Horror is a sympathetic and imaginative visualisation of the original concept. The set is framed within a stylish spool of 35mm film, seamlessly changing from foyer to laboratory with minimal redressing. Lighting is suitably impressive, with occasional strobe and pin-spot illuminations which give the show a genuine Sci-Fi vibe, whilst also bringing the stagecraft well into the 21st century.

Aside from its revolutionary and liberating story, The Rocky Horror Show is best known for its string of memorable musical numbers, several which have graced the charts over the years. The Time Warp remains a perennial floor-filler at wedding parties, whilst Science Fiction-Double Feature and Dammit Janet have burnt themselves into the public consciousness. Rocky Horror fans will be gratified by authentic performances of these classics, with Tony Castro’s thumping musical direction retaining the original Fifties rockabilly verve with Seventies prog-rock influences. Sweet Transvestite remains an incredibly well-directed show stopper, whilst Don’t Dream It Be It and I’m Going Home provide surprisingly lilting interludes in a show which has more heart than is often given credit. Musically, Rocky Horror remains fresh in its homage to Fifties motifs, whilst also hitting home as a thumping and uplifting glam rock extravaganza.

The sheer age and cult of The Rocky Horror Show demands a standing ovation at its rousing dénouement, if not through audience peer pressure alone. This is particularly obligatory during the reprise of The Time Warp, which undeniably celebrates the legacy of the production as much as any individual performance. The kudos, however, is well deserved; the music remains captivating, fun and funky. Performances are vibrant and imposing, technicals are constantly inventive. At forty years of age, Rocky Horror is still an unflappably impressive show as well as an established tradition. With very limited alterations and an inspirational cast, it remains an evergreen classic with a saucy punch which will inevitably shock and delight generations to come.